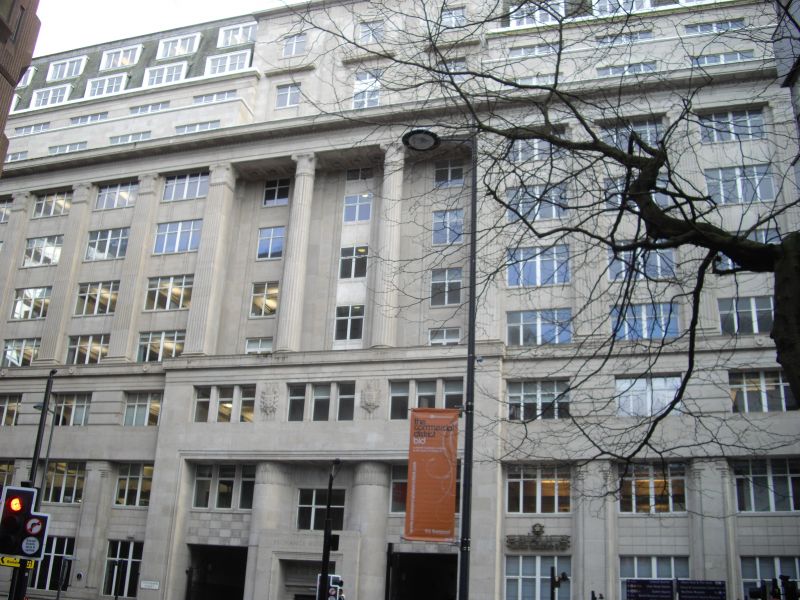 PLAN: Bunker situated within W side of U-plan complex and approached from Rumford Street to the west. War memorial in niche on main south elevation, between two passageways through the building linking Exchange Flags, the open square to the rear of the Town Hall, with Tithebarn Street to the north. Upstanding building comprises a central range running east-west with two wings extending southwards, encompassing three sides of Exchange Flags.

EXTERIOR: World War I War memorial set into a semi-circular niche in centre of main south elevation. Bronze memorial with pyramidal composition of figures grouped round a field gun. Britannia at apex wearing breastplate and antique Greek helmet, cloak, and holding a trident. Beneath her cloak she shelters a small girl. Below are depicted three soldiers, a sailor, and a nurse who tends to one of the soldiers. The niche has a mosaic-covered coved ceiling and is flanked by two engaged columns surmounted by figures representing the Family, carved in Portland stone by Siegfried Charoux. Stone inscriptions by George Herbert Tyson Smith.

The upstanding building is stripped classical, with a combination of stepped flat roofs and mansard roofs. Eleven storeys, with eleven-bay central range aligned east-west, and with eight-bay advanced wings reducing to four storeys in height to the three southernmost bays. Original main doorways are relatively small and located in the fifth bays of the advanced wings, with sculptural bas-reliefs above by Edmund C Thompson and George Capstick. Doorways supplemented by recent larger doorways in 2nd and 3rd bays of both wings, with added projecting porticos comprising two fluted columns with Corinthian capitals and entablatures with incised House names on friezes. Metal window frames in Walker House (at the time of inspection these were due to be replaced with uPVC frames in 2007) and modern uPVC window frames in Horton House.

INTERIOR: Former military command headquarters in basement of Walker House constructed on two levels, with over 100 rooms occupying almost 50,000 square feet of space. The complex is designed around a full-height central operations room, with surrounding storeyed sections containing facilities for both Royal Navy and Royal Air Force staff, including teleprinter rooms for both services, a telephone exchange, coding and de-coding rooms, radio room and security facilities. There is also an emergency generator room, which was powered by a diesel engine from a German World War I submarine. The main office floors and receptions of Walker House and Horton House were remodelled and refurbished in the late C20 and 2007 and are not regarded as of special interest.

HISTORY: The Exchange Buildings occupy the site of two earlier Exchanges. The first was built in 1803-8 by John Foster Sen., possibly with James Wyatt, in the Neoclassical style. It was replaced in 1864-7 by a French Renaissance building by T H Wyatt. The present building, designed by Gunton and Gunton, was adapted during the course of construction, with the creation of a bomb-proof bunker in the basement of Walker House (formerly Derby House) to house a military command headquarters. From this facility, which became known as the Western Approaches Command Headquarters, the campaign against the German submarine fleet in the Atlantic during World War II was planned and directed, under the command of Admiral Sir Max Horton who oversaw the Battle of the Atlantic, one of the pivotal campaigns of the war.

The War Memorial was funded by subscriptions raised among members of the Liverpool Royal Exchange Company and was designed in 1916, initially dedicated to those members of the company and their sons who had enlisted. By the time of the final unveiling in 1924 it had also become a memorial to the war dead of the Liverpool Exchange Newsroom and their sons. In 1953 the memorial was moved to its present location from the old Exchange News Room, and placed between piers supporting stone sculptures by Siegfried Charoux. The figures of a family were designed at the express wish of the directors of the Liverpool Exchange Company in order to bring in some reference to the civilian war effort.

REASONS FOR DESIGNATION
Exchange Buildings is designated at Grade II for the following principal reasons:
* It contains the bunker housing the World War II military command headquarters known as Western Approaches Command Headquarters from which the campaign against the German submarine fleet in the Atlantic was planned, under the command of Admiral Sir Max Horton
* The Battle of the Atlantic, one of the pivotal campaigns of the war, was planned and directed from the Western Approaches Command Headquarters in Liverpool, making it of national historic interest
* The bronze war memorial by Joseph Phillips was begun in 1916 and is arguably the first ever World War I memorial
* The memorial is a well-planned and executed composition, both heroic, with the depiction of armed service men culminating in a triumphant figure of Britannia at its apex, and humane, with the inclusion of a small girl and a nurse tending a wounded soldier
* The memorial is set in a purpose-designed niche in the centre of the main south elevation, flanked by engaged columns supporting stone sculptures by Seigfried Charoux, and facing the Grade II* Nelson Monument in the centre of Exchange Flags, whose pyramidal composition it echoes.
* The upstanding office building is not regarded of special interest in its own right.