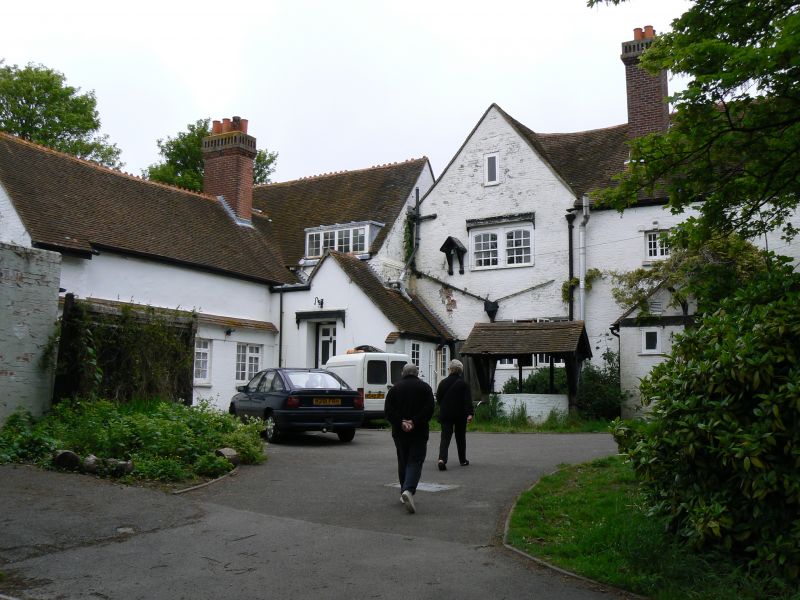 Manor house, now youth hostel. Some mediaeval masonry but mainly C17, extended early C19 and c1900 and reusing features from the Palladian mansion Bold Hall near St Helen's in Lancashire of c1730 by Giacomo Leoni, which was demolished in 1900. Brick and timberframing, now painted or rendered. Plain tile roof with brick stack on left, and on left of right bay. Half H-plan originally but courtyard was filled in c1900 to form a square and there are C19 spurs to south west and west.
EXTERIOR: Two storeys and attic, irregular fenestration, mainly multi-paned sashes. East or entrance elevation is of three bays (wide centre bay). At centre 3 stone steps approach a recessed 6 moulded panel door with eared architrave. On each side is an 18-pane fixed casement with architrave, band cornice. First floor has a tripartite sash, each 18-pane set under cambered arch. Band cornice and lead coped parapet. On left and right, each of the flanking bays has a canted bay window with 16-pane centre sash and narrow flanking 8-pane sashes, frieze and cornice; on first floor is a 12-pane sash each with attached shutters, and attic has 6-pane casement, facing lead coped gable with ball finial. Left return facing south painted brickwork with small C16/early C17 casements. Right return facing north has 2-storey rounded bay on left with three 12-pane sashes to each floor, a central wide brick, stone and flint stack and on each side a pierced brick parapet, small dormer casements. On far right is a mid C19 1-storey extension with rounded end and attic, at one time a chapel and a further mid C19 extension to south.
INTERIOR: Entrance from the east is into a full-height hall constructed c1900 which contains two curved staircases and a gallery made from turned balusters and newelposts of c1730 from Bold Hall, re-constructed in the first decade of the C20. The room to the west has exposed C17 beams and the stone fireplace is probably an early C20 copy. The four reeded pilasters on each side, dado rail and six-panelled doors of early C18 date are likely to have come from Bold Hall. The Dining Hall opening out of the Entrance Hall to the south has a C17 spine beam with lambs tongue stops and cornice on two sides with Greek key design and a very wide early C18 doorcase with decorative iron hinges, triglyphs and carved decorations. There is a restored wooden fireplace, probably Mediaeval, with carved spandrels and beside it a Gothick headed doorcase. The Common Room, which opens out of the Entrance Hall to the north has a C17 spine beam and moulded floor joists and the curved bay retains original early C19 shutters. The large ground floor room with curved bay to the north west has an early C19 cornice. Upstairs the landing has a dado rail and the cornice continues from the Entrance Hall. Bedroom 1 has a massive jowled post exposed in the corner and early C18 painted panelling with dado rail, probably from Bold Hall. There is reputed to be a small Priest's hole under the floor of a cupboard. Bedroom 6 has painted Jacobean panelling to one wall, early C18 panelling to the others, a two-panelled door, moulded cornice and an early C19 cast iron fireplace with panel of female sphinxes and pilasters of bamboo type. Further c1730 staircase balustrading from Bold Hall leads to the attic which has a C17 roof with purlins and diagonal braces. Remainder of roof not seen.
HISTORY: A Pre-Conquest manor belonging to the crown. The Half H-plan building was constructed by the Bruning family who held the manor between 1562 and 1707. Between 1761 and 1873 the building was used as a vicarage. The Reverend George Nugee, who lived here between 1859 and 1872 and ran a small college to train for overseas missions, built a chapel, the tower of which has since been demolished. The c1900 alterations were carried out by Thomas Knollys Parr,a descendant of Henry VIII's sixth wife, who was in residence between 1900 and 1938. They incorporated features from Bold Hall near St Helen's in Lancashire, which was demolished in 1900 because it had become isolated amongst coalmines. The works were completed by 1908, when they were decribed in the Victoria County History. The building has been used as a Youth Hostel since 1960.
Further research and building works may reveal further fabric earlier than the C17, but this is an interesting and historic C17 and earlier manor house with high quality C18 and earlier fittings, many resited c1900 from the demolished Palladian mansion Bold Hall in Lancashire.