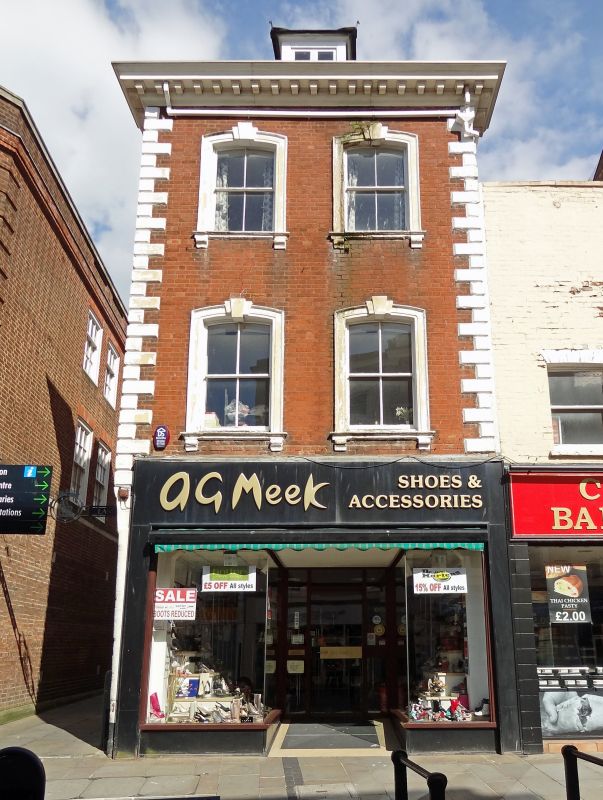 Shop and dwelling including part of earlier house; now shop,
on the north-east corner of St John's Lane. Front block early
to mid C18 with a late C16 wing retained at rear. Front block
of red brick with stone dressings and hipped slate roof with a
hipped roof dormer, rear wing of brick encapsulating some
timber-framing, and gabled slate roof. Double-depth block
front block and rear wing of three bays; the left-hand side of
the rear wing was pared down when the front block was rebuilt
and the lane widened in the early/mid C18.
EXTERIOR: front block three storeys and attic, rear wing two
storeys. Front on the ground floor has a mid C20 shop-front,
the upper floors of red brick with raised and chamfered stone
quoins to the outer corners and a timber, crowning modillion
cornice with a short return on the east side of the block and
a return along the west side in St John's Lane, on the front
in each of the upper floors two mid C19 sashes with central
vertical glazing bars replacing earlier sashes, all in
original openings with segmental-arched heads and moulded
stone architraves with a triple raised keystone in each arched
head and projecting stone sills on moulded end-brackets; in
the roof dormer a pair of casements.
INTERIOR: no visible features of interest in the front block
or the ground floor of the wing; in the wing on the first
floor is a 3-bay arch-braced roof with ovolo-moulded
principals and central pendentives; this room was enriched in
the early C17 by decorative plasterwork of exceptional quality
and interest, including richly moulded plaster panels to
walls, the chimney breast with caryatids to overmantel in the
centre of the east wall, and to the coved ceiling rising
between the exposed feet of timber trusses. Of principal note
for the quality and interest of the interior, a rare and
important survival in this urban context.
(National Monuments Record).