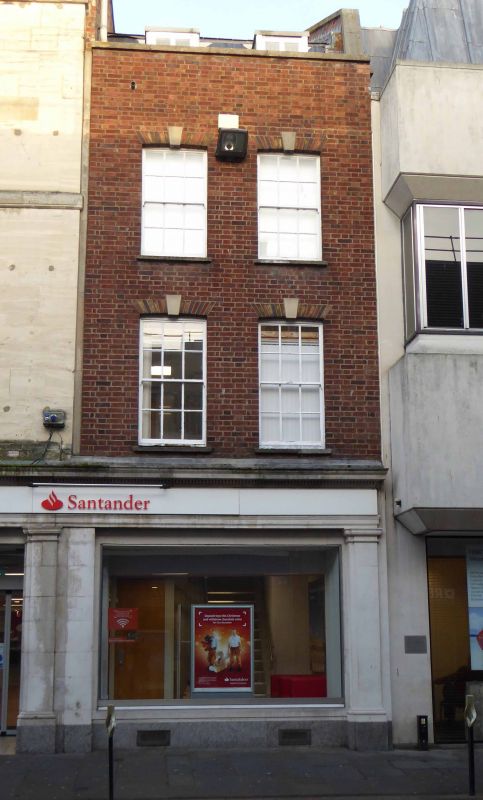 Shop and dwelling, now offices, linked with Nos 8 & 10
Westgate Street (qqv) as part of an integrated block of office
suites. Mid to late C18 with earlier, possibly C16, structure
in rear wing altered in early C18; other C19 and C20
alterations (principally c1990). Brick; slate roof, including
large slates of early type, with flat-roofed dormers.
Double-depth block front block with the upper floors of the
rear wing partly separated from block by a light well.
EXTERIOR: three storeys and attic; the front on the ground
floor remodelled in C20 with large C20 window framed by stone
pilasters and an entablature continued across the front on
No.8 Westgate Street to left; the upper floors in dark red
brick with two sashes with glazing bars (3x4 panes) on each
floor in openings with rubbed brick flat arches set with
raised keystones; crowning parapet with stone capping; two
attic dormers each with a pair of plain casements. The exposed
west side of the rear wing painted white, on the first floor
three early C18 sashes with thick glazing bars (3x6 panes) and
on the second floor the C19 sashes with central vertical
glazing bars.
INTERIOR: noted for the "Tudor Room" in the wing on the first
floor which is entered from a lobby off the main staircase in
No.8 Westgate Street; in 1895 the C16 panelling in the room
restored and re-ordered, with additional panelling brought in
by GA Howitt; in the west wall the window embrasures with
early C18 fielded panel shutters, on the other three walls C16
panelling incorporating zones of linenfold panels framed by
barleysugar shafts; in the north end wall the fireplace with
moulded surround and a frieze of linenfold panels above; some
panels carved with heraldic devices including the arms of King
Henry VIII, the pomegranate of Katherine of Aragon, and the
monogram "TP" for Thomas Payne, Sheriff of Gloucester; also
panels carved in relief with heads in profile. Beyond doorway
to right of fireplace the stair turret at rear of wing
contains a rebuilt early C18 staircase, the square newels with
attached barleysugar half-balusters, the other balusters
removed and apparently reused by Howitt to frame some of the
linenfold panels in the Tudor Room.
HISTORY: Nos 6 & 8 (qv) Westgate Street are the site of Thomas
Payne's mansion where tradition states that he entertained

King Henry VIII and Anne Boleyn in 1535, and the panelling now
in the Tudor Room may have been made for this occasion. Payne
was Mayor of Gloucester in 1540 when Gloucester received the
King's Charter. No.6 is of principal note for the outstanding
quality and interest of the Tudor Room, within the context of
Renaissance inspired English interiors of the period.