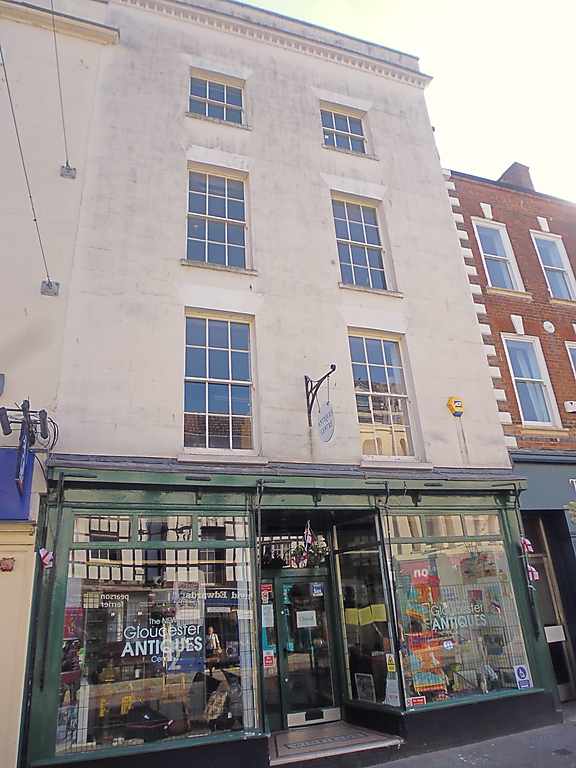 Shop and former dwelling flanking the west side of Maverdine
Passage, warehouse and office buildings added at rear and
linked by bridge over the passage to offices at the rear of
No.24 Westgate Street (qv). Late C15, greatly enlarged and
remodelled in late C16/early C17, and altered in early C18;
altered 1772 for William Bishop, grocer; refronted and altered
internally c1815; altered and extended from 1886 for
Winfields, Seed Merchants.
MATERIALS: timber frame, partly rendered, standing on
ground-floor walls of stone rubble and brick; the rear of the
elevation facing Maverdine Passage has retained some C17
limewashed comb-decorated render (a significant and rare
survival); in late C18 the street front rebuilt in brick and
now painted, brick extensions at rear, brick stacks, plain
tile and slate roofs.
PLAN: a long range in two parts at right angle to street; to
rear is a late C15 three-bay range and to front a mid C16
two-bay range; late C16/early C17 three-bay range with cross
gabled dormers and a gabled stair turret in the north-west
corner, clearly replacing earlier range; on the ground floor
the full length of both parts of the range now a large shop
area, but at upper level 4 phases of the c1575-1620 building
are discernible (see Price); gables added to mid C16 front
bays when 3 bays to centre built c1600, which connected it to
rear stair turret and outward extension to Maverdine Lane;
presence of first-floor door to stair turret suggests former
existence (prior to c1600) of gallery which connected front
and back ranges; late C19 extension at rear linked by first
floor bridge over Maverdine Passage to C19 warehouse and
offices not included in item behind No.24 Westgate Street
(qv).
EXTERIOR: the longer front part of the range of four storeys,
cellar and attic; the rear part of the range of three storeys,
C19 extensions of three storeys. The early C19 front to street
has a crowning cornice with close set modillions and a parapet
masking the attic, on the ground floor a late C19 shop-front,
on each of the first and second floors two tall sashes and on
the third floor two short sashes, all with glazing bars (3x2
panes on the lower floors, 3x2 panes on the third floor) and

in openings with painted brick flat arches and projecting
stone sills.
The elevation of the higher south part of the range facing
Maverdine Passage retains elaborate late C16/early C17
architectural features and detail; the ground floor of rubble
wall believed to contain reused Roman masonry; on the
timber-framed upper floors the south bay is masked by the
adjoining side of No.24 Westgate Street, on the four exposed
bays the first and second floors are jettied with close
studding, the bay posts are decorated with pairs of shafts
with knee brackets below the moulded bressumer to the
second-floor jetty; on the first floor in each of the three
right-hand bays a timber oriel window capped by the
second-floor jetty and supported on carved end brackets, and
with five casement lights with ovolo-moulded mullions and an
upper transom; on each of the second and third floors a
similar oriel window in each bay, except where replaced by a
later and smaller casement in the third bay to left on the
third floor, each oriel capped with a shallow gable like a
pediment; in each of the dormer gables a four-light casement
with timber mullions and an upper transom; the three gable
dormers to right have stepped barge boards. The lower and late
C15 three-bay range to the right (rear from Westgate Street)
is jettied at first and second-floor levels and has exposed
storey posts on the first-floor with brackets to the
second-floor jetty, otherwise rendered panels, in the central
bay on the first floor an early C19 sash with sidelights and
glazing bars; on the second floor a casement pair to left and
a sash to right, both with glazing bars; between them,
off-centre to right, a late C16 projecting blocked casement
with sill supported on carved brackets.
The gable-end wall to rear of range also jettied at
second-floor and gable levels but masked by C19 extension. On
the west side of the front part of the range, above No.28
Westgate Street (qv), four gabled dormers similar to the
dormers on the east side but with rendered framing.
INTERIOR: on the ground floor several exposed bridging beams;
to right stairs to first-floor lobby, lined in part with late
C16 panelling, giving access to a large first-floor reception
chamber formed to the rear c1815 as part of conversion to
Judges' Lodgings, and fitted with moulded skirting, dado rail,
moulded plaster cornice and two acanthus moulded ceiling
roses; in other rooms exposed timber-framing and chamfered
storey posts; on west side a stair well with early C18 open
well staircase from first to second floor with closed string,
barleysugar balusters and toad back handrail, from second to
third floor the stair is probably early C17 with knopped
newels and bulbous turned balusters; on the third floor in the

front room, in several of the oriel windows on the east side,
are early C17 wrought-iron casements with original elaborately
patterned leadlight glazing and original iron catches.
HISTORY: an exceptionally fine merchant's house, notable for
the quality of its surviving detail which includes (rare)
original surviving patterned leaded glass, which is one of the
most substantial timber-framed merchants' houses to have
survived in any English town. The house was the Hall of the
Grocer's Guild in the C18 and used as the Judges Lodgings in
the early C19. The formerly impressive multi-jettied front was
recorded by JC Buckler in the early C19. The ground-floor
front room was panelled, with the Browne arms to the
overmantel (Alderman John Browne is recorded as the owner
before 1585).
Scheduled Ancient Monument.
(VCH: The City of Gloucester: Oxford: 1988-: 120; BOE: Verey
D: Gloucestershire: The Vale and the Forest of Dean: London:
1976-: 224; Price S: 26 Westgate Street: A Report for English
Heritage: 1994-).