Church of St George the Martyr 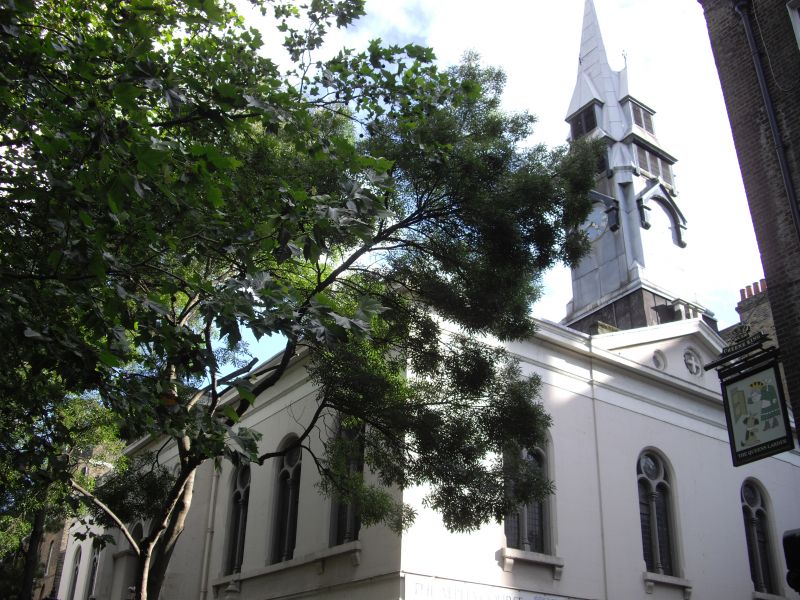 Church. c1706. Built by Arthur Tooley, repaired late C18.
Recast 1867-9 by SS Teulon and restored 1952 and 1989. Stucco
with rusticated lower portion. Single storey, rectangular plan
with chancel to the south added by Teulon who almost entirely
altered the exterior.
EXTERIOR: Queen Square facade with Gothic porch to right of
pedimented central projecting bay with 3 buttresses, the
central buttress forming a column between two architraved,
round-headed windows and an architraved oculus above.
Buttresses surmounted by statues of praying angels. Beneath
the windows 4 roundels containing carved reliefs of the
symbols of the 4 Evangelists. To either side of this bay, 3
rounded-arched, traceried windows. Entablature and projecting
cornice. Cosmo Place return pedimented with central
round-arched entrance and 4 windows. Over west end, small
square-plan tower with Gothic canopies (east face shielding a
clock), and surmounted by zinc covered spirelet with louvred
gablets.
INTERIOR: also remodelled, the present column and roof system
being inserted by Teulon who took down all the galleries save
that to the north which he retained and remodelled.
Fittings: the fine original reredos was retained on the east
wall when Teulon reordered the church with a new south chancel
with full fittings including a reredos with mosaic inlay.
Stalls, pulpit, lectern, parclose screen and altar rails also
by Teulon; other fittings include font, organ and case.
HISTORICAL NOTE: St George the Martyr was built as a chapel of
ease for St Andrew's, Holborn, and became a parish church in
1723.