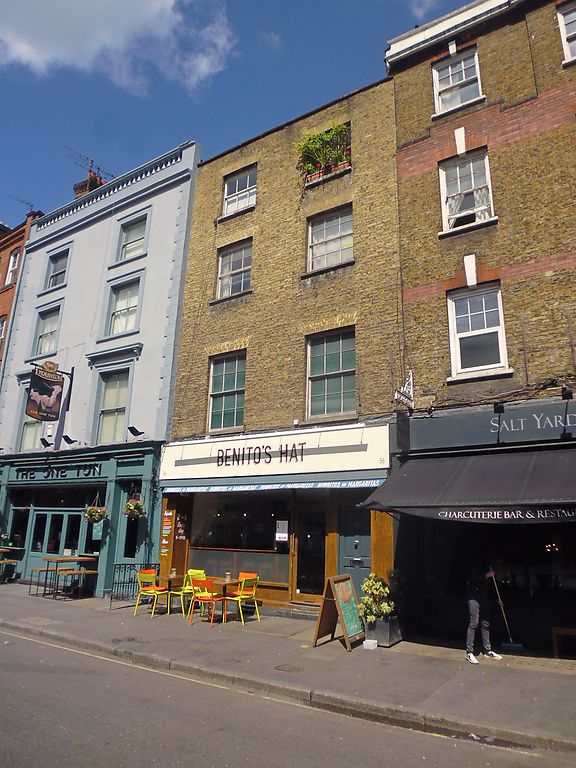 House, now with ground-floor restaurant. c.1760 on land held by the Goodge family. Brown brick, mansard slate roof behind parapets, party wall stack. Four storeys and basement, the uppermost treated as an attic at rear. Regular two-bay plan, with staircase at rear and two main -ooms pel- floor. EXTERIOR. Ground floor altered in C20. Above is a regular facade in which five of six C18 sash windows survive with small paned glazing bars under gauged brick heads. At rear the ground floor is built out. First floor with projecting bow, a rare feature, with C20 door on to protruding roof set between two sashes with glazing bars. Attic room window with horizontal sliding sash, an extremely rare feature in London. INTERIOR. The ground floor has been altered, but from it rises a fu1l-height C18 staircase with gendy moulded handrail and newel posts, and stick balusters. Dado rail and thick skirting board give impression that lower wall is panelled; their proportions are clearly carefully considered. Many original doors. Dado panelling survives well in first-floor rear room. Second floor rooms with box cornices, and panelling over and around cupboards set in fireplace reveals. Third floor survives particularly well, with cupboard at top of landing, simple, unmoulded doors and C19 cast-iron fireplaces. Goodge Street was built following an application in 1758 by Francis and William Goodge to the Commissioners of Sewers. This house is a remarkably complete survival.
Source: Survey of London, vol.XXI, 1949, pp4, 34-5