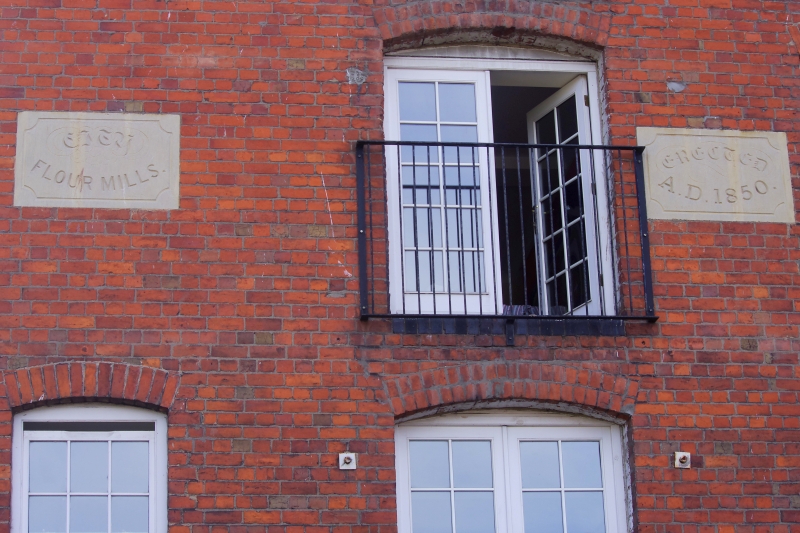 Flour mills, warehouse and office block. 1850 and probably
1854. Built for J and J Hadley, millers; the warehouse damaged
by fire 1888 and partly rebuilt incorporating silos for the
storage of wheat in bulk; a large wing on the south side
facing Commercial Road and containing additional silos added
c1898; a large concrete silo added 1964 is not included.
Brick, ashlar, timber hoist housings, slate roofs.
PLAN: one block comprising two parallel, end-gabled warehouses
at right angle to Commercial Road, the earlier and smaller of
the two on the east side, C20 extensions on the west side of
the larger warehouse; adjoining to the south-east the office
block facing south with wing to rear left.
EXTERIOR: the east warehouse of four storeys and attic, the
south warehouse of five storeys and attic, both with loading
door openings in the centre of their end-gabled walls.
West warehouse in the gable-end walls on each side of the
loading doors on the upper floors has hinged casements with
glazing bars in openings with brick segmental arches, on the
ground floor a carriageway to left in the south gable-end wall
with a semicircular brick arch set with a projecting keystone;
a projecting, gabled, timber winch housing to the loading
doors to the upper floors with louvred openings to each floor.
The south elevation of the office block, c1850, faced in
ashlar, has an offset plinth and a crowning cornice with
blocking course; three stone steps to central doorway with
rectangular fanlight, the opening framed by a moulded
architrave and floating cornice on moulded consoles, panelled
double doors and margin lights in the fanlight; on each side
of doorway a C20 casement and on the first floor two original
sashes with glazing bars (3x4 panes) in original openings with
projecting stone sills; the later C19 rear wing of brick has
sashes with central vertical glazing bars.
INTERIOR: not inspected.
(Conway-Jones H: Gloucester Docks An Illustrated History:
Gloucester: 1984-: 168).