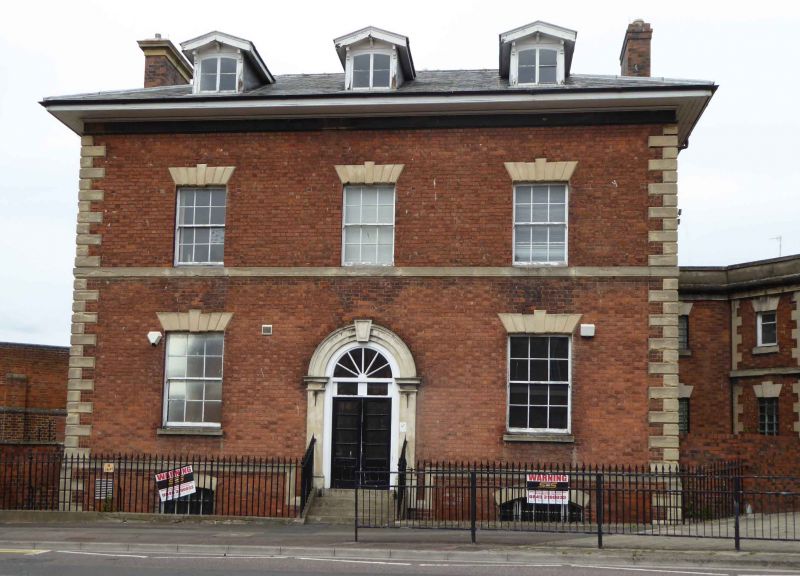 Former Prison Governor’s House built in c.1850, incorporating the c.1789 tower to the south-east angle of the prison’s perimeter wall. There are C20 alterations. Not included in the listing are the C20 interior fittings.

PLAN: a rectangular double-depth plan which projects slightly forward of the south flank of the prison's perimeter wall. The east side of the house is connected to an octagonal tower.

EXTERIOR: a two-storey house with attic and basement, beneath a hipped roof with slate roof tiles and wide, boxed eaves. The principal elevation (south) is arranged as three-bays, with stone capping to the offset basement wall, which turns downs on either side to meet the base of the central doorcase. There is a stone cill band at first-floor level and raised and chamfered stone quoins. The central double-doorway, which is partially glazed, is set within a stone doorcase of pilasters with Doric capitals and a moulded, semi-circular arched head with raised keystone. The fanlight has radiating glazing bars. The doorway is flanked by windows to the ground floor and there are three windows to the first floor. The windows are six-over-six sash windows beneath flat-arch lintels with keystone and voussoirs. To each of the outer bays of the basement is an eight-over-eight sash window beneath a segmental stone-arched lintel with raised keystone. There are three, low-pitched, gabled dormer windows to the roof with plain barge boards, each with a pair of casements with single horizontal glazing bars. The side (west) elevation is of three bays with cill band and window details similar to the principal elevation. Between the second and third bay is a brick chimney stack which rises above the eaves with a stone capped plinth and stone cornice. To the left is a dormer window. To the rear (north) elevation is the iron stair window. The side (east) elevation has a stone cill band and a central, six-over-six sash window to the ground and first floor, and an additional window to the left of the first-floor, with details similar to the principal elevation. The two-storey east wing is lower than the main house and has a tall ashlar plinth with an offset base course and moulded capping. The tower has a stone plat band and raised stone quoins at the angles, and a bull-nose crowning cornice with stone parapet above. On both floors are C20 fixed light or hopper sashes in openings with stone flat-arched heads with raised keystones and a voussoir either side. The windows to the right side are blind. There is a tall brick stack on the east side of the tower.

INTERIOR: to the basement is the former kitchen and there was a mid-C19 cast-iron range set into an opening spanned by a stone flat arch with a projecting keystone (1973). This is now (2013) concealed by boarding. There are further service rooms in the basement including one that was heated by a corner stack. To the ground-floor are two large reception rooms with a smaller room and stair at the rear, with a similar arrangement to the first floor. Former servant’s accommodation is to the attic where there are two mid-C19 cast-iron fireplaces. The interior retains much of its original joinery to the ground and first-floor rooms including skirting boards, moulded cornices, and door and window joinery. The doors have been replaced with C20 fire doors and the fireplaces have been removed with the exception of those to the attic. The principal staircase has been boxed in and concealed. The staircase to the basement is mid-C19.
Pursuant to s.1 (5A) of the Planning (Listed Buildings and Conservation Areas) Act 1990 (‘the Act’) it is declared that the C20 interior fittings are not of special architectural or historic interest.

SUBSIDIARY FEATURES: to the front of the house are mid-C19 cast-iron railings with spearheads. There is a stone bridge of three stone steps over the basement area to the central entrance doorway.

The former Her Majesty's Prison Gloucester occupies the site of the 'new' C12 castle (the 'old castle' was located to the east) built in the reign of Henry I, which came to be used as a gaol by the reign of Richard III. Many of the castle buildings were demolished in the late C15 and C16, and the stone used for the construction of the new Boothall and for road repairs. By the mid-C17 only the keep (used as the gaol) and the main gatehouse survived. The gaol walls were rebuilt and a brick bridewell (a prison for petty offences) was built to the north of the keep. The conditions of the gaol were favourably reported in c.1650, 1683 and 1714. However, by 1777 John Howard, the penal reformer, was critical of the gaol on a number of counts: the state of repair of the buildings, the overcrowding, and the generally poor welfare conditions. In 1780, Sir George Onesiphorus Paul (1746-1820) was appointed High Sheriff of Gloucestershire and, despite repairs to the gaol in that year and 1782, he concluded that it was in a ruinous state in 1783. He proposed a wholesale reform of the penal system, in line with Howard's recommendations, and that five bridewells and a county gaol be erected in the county. As a result, a working party was formed that secured a private Act of Parliament in 1785 to get permission to build a County Gaol at Gloucester and five bridewells at Dursley, Bristol, Gloucester, Littledean and Northleach. The bridewell and County Gaol were to be co-located in Gloucester.
Built in 1786-1791 the new gaol was designed by the architect William Blackburn (1750 – 1790) and employed a courtyard plan which consisted of a square with four, three-storey wings extending to the north and south from each corner of the square. The prior gaol buildings, including the castle keep, were demolished to make way for the new prison. Blackburn was a prolific architect during his short career, and he designed seventeen prisons and produced schemes or was asked for advice at five other sites. John Howard described Blackburn as 'The ingenious Mr Blackburn… the only man capable of delineating my idea of what a prison ought to be.'
From the early C19 attitudes to penal methods evolved and prison populations increased, leading to a number of changes to prison regimes and requirements. In 1818 a triangular parcel of land to the east of the site was acquired by the prison authorities, and in 1826 a new section of perimeter wall was built along Barbican Road. A new outer gatehouse was erected at the north-east end of the wall, and a new debtor’s prison was built to the east of Blackburn's gaol. These structures were designed by the County Surveyor John Collingwood (c.1760-1831), and the debtor's prison was described by G. W. Counsel in his book, History of Gloucester (1829): ‘[a] very handsome edifice has lately been erected for the confinement of debtors from the design of Mr Collingwood, an eminent architect of this city’. In 1844-50, a new prison was built to the east of the Blackburn gaol, probably by County Surveyor Thomas Fulljames, which comprises the Central Block of the former HMP Gloucester. Three-storey wings were added to either side of Blackburn’s original gatehouse and a block containing a chapel was built to the west, connecting with the Blackburn gaol.

The original Governor’s House, which was semi-circular in plan, was located within the prison walls at the east end of the site looking out onto Blackburn’s gatehouse. The Governor’s House was relocated outside the south perimeter wall c.1850 and incorporated an octagonal tower that appears from its position and its construction technique to have been part of Blackburn’s perimeter wall of c.1789. Between 1910 and 1930, the remaining parts of Blackburn’s gaol were demolished, with other C18 and C19 ancillary buildings cleared in the 1970s. In 1995 the Governor's House was being used as the officers' mess and a training centre. The building is attached to the Perimeter Wall (qv) at the east end. The prison closed in 2013.

The former Prison Governor’s House built in c.1850, and incorporating the c.1789 tower to the south-east angle of the prison’s perimeter wall, is listed at Grade II for the following principal reasons:

* Architectural interest: a confident example of a mid-C19 governor's house with a good composition and architectural detailing;

* Historic interest: for the incorporation of the tower, probably by William Blackburn c.1789, which formed part of the prison’s original perimeter wall. It also illustrates how prison design developed to relocate the governor’s house outside the perimeter wall. It stands on the site of the former C12 Gloucester Castle;

* Interior: there has been some alteration to the interior but the plan form remains legible, with some survival of historic fixtures and fittings, in particular, the joinery and the mid-C19 cast-iron range to the basement, which is understood to survive beneath the later boarding;

* Group value: the governor's house forms an important part of the prison complex, having group value with a number of other listed Gloucester prison buildings and structures, including the perimeter wall (Grade II).