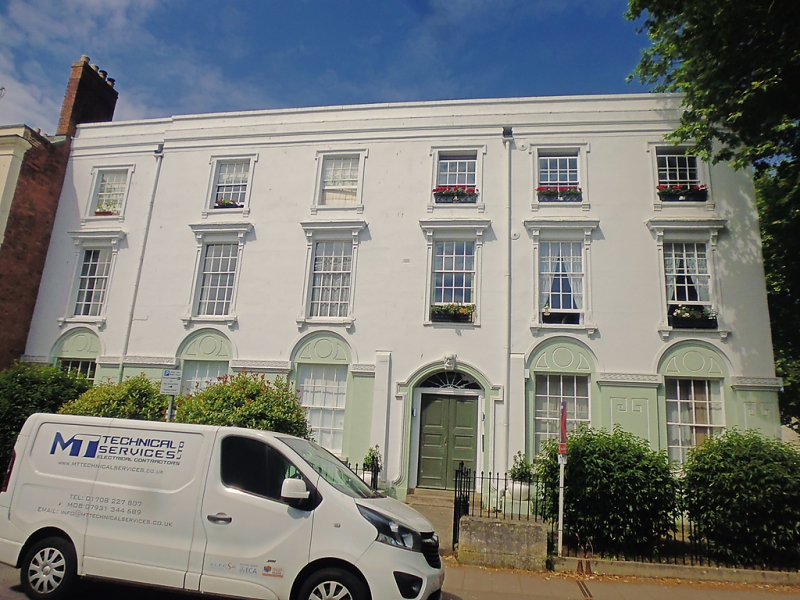 Hotel. 1829, for John Phillpotts, from 1860 a college for
young ladies called Ribston Hall; altered for use as art
school annexe 1970. Stuccoed brick, probably slate roof. A
large rectangular block with projection to rear right; the
facade set back behind a paved railed area, with the former
formal garden with railing to the right.
EXTERIOR: three storeys; the front of five symmetrical bays
and a slightly recessed, narrower sixth bay at the left hand
end (1 + 5); offset plinth, crowning entablature from which
the cornice has been removed and shallow coped parapet.
On the ground floor the entrance doorway in the central bay of
the symmetrical five bays, formerly within a porte cochere now
demolished but indicated by flanking pilasters; the doorway in
a wide segmental-arched opening with a moulded, eared and
shouldered architrave frame and with a raised keystone in the
arch carved with a mask; moulded door frame and a decorative
fanlight with radiating bars; fielded six-panel double doors;
other ground floor bays treated as an arcade in which the
faces of the broad piers are each decorated with a Greek
Revival pattern channelled into the stucco and are capped by
moulded imposts, the face of each impost decorated with a
panel of incised Greek key pattern; the arches have plain,
raised architraves each enclosing a recessed tympanum
decorated with a simple, repeating, incised pattern.
In each opening a sash with glazing bars (4x4 panes) and
between the piers a stone sill projecting at each end on
moulded brackets; on the first-floor sashes with glazing bars
(3x5 panes),the openings framed by shouldered architraves,
moulded cornices on end-brackets,and sills with projecting
ends supported on moulded end-brackets; on the second floor
shorter sashes with glazing bars (4x4 panes) in openings with
moulded eared architraves and projecting stone sills on
moulded end-brackets.
The east return elevation (garden front): on the ground floor