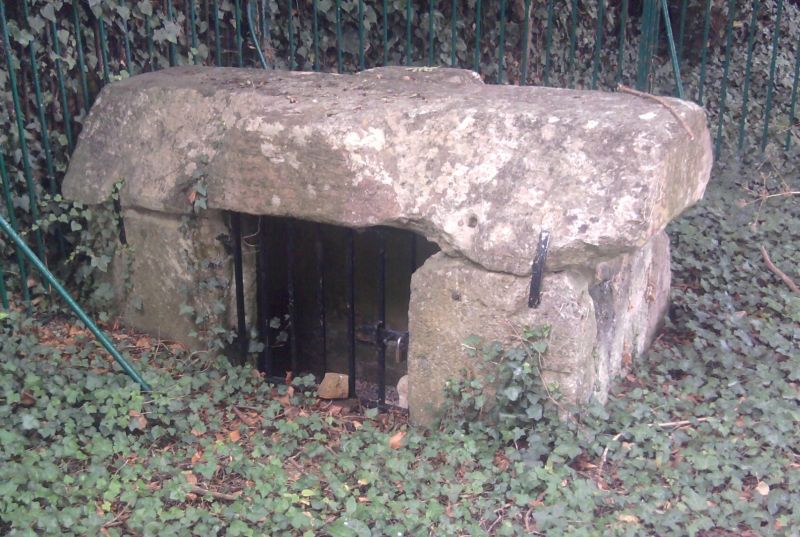 Well head or cistern above the intake to a pipe laid down
initially to supply water to the Benedictine Abbey of St Peter
in Gloucester. C12 or C13
EXTERIOR: built of dressed oolitic limestone slabs held by
iron cramps; a low, rectangular structure of vertical slabs
supporting a cover or roof slab approximately 2m in length and
30cm thick; the top of the roof slab is dressed in the form of
a flat cross defined by a chamfer at each corner of the slab;
drilled into the horizontal face of the cross and six holes
5cm deep and 2.5cm diameter symmetrically placed and thought
to be the fixing holes for a lead or bronze cross which
formerly stood on the slab; an inspection opening between the
two wall slabs on the east side is fitted with a late C20
timber door replacing an earlier door, the iron strap hinges
are possibly reused.
HISTORY: this is possibly the structure mentioned in a grant
made by Philip of Mattesdon (Matson) to Abbot Reginald,
1163-1184, when the abbey was allowed to collect into an
existing cistern the outflows from springs at a higher level
on the hill. The right to pipe water from the springs on the
hill to the abbey was confirmed by William Geruad of Matson
who, at the same time, granted a similar right to the Grey
Friars c1230. In 1355 a dispute between the abbey and the
friary about interference in the supply of water was resolved
by Edward, the Black Prince, at the behest of King Edward I;
the judgement confirmed by a licence from the king which
allowed the friars take one third of the supply of water from
the hill. In 1483 the friars granted three quarters of their
supply of water to the bailiffs and community of Gloucester.
With the Well House (qv), this is of outstanding significance
in a national context for its rarity and importance as part of
a medieval water supply system; there is a reservoir in the
Cathedral Precincts which was built in conjunction with a
drain supplying water in the cloister and lavatorium in the
former Abbey of St Peter.