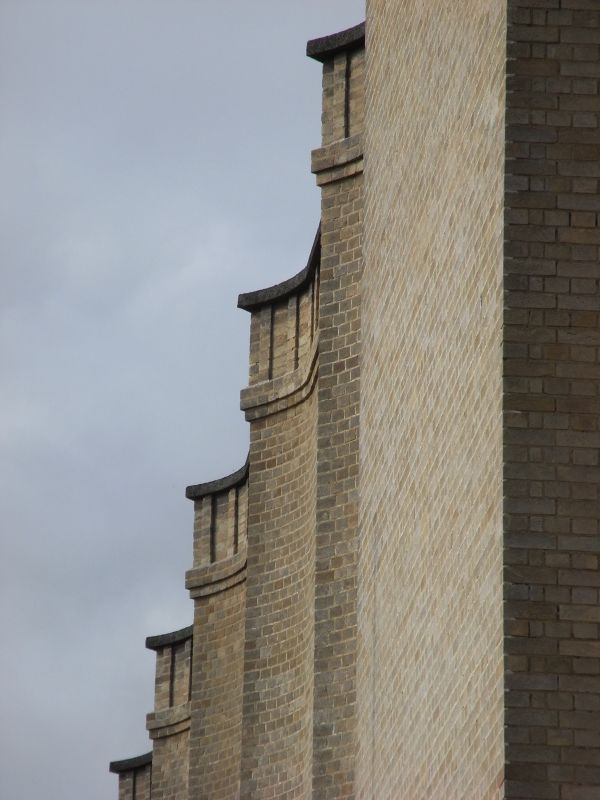 An Anglican parish church, dating from 1938-9, by N F Cachemaille-Day (1896-1976) for the Gloucester Church Extension Society, and its boundary walls; the church uses a combination of C20 construction and traditional form, with minimal Gothic detailing.

An Anglican parish church, dating from 1938-9, by N F Cachemaille-Day (1896-1976) for the Gloucester Church Extension Society, and its boundary walls; the church uses a combination of C20 construction and traditional form, with minimal Gothic detailing.

MATERIALS: a reinforced concrete frames, with external wall faces and internal infill panels of pale buff handmade brick; the window openings have concrete frames; the roof is flat, a concrete slab and composition roof. The chancel floor is Granolithic, with herringbone-laid blond woodblocks to the nave.

PLAN: a long, rectangular nave with a short bay at each end and wider intermediate bays (a 1:4:1 pattern), entered through a narthex to the west; a taller, two-bay chancel which returns at the east end to provide access to vestries; the wider north aisle is fitted as a chapel; the south transept forms the base of a short belfry tower; at the junction of nave and the tower, a low, projecting stair turret with canted angles provides access to the pulpit and organ loft.

EXTERIOR: the very lofty, flat-roofed building is set on a high plinth, with the main body of the church between a low west narthex, and eastern vestries, each of which rises to the height of the plinth. To both sides of the nave and the chancel, the bays are defined by slender, triangular projections which rise to full height; the projections are incorporated into the shallow parapet decorated with a blind fret over the nave, and the taller parapet with pierced openings in panels in the parapet over the chancel. To both sides of the nave in each of the four wider bays is a tall and very narrow window, with attenuated Gothic tracery high up under the flat head; on both sides of the chancel in each bay is a similar window, and in the east wall a closely-set group of five similar windows, all in frames carried up into the parapet, where they enclose decorative carved panels. To the south side is a short tower above the transept, rising only a little above the height of the roof, and surmounted by a tall concrete cross; a central, canopied niche supported on a corbel; and a two-light window with panels above on each side of the niche. The east and west sides of the tower have central triangular projections on corbels, flanked by similar two-light windows. At the south-west corner of the tower is a low, projected stair turret with canted angles. In the west and south sides of the low, flat-roofed narthex are doorways with elliptical arched heads. The vestries to the south-east corner and the east have lancet windows, one to each bay, as does the chapel in the low, flat-roofed north aisle, which is continuous with the vestries and runs along the north side of the chancel.

INTERIOR: the church, which is austere and dramatic, has a long, high rectangular nave with a short bay at each end and four wider bays between. The space is entered through the low south door of the west narthex, which has doors to kitchen, lavatories and other facilities, and into the west end of the nave. The doors, in common with all those in the church, are set under elliptical arches. The interior of nave and chancel are very lofty; in the nave, the roof has intersecting concrete beams supported by curved braces to canted wall piers which articulate the bay structure; while the roof in the chancel, though superficially similar, is supported by intersecting concrete arches; both give the appearance of vaulted ceilings. The impression of a chancel arch is created by a pair of similar piers. The narrower chancel has an organ gallery to the south, above a low ambulatory, to the west of which is a semi-circular, reeded timber PULPIT of 1938-40, set against the nave wall, which hangs at first-floor level, and is accessed by the stair in the turret, which also serves the organ gallery. To the north, the low aisle houses the Lady Chapel, the arcades now glazed. The chancel is set up two steps. The east wall is articulated by layered arched recesses giving the impression of a reredos. The interior is lit by moulded, wall-mounted uplighters of the 1980s.

PRINCIPAL FITTINGS: the octagonal stone FONT, dating from the C19, was brought to St Barnabas from the Church of St Mary in Kempley, Gloucestershire; the broad timber font cover dates from 1938-40. Of the same date are the CHANCEL STALLS, which lead to twin ambos [reading desks], all of timber, matching the pulpit. The east window contains STAINED GLASS by Christopher Webb (1886-1966), and dates from 1940. In the Lady Chapel is stained glass resited from the temporary Church of St Barnabas.

SUBSIDIARY FEATURES: the plot on which the church stands is bounded on two sides by low walls of matching pale buff brick, with a pitched coping.

The parish of Tuffley lies in the suburbs of Gloucester. In 1907, the former Tuffley Board School building was converted to a temporary mission church to serve the newly-created Tuffley Conventional District, and dedicated to St Barnabas. As suburban expansion continued and the population of Tuffley grew, a temporary timber-framed aisled church was built, next to the former school building. In May 1930, St Barnabas was created a parish in its own right, and fundraising began to build a new, permanent church. The church was one of three at the time to be deliberately built on principal routes out of the city, along with Holy Trinity, Longlevens and the temporary church at St Aldate, Findlay Road (replaced by a permanent church in the 1960s).

St Barnabas, built in 1938-40, was designed by Nugent Francis Cachemaille-Day (1896-1976), a prolific architect of high Anglican churches; his experimental designs were sometimes more radical than the churches eventually built, but at St Barnabas, the church appears to have been constructed almost exactly as designed. Cachemaille-Day is a widely-respected ecclesiastical architect, thirteen of whose churches are listed at Grade II or Grade II*. The planning of the church was influenced by the liturgical movement, which called for the abandonment of traditional styles, and encouraged the use of new materials and innovative planning.

Construction of St Barnabas, undertaken by local builders T W Nicholls and Son, began in 1938, at a cost of circa £13,400. The new church was consecrated by Bishop Headlam on 28 September 1940. It has been little altered since then; the windows were partly renewed in 1977, and the facilities at the west end of the church were reordered in 1999. In 2011, the arcades between the chancel and the north aisle were glazed to create an enclosed Lady Chapel. The garden of remembrance was laid out from 1950, with alterations in the early years of the C21.

The parish church of St Barnabas, Tuffley, built in 1938-9 to designs by N F Cachemaille-Day, is listed at Grade II*, for the following principal reasons:
* Architectural interest: the church is a fine design by Nugent Francis Cachemaille-Day, a significant ecclesiastical architect of the inter-war years;
* Innovation: in common with other of Cachemaille-Day’s designs, the church demonstrates the influence of the liturgical movement, with its combination of traditional and modern materials and innovative planning;
* Intactness: the church is almost completely unaltered since its completion in 1940, save for the sensitive glazing in of the arcade between the sanctuary and the Lady Chapel;
* Interior: the church retains its contemporary fixtures and fittings, which are of high quality, and an earlier font.