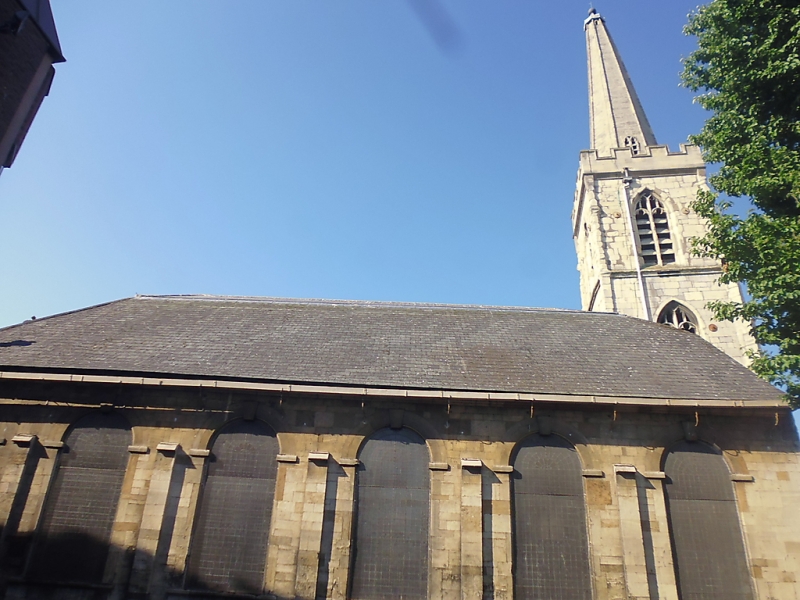 Church. Tower and spire c1450; the body of the church rebuilt
1732-4, designed and built by Edward and Thomas Woodward of
Chipping Campden in a provincial classical style; restored and
altered 1880 and 1882; spire truncated 1910 and the Top of
Spire (qv) rebuilt in former church grave yard, now St Lucy's
Garden, on north side of St John's Lane; east front re-faced
1991 and the roof renewed 1975. Tower and spire of squared
stone partially coursed; the body of the church of ashlar on
brick; slate, hipped mansard roof.
PLAN: simple rectangular plan of nave and aisles of five bays
and a chancel of one-bay flanked by the lobby entry from
Northgate Street on the south side, and a bay housing the
organ on the north side; the tower projects from the west end
on the south side at a slight angle to the axis of the church.
EXTERIOR: at the east end facing Northgate Street a
symmetrical tripartite front with slight central projection
framed by Roman Doric pilasters set on a high podium base with
offset plinth and moulded capping, and supporting entablature
with metopes and crowning pediment; in the centre, above an
applied balustrade with turned half-balusters between blank
panels, a large Venetian window framed by Ionic pilasters with
entablatures above the sidelights, and a moulded arch with a
projecting key stone over the central light, the walls on each
side of the central projection have quoin strips at the outer
angles, cornices at the eaves level of the return side walls,
and parapets, each parapet with an applied blank panel and
capping cornices at the level of the central crowning cornice;
a semicircular arched doorway to the lobby entry on the left
and a matching false doorway on the right, both with moulded
architrave frames, imposts and raised key stones; fielded
eight panel double doors with a glazed fanlight in the arch
above the left- hand doors and fielded panels in the arch
above the right-hand door; above each doorway a large circular
window, both with moulded architrave frames; at the angles of
the crowning pediment and above the quoin strips at the outer
angles stone vases with knopped lids; on the apex of the

pediment a cross.
On both side walls cornices at eaves level and semicircular
arched windows with projecting keystones, the windows enlarged
1882.
West tower of three stages defined by moulded string courses,
with diagonal buttresses with offsets to the lower and middle
stages; C20 crennelated parapet with moulded capping; a
two-light window on each face in the middle stage and similar
belfrey windows in the upper stage, all with Perpendicular
tracery; set on the tower within the parapet an octagonal,
truncated spire with ribbed arrises and two-light lucarnes on
the cardinal faces; at the apex an ogee, lead capping with a
ball finial.
INTERIOR: nave of five bays with colonnades of four Roman
Doric columns without entablatures dividing nave from aisles;
at the west end the C14 respond of the former medieval north
arcade; a plaster barrel vault over the nave and flat plaster
ceilings over the aisles; fielded panel dado of 1734 on the
north, south and west walls.
FITTINGS: include the medieval font retained from the earlier
church but recut, early C18 carved oak reredos, communion
table and rails given to the church in 1734 by Bridget Price,
and part of the original three-decker pulpit from which George
Whitefield and John Wesley preached, pews of 1874 and choir
stalls of 1882, two C18 wrought-iron mace rests.
STAINED GLASS: includes the east window 1880 by Camm Brothers
of Smethwick as a memorial to Robert Raikes and Rev.Thomas
Stock on the centenary of the foundation of the Sunday School
movement in Gloucester.
MONUMENTS: include from the medieval church many floor slabs
and on the north wall of the nave two brasses of figures from
a memorial to John Semys, d.1540 and his two wives; on the
north wall of the chancel a Baroque, gilded monument effigy to
Thomas Price, Master of the Horse to Charles I and twice Mayor
of Gloucester, d.1678, with an upright, upper half effigy; on
the south wall a monument with a small recumbant effigy to his
daughter, Dorothy Price, d.1693, both by Reeve of Gloucester;
on the west wall monuments include several brought from St
Michael's Church, Eastgate Street (qv) when the body of that
church was demolished in 1953, including a cartouche to John
Hyett, Alderman and twice Mayor of Gloucester, d.1711.
This church was formerly the parish church of St John the
Baptist. From 1972 by formal agreement the church shared
between the congregation of the demolished Northgate Methodist
Church and the Church of England.
The east front closely resembles that of St Swithun's
Worcester, another church in classical style by the Woodwards:
their architectural career is cited in Colvin.