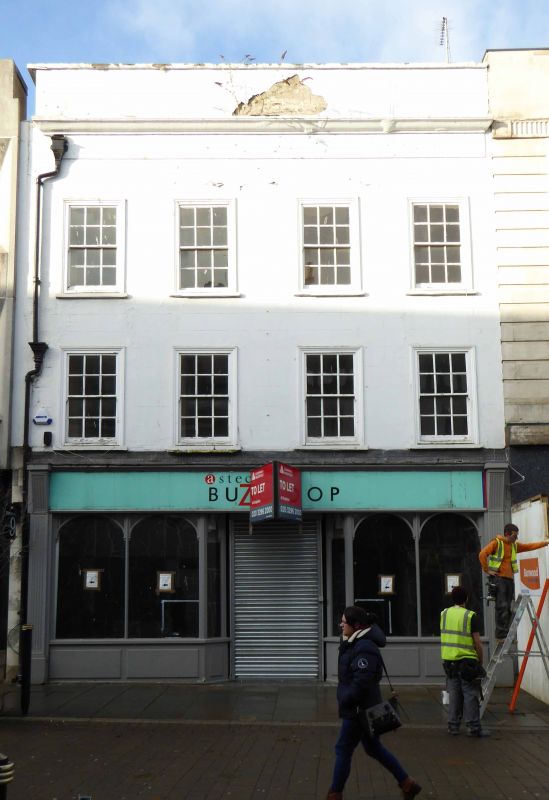 Shop and former dwelling. Originally a merchant's house. C16,
refronted in late C18, C20 alterations. Stuccoed timber frame
and stuccoed brick; slate and corrugated asbestos roofs;
central brick stack reduced to below roof ridges. Double-depth
block with parallel pitched roofs, cross gables at rear.
EXTERIOR: late C18 three-storey refronting to the C16 two
storeys and attic house, cellar below. Late C20 shop-front,
the upper floors of four bays with crowning cornice renewed in
late C20, parapet above; in each bay on the upper floors flush
sashes with glazing bars (3x4 panes) in openings with moulded
architraves and projecting sills, the front is recorded as
originally three bays with dormers. On the rear elevation only
the first and attic floors exposed; small fixed windows
apparently fitted into the pattern of the timber-framing which
is otherwise concealed by stucco; in the centre of the base of
the south gable a grotesque head in relief, possibly C16.
INTERIOR: on the first floor chamfered bridging beams; exposed
timber wall framing in room at rear on the south side; in the
attic the inner slope of the original central bay of the front
pitched roof retains chamfered principal rafters and a
chamfered purlin.