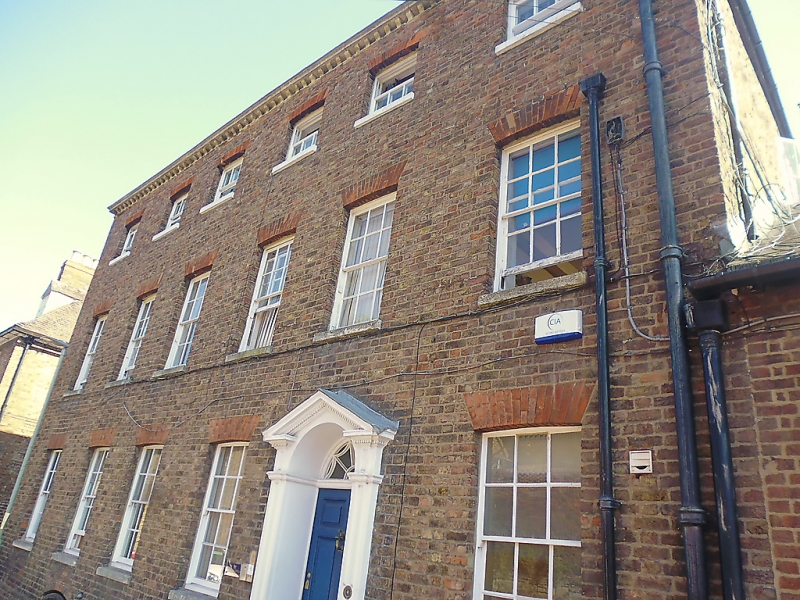 Formerly known as: No.4 Paddock House PITT STREET.
House. Now public school boarding house and adjoining music
school, part of the King's School. c1810. Added east range mid
to late C19. Brick with stone details, hipped slate roof,
brick stacks. Double-depth block with full-height, bow-fronted
wing at rear; adjoining the east side a long, lower range, now
the music school. No.5 Pitt Street (qv) adjoining to left, is
now part of school house.
EXTERIOR: the main block two storeys, cellar and attic, but on
the front the attic behind the third storey and parapet; the
front of six bays with brick, offset plinth, and stone
crowning cornice with close-set modillions and blocking
course; on the ground floor in second bay to left the entrance
doorway, with semicircular arched fanlight with radiating
bars, and fielded six-panel door, the doorway recessed within
opening framed by stone doorcase with panelled pilasters,
panelled dosserets, and open pediment enclosing the top of
arch; in other bays on the ground floor five sashes, and on
the first floor six similar sashes with glazing bars (3x4
panes); on the third (attic) floor six short sashes with
glazing bars (3x2 panes); all the sashes in openings with
rubbed brick, flat-arched heads and projecting stone sills.
At rear is bow-fronted end of wing of two storeys, with stone
string courses at first level and below brick parapet; on each
floor in the bow three tall sashes with glazing bars (3x5
panes) in openings with flat-arched heads of five
raised-and-stepped stone voussoirs and projecting stone sills;
set back to right of wing a hipped projection of two storeys,
in its end wall on the first floor a pair of casements with
glazing bars and on the attic floor a pair of small casements.
The mid C19 lateral range to right of main block, now the
music school, of one storey with front of seven bays; on the
front in left-hand bay a doorway with rectangular fanlight,
and in bays to right six sashes with glazing bars (3x4 panes);
at rear at right-hand end right a wing with polygonal end, and
sashes with details similar to front.
INTERIOR: the main block contains entrance hall with arched
doorway leading into a large, central stair well with domed
skylight above an open-well staircase with open string, shaped
tread-end brackets, stick balusters and swept handrail;