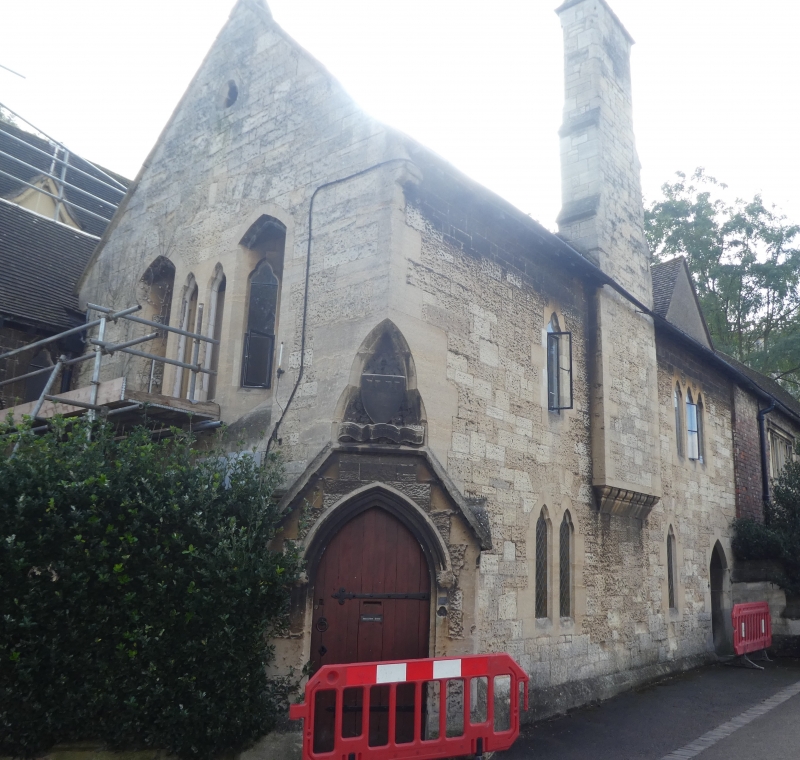 Infirmary's Lodging, now independent school house, part of the
King's School. The core of the house probably the Infirmarer's
Lodging attached to the Infirmary of the Benedictine Abbey of
St Peter, with some remains of the infirmary chapel of St
Bridget; after 1540 remodelled and enlarged as the cathedral's
prebendal house assigned to the prebendary of the third stall.
C13 and late C14 with C17 and C18 additions and alterations,
substantially remodelled in C19 (mainly c1860's). Rubble with
ashlar details, timber-framing, brick, render, tiled roofs
with coped gables, hipped dormers, ashlar stacks.
PLAN: a complex development of ranges enclosing a small court
or light well; the monastic structure, mostly encapsulated
within later walls, is principally a late C14 range of three
bays aligned north to south on the east side; wings added in
C17 on the south side at the west end and on the east side at
the south end; another C19 wing added to south side of the
east wing; the west and north sides extensively remodelled in
C19.
EXTERIOR: two storeys, cellar and attic; the north end wall of
squared rubble with a large gable to left and smaller and
lower gable to right; at the north-west corner the C19 arched
entrance doorway is angled below moulded corbelling which
supports the corner above.
In the north gable-end wall, in the north end of the west wall
on both floors and in the gables irregular fenestration of
single, double and triple-light stone-framed casement windows
with a trefoil head to each light.
On the west side further to right the west end of the south
range is indicated by a length of wall in brick, with an early
C17 four-light stone-framed and mullioned casement with eared
hoodmould on each floor; at right-hand end the side of the
west gabled wing on the south side is of rubble on the ground
floor and rendered above; the gabled end of the wing is of
ashlar with a three-light stone-framed and mullioned casement
with hoodmould on each floor and an exposed roof tie-beam in
the gable, on the east side of the wing a tall ashlar stack.
On the south side between the wings irregular fenestration

including two C19 sashes with central vertical glazing bars.
On the east side the cross-gabled wing at the left hand end of
the east range; the front of the east range on the ground
floor supports three tall stacks, on the ground floor a
central doorway of c1600 with chamfered jambs and a
vertical-plank, iron studded door, a sash to left with glazing
bars (2x4 panes) and to right a stone-framed and mullion
two-light casement; on the first floor three C19 stone-framed,
mullion and upper transom, two-light casements, to the attic
three hipped roof dormers each with a pair of casements; on
the wing to left a sundial and two scratched dates 1726 and
1743.
INTERIOR: originally the ground floor of the east range was
the timber-framed undercroft to a first floor hall with an
open timber roof; within the former undercroft a central,
lateral row of chamfered oak posts set on moulded stone bases,
the chamfers stopped under miniature, trefoiled arches carved
in the solid; at the heads of the posts solid oak brackets are
each carved with a figure, probably a monk; posts and brackets
support a massive lateral oak beam under the floor of the
former hall.
On the west side of the range a late C13 stone doorway with a
Caernarvon arch lintel; the upper floor of the range
originally open into the roof, but an attic floor and
partitions inserted later; the roof now partly exposed in the
attic has trusses with moulded arched braces to the collar
ties and slightly curved wind braces to the purlins; in the
light well the west wall is timber-framed; on the first floor
a room with panelling of c1600 with carved frieze panels reset
above the fireplace. In the cellar at the north end of the
west range a masonry wall at the north end probably the
remains of the south wall of the Infirmary Chapel. A house of
great archaeological interest.
(Eward S: No Fine but a Glass of Wine: Salisbury: 1985-; BOE:
Verey D: Gloucestershire: The Vale and the Forest of Dean:
London: 1976-: 226; Welander D: The History, Art and
Architecture of Gloucester Cathedral: Stroud, Gloucestershire:
1991-).