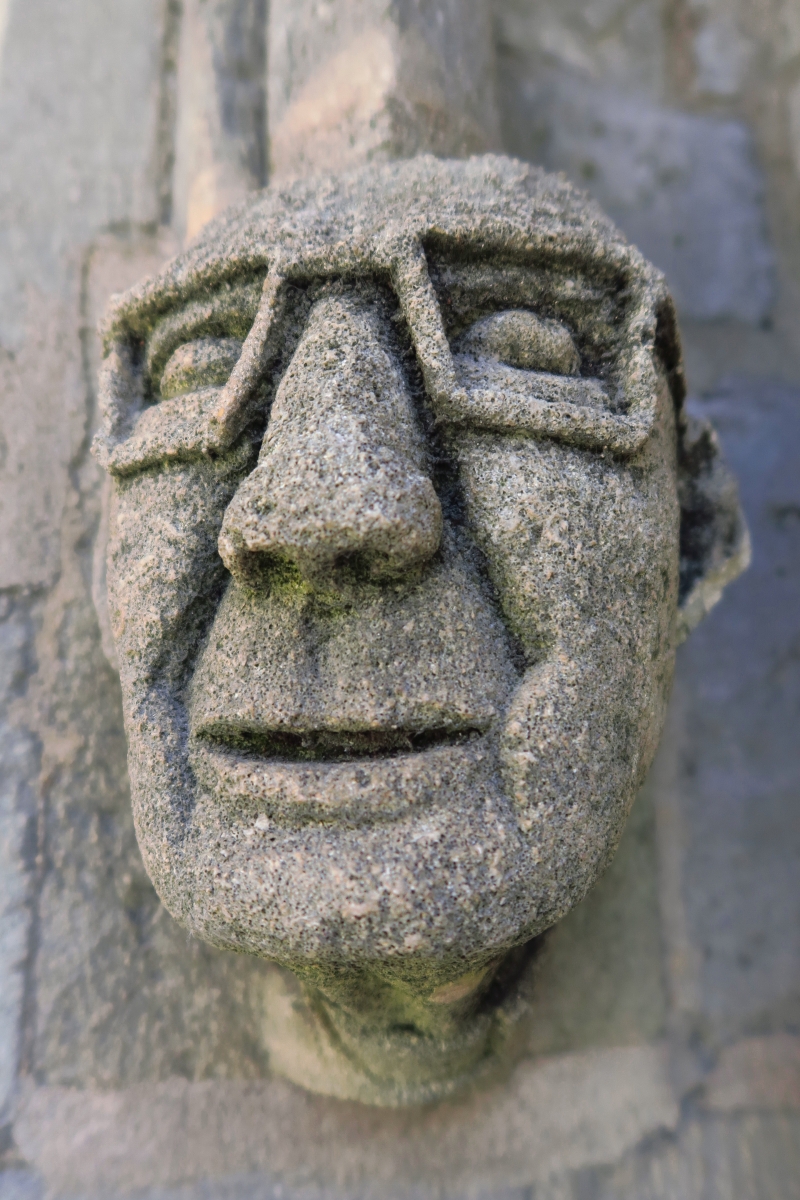 Roman Catholic church. 1860-8. By Robert Gilbert Blount, on
site of earlier chapel, for the parish priest, Canon
Calderbank. Dressed stone in courses with ashlar details,
slate roof. Decorated Gothic Style. Church not orientated, the
ritual east end to the north; nave with aisles, chancel with
side chapels; a tall tower and spire at the south-east corner
with entrance lobby through the base of the tower.
EXTERIOR: plinth with moulded offsets to all parts of the
church, at the west end the tower of five stages has angle
buttresses with offsets at each stage, doorway to lobby on the
west side of the bottom stage has richly moulded jambs and
arch, in the second stage a pair of lancet windows in the west
and north faces with a tracery trefoil in the head of each
window, between the windows on both faces an elaborately
carved corbel supports a shaft with a foliated capital which
in the third stage forms the base of a niche with a nodding
ogee-arched head below a crocketed gablet; a clock face in the
forth stage on the west side in a moulded stone frame; the
upper stage is an open arcaded belfry with a pair of arched
openings on each side, the moulded arches are supported on
circular columns with foliated capitals, above the crowning
corbel table a broach spire with two-light lucarnes in each
cardinal face of the spire.
Gabled front to the nave with a buttress with offsets at the
south-west corner, three lancet windows with hoodmoulds above
which are two canopied niches containing the statues of saints
supported on corbels carved with the busts of angels, above a
string course the gable has a large rose window with foiled
geometrical tracery and a vesica light in the apex. Gabled end
to the south aisle with a two light traceried window. The
chancel has gablets above the clerestory windows.
INTERIOR: four-bay nave arcades with clerestory windows placed
above the piers, timber arch braced roof, the gallery at the
west end is supported on a three-bay arcade with marble
columns on stone bases and has a parapet pierced with
quatrefoils; chancel arch is supported on short marble shafts
set on carved corbels; three-bay chancel, the arcades with
marble columns and boldly carved and gilded foliage capitals,
panelled timber vault with cross vaults to the three-light
clerestory windows; south chapel has a timber double pitched

panelled ceiling and the north chapel a similar segmental
ceiling.
FITTINGS: include an elaborately carved and arcaded pulpit and
richly carved and painted reredos at the east end of the
chancel. Lady Chapel and Sanctuary painting by Clayton and
Bell, later modified by Linthont of Bruges in 1979.
STAINED GLASS: by Clayton and Bell.
HISTORY: the building of the church was funded by
subscriptions from the parishioners with a gift of 1,000 from
Frances Canning.
A distinctive composition in Gothic Revival style, one of the
most notable of Blount's commissions and dating from the
middle part of his career.
(BOE: Verey D: Gloucestershire: The Vale and the Forest of
Dean: London: 1976-: 243).