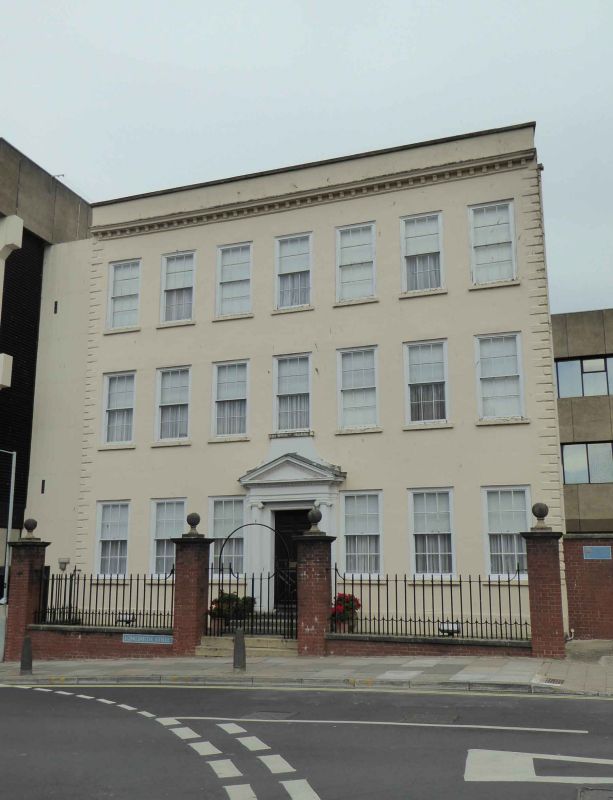 Town house, now offices. Built c1704 for Edward Wagstaffe,
remodelled 1740-43 for Henry Guise, later C18 alterations,
restored late C20. Stuccoed brick, stone details, slate roof.
Double-depth block behind shallow forecourt; wide central hall
with stair well at rear, and on the first floor above the hall
a cross-gallery, later subdivided.
EXTERIOR: three storeys and cellar. Symmetrical front of seven
bays with offset plinth, raised and chamfered quoins at the
corners of the front and crowning modillion cornice with stone
capped parapet above; the entrance doorway in the central bay
is framed by three-quarter Ionic columns supporting an
entablature and pediment; the door with a lower cross-braced
panel and four fielded panels above; on each-floor sashes of
similar size with renewed glazing bars (3x4 panes) in plain
openings with projecting sills. Kip's view of Gloucester,
c1712, shows the front with a crowning central pediment: the
existing doorcase and crowning pediment are mid to late C18
alterations.
Rear elevation has raised bands at first and second-floor
levels, irregular fenestration of sashes with glazing bars
(mostly 3x4 panes) and, lighting the stairwell, at low level a
semicircular arched sash, and at higher level a larger,
semicircular arched sash, both with glazing bars.
INTERIOR: contains mid C18 features of exceptional quality;
entrance hall has decorative stone paving, fielded dado
panelling with full height fielded panels above, and fielded
panel doors; at rear of hall open well staircase with bottom
curtail step and quarter landings rising to first and second
floors has open strings with richly carved tread-end brackets,
panelled risers, twisted column-on-vase balusters, two to each
tread and four close-set balusters on a common base in lieu of
newels, ramped handrail swept around the bottom curtail step
and a raised and fielded stair dado.
Other principal rooms have panelling similar to the hall.
Richly moulded plasterwork in rococo style of 1740-43 to the
hall ceiling, above the stairwell, on the soffits of the
flights of the staircase, and in many of the principal rooms,
with modillion cornices and elaborately moulded panels
incorporating the swan crest of the Guise family; the ceiling

over the stair well modelled in high relief with the figure of
Jupiter sitting on clouds with an eagle, other ceilings
incorporate heads in roundels. In one room a carved stone
chimney-piece with a niche above. A large brick vaulted
cellar. Of principal note for the outstanding quality of the
1740s plasterwork.
HISTORY: from 1732 to 1757 the house was sub-let to Robert
Raikes senior except for 1740 to 1743, when it was leased to
Henry Guise of Elmore. From 1757 to 1772 it was leased to
Robert Raikes junior.