Bearland House and Attached Railings and Gates to Forecourt 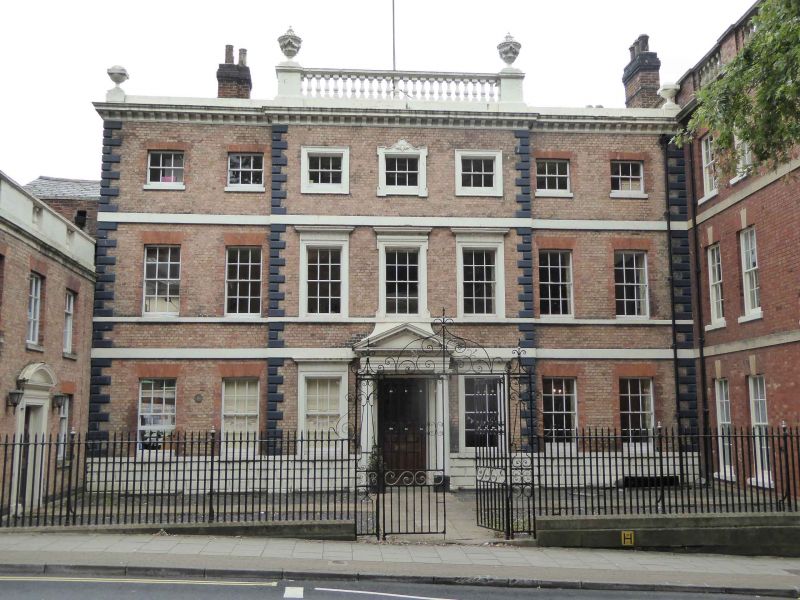 Formerly known as: Bearland LONGSMITH STREET.
Town house, now offices. c1735-1740, and either a rebuilding
or an extensive remodelling and enlargement of a late C17 or
earlier C18 house; the wings flanking the forecourt added
c1750 but the west wing demolished c1912 and replaced by a
fire station, now a transport museum (not included). Built for
William Jones, a prominent Gloucester attorney and his mother,
who occupied part as a separate dwelling. Minor late C18 and
C19 alterations; extensive restoration and some alterations,
1980, for and by Preece Payne Partnership, architects, for
conversion to professional offices.
MATERIALS: brick with stone details, rendered brick at rear,
slate roof, brick stacks.
PLAN: double-depth block with lower wing on north side of
entrance forecourt; in the main block a wide central hall with
the principal staircase at the far end rising to the former
cross gallery on the first floor, now subdivided.
EXTERIOR OF MAIN BLOCK (No.59): three storeys and cellar.
Symmetrical front of seven bays with a slight projection to
the three central bays (2+3+2); on the ground floor a
projecting porch in the central bay, to either side a
rusticated stone dado of chamfered ashlars on an offset plinth
with a capping linking the ground-floor window sills, stone
bands at first and second-floor levels, and a slighter
first-floor sill band, stone crowning modillion cornice with
blocking course; above the three central bays a balustrade
parapet with turned balusters between square terminal piers
surmounted by large, richly carved urns; smaller carved urns
above the outer corners of the front; raised and chamfered
stone quoins painted black at the angles of the central
projection and at the outer corners.
The projecting stone porch in the central bay has a pair of
Roman Ionic columns supporting entablature with pulvinated
frieze and a pediment. Doorway is flanked by Ionic pilasters;
eight panel door with alternating pairs of large and small

fielded panels.
In the central bays to either side of porch and on the first
and second floors, sashes in openings with moulded stone
architraves with full entablatures above the ground and first
floor openings; the architrave to the central opening on the
first floor is eared and shouldered, the architrave to the
central opening on the second floor is eared at all corners
and raised at the top with decorative carving; in the side
bays all the openings have contrasting red brick quoins,
rubbed brick flat arched heads and projecting stone sills. All
sashes have glazing bars on the ground and first floors (3x4
panes) and in the short sashes on the second floor (3x2
panes); many contain C18 glass.
The rear of the main block is rendered except for the early
C19 two-storey canted bay in painted brick to the left with
stone bands at the floor, window sill and parapet levels; a
horned sash with a central glazing bar to each face of the bay
on both floors. To the right of the bay, a large sash with
glazing bars in opening with a segmental brick arched head
lighting the stairwell. Wall to right largely rebuilt in C20
with sashes to match originals.
INTERIOR OF MAIN BLOCK: entrance hall with raised fielded dado
panelling and full height fielded panelling above; raised
fielded panel doors in doorways with moulded architraves;
transverse moulded timber basket arch supported on moulded
pilasters, the spandrels infilled with richly carved and
pierced acanthus panels. Open-well staircase with half landing
rising to first floor; open strings with a small fielded panel
above a richly carved end bracket below each tread end and the
soffit of the upper flight moulded to the profile of the end
brackets; the balustrade swept around the bottom curtail step;
four twisted column-on-vase balusters in lieu of newels at
bottom step and at end of balustrade on the first-floor
landing, otherwise three column-on-vase newels balusters to
each tread and a ramped handrail; raised fielded stair well
dado. Arched window to stair landing has panelled reveals
flanked by pilasters. Moulded plaster ceilings and enriched
dentil cornices in the hall and over the stair well.
On the first floor at the centre of the former cross gallery a
transverse moulded timber basket arch supported on moulded
pilasters is infilled with a later panelled screen. Large room
to rear right with canted bay on the first floor has early to
mid C19 details and a moulded marble chimney piece. Other
rooms retain early C18 panelling and moulded cornices; several
rooms have C18 chimney pieces. Extensive brick cellars vaulted
in part.
EXTERIOR OF WING (No.57): two storeys; symmetrical front to
forecourt, three bays with a simple, moulded stone crowning

cornice with parapet above pierced by an open balustrade panel
above each bay; central doorway with a moulded stone
architrave crowned by entablature with pulvinated frieze and a
segmental pediment. On both floors sashes with glazing bars
(3x3 panes) in openings with red brick flat arches and
projecting stone sills.
INTERIOR OF WING: remodelled in late C20.
SUBSIDIARY FEATURES: Fronting the forecourt a restored C18
wrought-iron railing with central double gates framed by
decorative flanking panels and an overthrow.
(BOE: Verey D: Gloucestershire: The Vale and the Forest of
Dean: London: 1970-1980: 252).