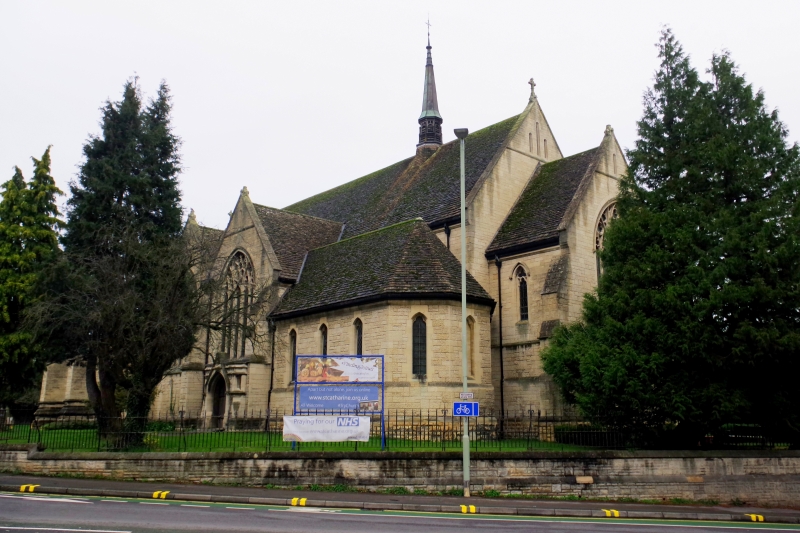 Anglican church, built between 1912 and 1915. Designed by Walter B Wood for the Gloucester Church Extension Society in the Free C14 Gothic style, and built by James Byard & Sons. C20 and C21 alterations.

Anglican church, built between 1912 and 1915. Designed by Walter B Wood for the Gloucester Church Extension Society in the Free C14 Gothic style, and built by James Byard & Sons. C20 and C21 alterations.

MATERIALS: the church is built of snecked, vermiculated stone with ashlar dressings. The roof is covered in stone slates.

PLAN: orientated approximately west to east, it consists of a four-bay nave with a north and south arcade and aisles and a narthex. Towards the east end of each aisle is a porch. To the east end is a two-bay chancel and single-bay sanctuary. The Lady Chapel is to the south of the chancel, with a polygonal apse at its east end; and the vestry rooms are to the north of the chancel with the organ loft above. To the south-west corner is the base of the intended tower.

EXTERIOR: at the west end of the church is the projecting, gable-ended narthex with a moulded-arched doorway with foliate decoration to the soffits and hoodmould stops. There is a carved stone above the arch with foliate decoration with an octagonal stone cap, and a panelled and coped gable above. The vestry bays to either side of the entrance are canted with two-light stone mullion windows. Above the porch, the west end of the nave has a large Decorated-style, pointed arch window beneath a hoodmould with foliate stops. The tri-partite window is sub-divided by inset buttresses, and arranged as two-, three- and two-light pointed arch windows. In the gable are three narrow roof vents with cusped heads. The nave is flanked by the lean-to, western ends, of the aisles, with a three-light, pointed arch window to the end of the north aisle and a two-light, pointed arch window to the end of the south aisle. To the west and south elevations of the south aisle are the lead-capped buttresses of the proposed south-west tower which was never completed. The two-left hand bays of the south aisle include a rectangular two-light, stone mullion window to the left and a four-light window to the right with a four-centred arched head and hoodmould with headstops. The two, gable-ended transept bays have five-light, Decorated-style pointed arch windows with wheel tracery to the apex; set beneath hoodmoulds with foliate stops. Beneath the window to the right-hand bay is the south porch, which replicates the style of the west porch but on a smaller scale and with simpler decoration. At the right-hand end of the south elevation are the three single-light windows with cusped heads to the Lady Chapel. The polygonal apse of the Lady Chapel has a single-light window with cusped head to each of the three sides; the central window is blind. The gabled east end of the sanctuary has a central six-light Decorated window within a pointed arch; the hoodmould has foliate stops. To the gable is a single roof vent. The side elevations of the sanctuary each have a single-light, pointed arch window with a trefoil to the apex and a hoodmould with headstops. The gable of the chancel behind the sanctuary has three roof vents, and at the east end of the roof between the nave and chancel is a timber fleche with copper roof. Set-back to the right of the sanctuary is the east end of the vestry with the organ loft above. The projecting vestry is canted to the north-east corner and has a crowning cornice with stone parapet. Above is the east end of the organ loft with two, single-light windows with cusped heads and a single roof vent to the gable. At the right-hand end of the north elevation are stone steps to the pointed-arch vestry doorway. The timber-plank door has decorative iron fittings. To the right of the door are two, three-light chamfered stone mullion windows. A stone plat band, with relieving arches above the windows, divides the vestry from the organ loft above, which has three, single-light windows with cusped heads. To the right are the two transeptal bays of the south aisle and the south porch, which are of the same style as those to the north elevation. The two-bay, western end of the north aisle has two, two-light, pointed arch windows to the left-hand bay, and a two-light, pointed arch window to the right-hand bay. Rising from the buttress between the two bays is an octagonal stone pier with stone cap.

INTERIOR: the narthex leads to an inserted ground-floor room which occupies the space between the westernmost arch of the north and south arcades. To the south-west corner a meeting room has been inserted, accessed by a timber staircase at the west end of the south aisle. There is no structural division between the nave and the chancel which have a continuous barrel-vaulted roof. The nave arcades have chamfered pointed arches supported on triangular piers with shafts to the corners with annular rings. The piers are set on moulded triangular bases with chamfered corners. There are transverse arches to the aisles which have two, cross-gabled transeptal bays at the eastern end. To either side of the chancel is a two-tier arcade with corbelled shafts and pairs of pointed arch openings to each tier. The openings to the upper tier have nook shafts and hoodmoulds with foliate stops. On the north side of the upper tier, the organ pipes occupy the left-hand arch, whilst the right-hand arch is open. The upper arcade to the south side forms a pair of clerestorey windows which are blind to the lower section. The sanctuary arch is supported on corbelled cluster shafts. To the north wall of the sanctuary is the aumbry; the piscina and sedilia are to the south wall.

FIXTURES AND FITTINGS: the square font of 1868 by M H Medland has relief carvings of baptism scenes to the sides and was introduced from the previous Church of St Catherine on Priory Road. The font cover was carved by parishioner Mr James, and given to the church in 1916. The clergy stalls and choir stalls were designed by the architect Walter B Wood, made by James Byard & Sons and carved by A P Frith. The intricately carved and panelled pulpit with canopy, along with the lectern and the linen-fold panelled screen to the chancel were designed by Rosier and Whitstone of Cheltenham, and executed by R L Boulton & Sons of Cheltenham, 1926. R L Boulton & Sons also carried out the work for the carved, painted and gilded reredos, 1937; the Gothic oak screen to the Lady Chapel, 1940-8, and the altar rails, which were all designed by W E Ellery Anderson. The organ was provided by the Goddard family. There are two war memorial plaques to the south wall of the Lady Chapel. The encaustic tiled floor to the sanctuary and chancel is by Godwins of Lugwardine.

STAINED GLASS: the east window is by Jones and Willis, 1914. The two stained glass windows in the apse of the Lady Chapel are by Clayton and Bell, 1868, and were introduced from the previous Church of St Catherine, Priory Road. The south aisle window is by Percy C Bacon, 1921.

St Catharine’s Church was built between 1912 and 1915 and designed by the Gloucester-based architect Walter B Wood (1852–1926) for the Gloucester Church Extension Society and built by Gloucester firm James Byard & Sons.

The original St Catherine’s (the present spelling was not adopted until 1886 when the name of the parish was changed from St Catherine to St Catharine) was established after the Dissolution of St Oswald’s Priory in 1538, when the majority of the priory was demolished. The remaining north arcade was filled in and the north aisle became the Church of St Catherine. The church was badly damaged during the Siege of Gloucester in the Civil War in 1643, and was subsequently demolished in 1656. For the next two centuries the parish did not have a church. In 1866, the churchwardens wrote to the Chancellor of the Diocese, Mr C J Monk, who was also a Member of Parliament, urging the rebuilding of a church in the parish. Mr Monk made a subscription of £500 to the cost of the building stipulating that the new church be built on the same site as the former building on Priory Road. The new Church of St Catherine was consecrated in 1868. In 1906, the Bishop of Gloucester convened a commission to examine parish boundaries and the disposition of churches in the City deanery. There was a pressing need for a church in the Wotton district and the Church of St Catharine was identified for relocation. The site chosen for the new church was at the junction of London Road (formerly Ermin Street), Denmark Road (formerly Gallows Lane) and Cheltenham Road. This position was at the geographical centre of the parish.
The new church was built at a cost of approximately £15,000, a sum which was met by grants and voluntary contributions. The original design included a south-west tower and spire which although started, was never completed due to a lack of funds. The foundation stone was laid by the Freemasons of Gloucestershire on the 28 May 1912, and the church was consecrated on the 21 June 1915 by the Bishop of Gloucester. The following day the former church was closed and was demolished in 1921.

During the 1960s the altar rails and the windows to the south side of the Lady Chapel were inserted. In 1990 a single-storey room was created at the west end, and the font was relocated to the north aisle. An additional meeting room has since been created at the west end of the south aisle, accessible via an inserted timber staircase. The original seating to the nave and aisles has been removed.

The Church of St Catharine, designed by the architect Walter B Wood and built between 1912 and 1915, is listed at Grade II for the following principal reasons:
* Architectural interest: the overall massing of the church is well-handled giving it an interesting horizontal emphasis achieved by the broad nave and wide aisles;
* Intactness: externally the church is unaltered and the interior survives well retaining its good quality finishes and a number of fixtures and fittings of note;
* Artistic interest: the contemporary clergy and choir stalls designed by the architect, and the high-quality fittings of the mid-C20 fittings, including the pulpit and reredos, executed by the notable firm R L Boulton & Sons of Cheltenham;
* Group value: forms a contemporary group with the associated gates and railings (Grade II).