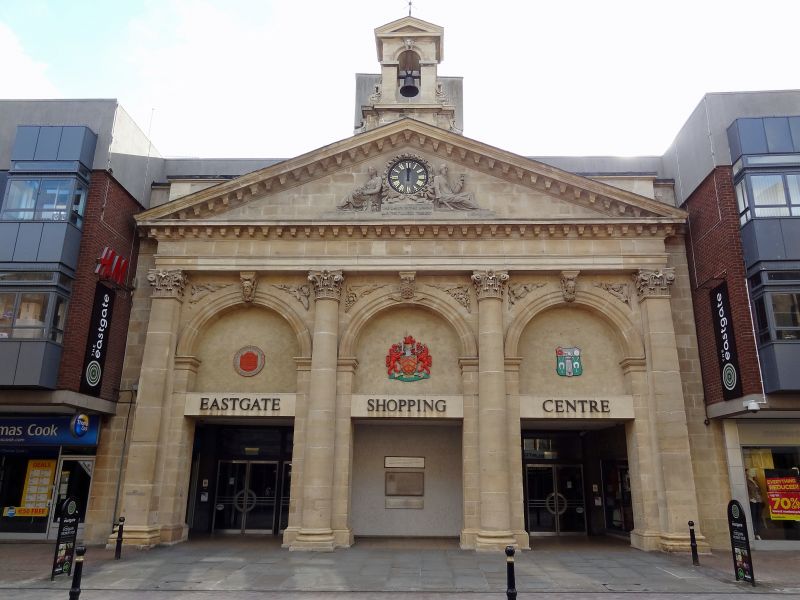 Originally an entrance to the former Eastgate Market. 1856. By
Medland and Maberly. Removed and rebuilt on present site as an
entrance to Eastgate Shopping Mall (not included), 1988.
Ashlar. Monumental Italianate style.
EXTERIOR: a tall, three-bay arcade framed by a Corinthian
order of half columns applied to the two central piers, and
pilasters applied to the end piers, all on pedestals; the
entablature with modillion cornice and a crowning pediment,
with modillion eaves set against and rising above a parapet;
above and behind the apex of the pediment a tall plinth
flanked by consoles supports an inset, open, arched bell
turret also flanked by scrolls at the base, and crowned by a
pediment. The bays of the arcade have moulded imposts to the
piers and semicircular arches with moulded archivolts,
enriched keystones and carved spandrels; in the tympanum of
the pediment a central circular moulded frame for a clock is
supported by adorsed seated figures sculpted in high relief:
Father Time on the right and Ceres on the left; at the feet of
both figures realistically carved market produce.
The former carved urns on the outer corners of the parapet and
the pairs of wrought-iron gates in each bay of the arcade were
not replaced when portico rebuilt on present site.