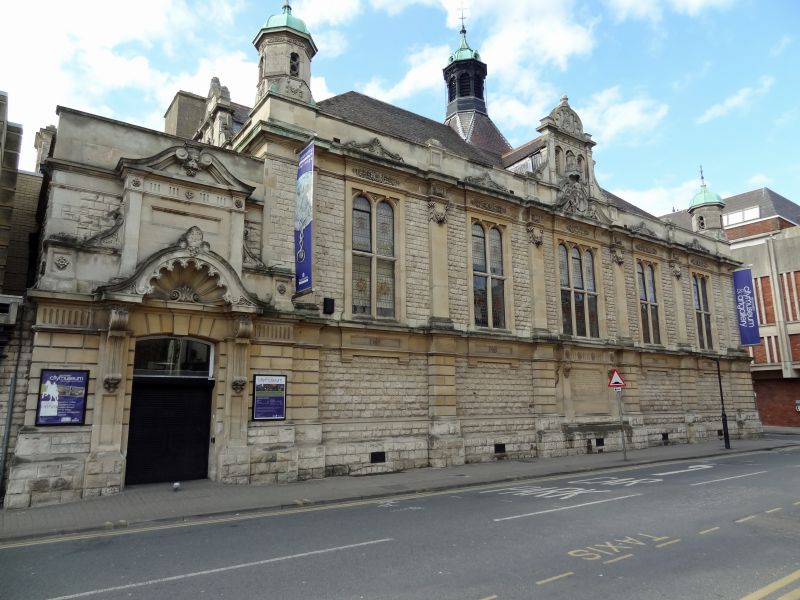 Museum and art gallery. 1898. By FS Waller for Margaret Hall
as a memorial to her husband William Edwin Price; extended to
the rear by the same architect. Coursed, rock-faced rubble
with ashlar features and details, red plain tile roof
surmounted by a timber cupola with a copper dome. Designed in
an eclectic early Renaissance style inspired by the work of TG
Jackson. A large, rectangular, block with entrance hall wing
at south end.
EXTERIOR: 2 storeys and cellars; on the main block the ground
floor has no fenestration and forms a tall podium to the upper
floor; the front of the main block is symmetrical, with five
bays defined by piers at ground-floor level and pilasters at
first-floor level, with wider clasping piers and pilasters at
each corner
Above the central bay an ashlar fronted dormer, an octagonal
cupola above the parapet at the outer corners, and a larger,
central cupola on the roof ridge; on the ground floor a tall
rock faced plinth with two offsets both capped by a chamfered
ashlar course; below the first-floor sill level a corniced
ashlar band incorporating an apron panel below the large
three-light ashlar framed and mullioned leaded window in the
central bay and the similar two-light windows in the other
bays, all the windows have central transoms and semicircular
arched heads with key stones to the upper lights; above is a
crowning, ashlar entablature which breaks forward slightly
over each window with a carved panel in the frieze; above the
cornice of each projection an anthemion with flanking scrolls
carved in relief against the parapet except for the central
bay which has a blank heraldic shield with dragon crest in
relief against the front of the dormer under an arched canopy.
On the left side of the main block the lower, slightly
recessed bay with an elaborate, applied frontispiece in two
stages; the rusticated lower stage is crowned by the
continuation of the corniced band on the main block to each
side of the entrance doorway which is framed by pilasters with
moulded corbels supporting a shell hood with a scalloped edge;
the hood projects in front of the central panel on the upper
stage, the panel is framed by pilasters and entablature with a
swan-neck pediment above and parapets on each side supporting
scrolls against the sides of the panel; the wide double

doorway has rusticated jambs and a cambered arched head with a
projecting keystone.
INTERIOR: original features include joinery and staircase.
Original staircase of 1898. The most important internal
feature of 1892-3 is the main ceiling at eaves level, coved
and offered with three sun-burner centrepieces. The interior
also includes part of the scheduled Roman colonia wall. Main
staircase of 1957 by RD Fitzsimmons, when first floor built.
HISTORY: originally the Price Memorial Hall built as a lecture
hall for the Gloucester Science and Art Society, 1892-3. In
1902 adapted for use as a museum and art gallery for the
Corporation of the City of Gloucester.
(BOE: Verey D: Gloucestershire: The Vale and the Forest of
Dean: London: 1976-: 240; VCH: The City of Gloucester: Oxford:
1988-).