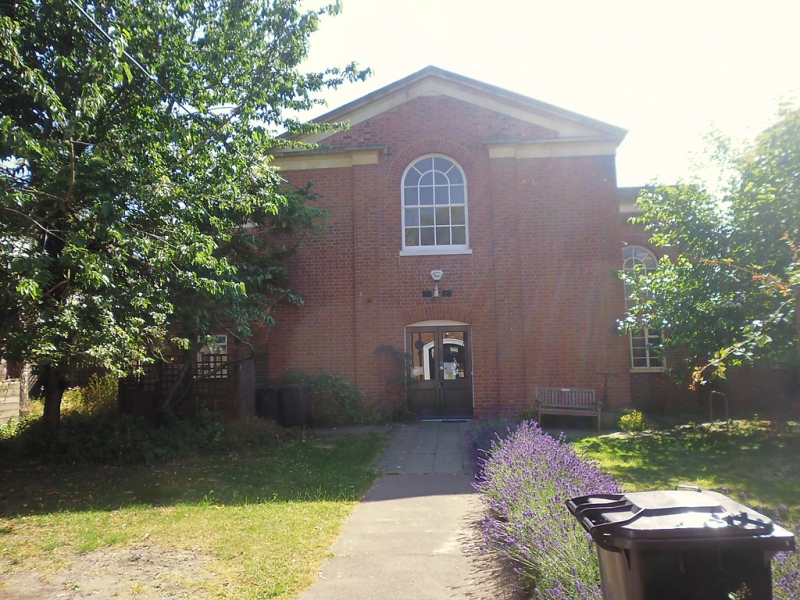 Quaker Meeting House built in 1834-1835 to designs by Samuel Whitfield Daukes with a later two-storey entrance lobby added in 1879 and further single-storey additions in 1946.

Quaker Meeting House built in 1834-1835 to designs by Samuel Whitfield Daukes with a later two-storey entrance lobby added in 1879 and further single-storey additions in 1946.

MATERIALS: both the original building and the 1879 addition are of red brick laid in Flemish bond with stone dressings and slate roofs.

PLAN: rectangular plan with entrance hall projecting out on the north-east side.

The projecting two-storey entrance lobby of 1879 has a central door with brick cambered arch and a round-arched window above, framed by a giant order of brick pilasters rising to meet an open pediment.

Three 1946 low flat-roofed brick-built additions are on either side of the entrance lobby and against the western flank wall.

INTERIOR: the two meeting rooms are each lit by high level windows front and back (two in the main meeting room and one in the smaller room blocked by the 1879 addition). Each room has plastered walls and flat plastered ceilings with moulded cornices and a central rose/ ventilator. Covered wooden ventilators are also set into the walls. Between the two spaces, vertical sliding deal panelling occupies the full height within arched openings, the central one wider and with a depressed arch and containing shutters which slide down as well as up, the outer ones round-arched, slightly lower, and incorporating communicating doors. At the east end of the main meeting room is an unusually high stand, with panelled front and dado, the five steps up on either side flanked by moulded handrails, turned newels and stick balusters. The handrail continues along the front of the stand, supported by stubby wooden piers. The floor is timber boarded, with full length metal heating grilles set into it on either side. The high dado panelling and fixed seating continue around the north and south sides, and around two sides of the smaller meeting room, here interrupted on the west side by doors to the 1946 addition and a central arched and plastered fireplace, flush with the wall.

The 1879 entrance hall has an encaustic tile floor, with a stair to the upstairs classroom on the left, and a small committee room to the right.

Quaker meeting houses are generally characterised by simplicity of design, both externally and internally, reflecting the form of worship they were designed to accommodate. The earliest purpose-built meeting houses were built by local craftsmen following regional traditions and were on a domestic scale, frequently resembling vernacular houses; at the same time, a number of older buildings were converted to Quaker use. From the first, most meeting houses shared certain characteristics, containing a well-lit meeting hall with a simple arrangement of seating. In time a raised stand became common behind the bench for the Elders, so that traveling ministers could be better heard. Where possible, a meeting house would provide separate accommodation for the women’s business meetings, and early meeting houses may retain a timber screen, allowing the separation (and combination) of spaces for business and worship. In general, the meeting house will have little or no decoration or enrichment, with joinery frequently left unpainted.

Throughout the C18 and early C19 many new meeting houses were built, or earlier buildings remodelled, with ‘polite’, Classically-informed designs appearing, reflecting architectural trends more widely. However, the buildings were generally of modest size and with minimal ornament, although examples in urban settings tended to be more architecturally ambitious. After 1800, it became more common for meeting houses to be designed by an architect or surveyor. The Victorian and Edwardian periods saw greater stylistic eclecticism, though the Gothic Revival associated with the Established Church was not embraced; on the other hand, Arts and Crafts principles had much in common with those of the Quakers, and a number of meeting houses show the influence of that movement.

The C20 saw changes in the way meeting houses were used which influenced their design and layout. In 1896 it was decided to unite men’s and women’s business, so separate rooms were no longer needed, whilst from the mid-1920s ministers were not recorded, and consequently stands were rarely provided in new buildings. Seating was therefore rearranged without reference to the stand, with moveable chairs set in concentric circles becoming the norm in smaller meeting houses. By the interwar years, there was a shift towards more flexible internal planning, together with the provision of additional rooms for purposes other than worship, reflecting the meeting house’s community role – the need for greater contact with other Christians and a more active contribution within the wider world had been an increasing concern since the 1890s. Traditional styles continued to be favoured, from grander Classical buildings in urban centres to local examples in domestic neo-Georgian. The work of the prolific Hubert Lidbetter, longtime Surveyor to the Six Weeks Meeting, demonstrates a range from the solid Classicism of Friends House, London (1924-1927) to the more contemporary style of the Sheffield meeting house of 1964 (now in alternative use). In the post-war period, a small number of Quaker buildings in more emphatically modern styles were built; examples include the meeting house at Heswall, Merseyside, 1963 by Beech and Thomas, and buildings by Trevor Dannatt, of which the Blackheath Quaker Meeting House is one.

George Fox visited Gloucester Quakers in 1660 when meetings for worship took place in the houses of Friends. In 1678 two cottages in Back Hare Lane (now Park Street) were acquired and combined to form a meeting house. This remained in use until 1834 and were superseded by the present meeting house. The building survived until 1903, when it was replaced by the present Park Street Mission Room. The Park Street Mission was laid down as a Church in October 2018 and the building sold in 2019.
The present Gloucester Quaker meeting house was built in 1834-1835 from designs by Samuel Whitfield Daukes (or Dawkes) (1811-1880), a Gloucester architect. An entrance lodge or gatehouse on the street frontage built at the same time was also presumably Daukes’ design (Grade II). Between the two buildings a burial ground was laid out.

As originally designed, the meeting house consisted of two rooms with a small single-storey entrance lobby. The latter was demolished in 1879 when a two-storey addition was built onto the front to provide a larger entrance area with a committee room to one side and a large classroom above. The gatehouse was altered and extended at the same time. James Philip Moore (1872-1902) was the architect; he continued the practice established by Daukes.

In 1946, low flat-roofed additions were built on either side of the lobby and against the western flank wall, providing improved facilities. Substantial repairs were undertaken in 1974 (including underpinning at one corner) and 1987-1988. In 2012 the building was subject to an arson attack resulting in mainly smoke damage. It was repaired and reopened in 2013. The entrance doors had to be replaced.

The burial ground contains burials spanning the period 1837 to 1876. The headstones lie flat, and most have been gathered together in a corner although one is still set into the grass.

Daukes was architect of several railway buildings and churches as well as Hitchin and Staines Quaker Meeting Houses but is probably best known for his remodelling of Witley Court, Worcestershire in 1860. He has nearly 60 listed buildings to his name.

Gloucester Quaker Meeting House of 1834-1835 to designs by Samuel Whitfield Daukes with a later extension by James Philip Moore, is listed at Grade II for the following principal reasons:

* for the survival of part of the original meeting house designed by Samuel Whitfield Daukes who has nearly 60 listed buildings to his name;

* for the little-altered meeting room interior which retains its historic character including sliding deal shutters between the two meeting rooms, and the high stand with panelled front and dado, flanked by steps;

* the classical design of the later addition by James Philip Moore provides a distinctive town-centre building.

* for its association with the adjacent and contemporary burial ground.

* with the adjacent Gatehouse to Forecourt of Society of Friends Meeting House, Priory House and 5-8 Priory Place (all Grade II-listed) and Glevum Roman Colonia (scheduled monument).