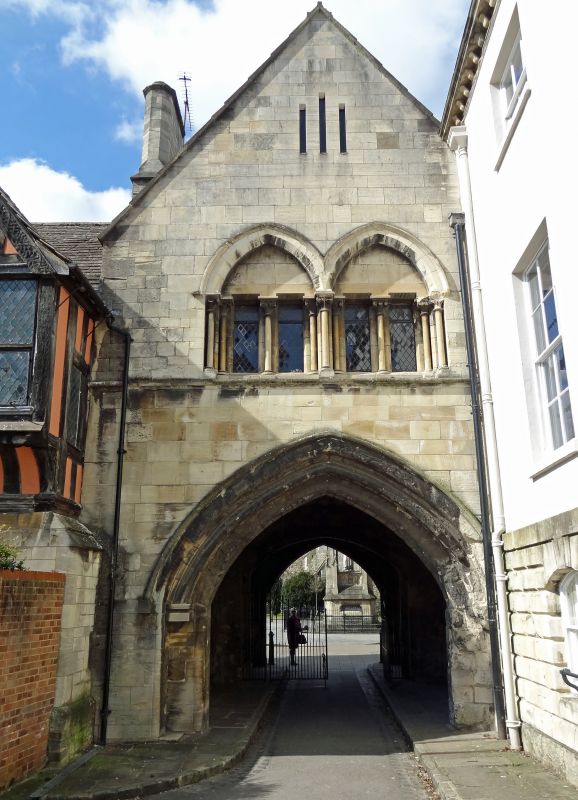 Formerly known as: College Gate COLLEGE GREEN.
Gatehouse, now includes offices. Late C12, refronted and
heightened in early C13; for the Benedictine Abbey of St Peter
as the Great Gate to the Outer Court of the monastery, now
part of College Green; altered in C18 and restored in late C19
by FS Waller for the Dean and Chapter of the Cathedral.
Ashlar, rubble, tiled roof, wrought-iron gates.
PLAN: gate passage leads from St Mary's Square into north-west
corner of College Green, passage covered by two bays of
quadripatite vaulting; with a large chamber at first-floor
level above the passage.
EXTERIOR: two storeys with cross gabled fronts facing the
street and the court; the outer front facing St Mary's Street
has a large arch to the passage with recessed orders to the
jambs, formerly with nook shafts, and at first-floor level an
arcade of four bays with the two inner bays flanked by smaller
bays; the inner bays framing windows with flat lintels; in the
gable a recessed triangular panel within which are the jambs
and arches of a three-bay blank arcade with the shafts
removed. The inner front above the archway to the passage
restored in late C19; similar to outer front.
INTERIOR: not inspected.
Scheduled Ancient Monument.
(VCH: The City of Gloucester: Oxford: 1988-: 282; Welander D:
The History, Art and Architecture of Gloucester Cathedral:
Stroud, Gloucestershire: 1991-).