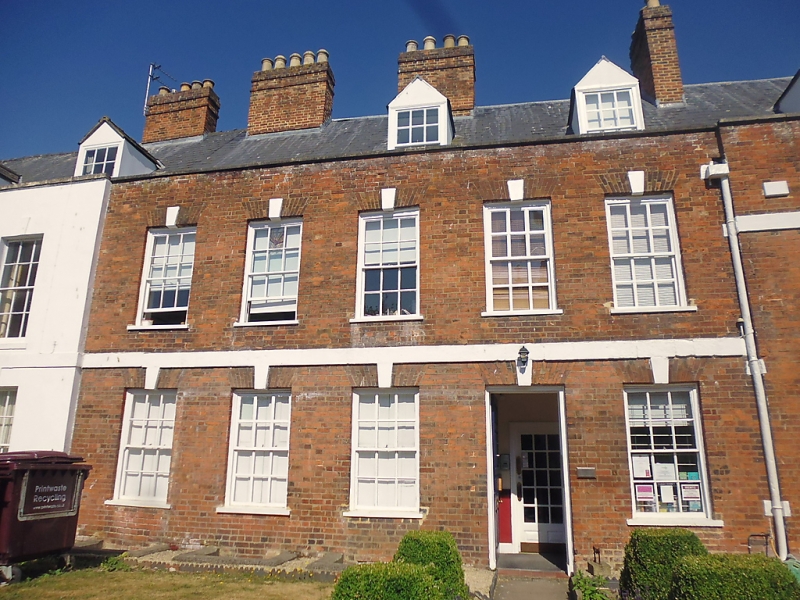 House with an assembly room adjoining to right, now offices.
1735-6 with later alterations. By John Pasco. Red brick in
Flemish bond with stone details, slate roof with gabled
dormers, brick ridge stacks. The former house double-depth
block; the former assembly room the same depth overall as the
house, originally one large room, now divided as offices with
an upper floor inserted.
EXTERIOR OF FORMER HOUSE: two storeys, attic and cellar; front
of five bays with offset plinth, raised stone band at
first-floor level, and parapet with stone coping. On the
ground floor the entrance doorway in the right hand bay, door
of six fielded panels in a plain opening. Sashes in bays to
left and on first floor with glazing bars (3x4 panes), all in
openings with rubbed brick flat arches set with raised
keystones and projecting stone sills; a gabled dormer with
sashes with glazing bars (3x3 panes) above the third and the
fifth bays.
INTERIOR OF FORMER HOUSE: early C18 staircase to first floor
with closed string, square newels, moulded handrail and
column-on-vase balusters; room to left of entrance hall has
restored C18 fielded dado panels, chair rail, fielded panels
above the rail, and moulded cornice; in room to rear a C18
chimney-piece with projecting key block in the lintel; on the
first-floor front a panelled room with an early C19
chimney-piece with reeded surround and paterae stops; early
C19 staircase to attic with column newels, stick balusters and
ramped handrail.
EXTERIOR OF FORMER ASSEMBLY ROOM: a tall single storey of four
bays with a large sash with original mid C18 thick glazing
bars (6x4 panes) in each bay, all in openings with rubbed
brick flat arches set with projecting keystones, a continuous
projecting stone band above the window arches and a tall brick
parapet with a slightly projecting plain brick panel to each
bay; four gabled roof dormers with sashes with glazing bars
(3x3 panes).
INTERIOR OF FORMER ASSEMBLY ROOM: fielded panel dado with dado

rail and fielded panel shutters in the window embrasures, in
the centre of the west wall above the dado a semicircular
niche with a shell head in plaster, the fireplace in the north
wall is partially obscured.
HISTORY: house built by John Pasco, master builder of Moulsey,
Surrey, as a speculation in partnership with Barnabas Gunn,
cathedral organist, on ground leased from the Bishop of
Gloucester;the site of the bishop's former stables.
The assembly room was originally used for concerts and as a
coffee room; was built to serve the enclosed community around
the Cathedral Close.
(Eward S: No Fine but a Glass of Wine, Cathedral Life at
Gloucester: Salisbury: 1985-: 318).