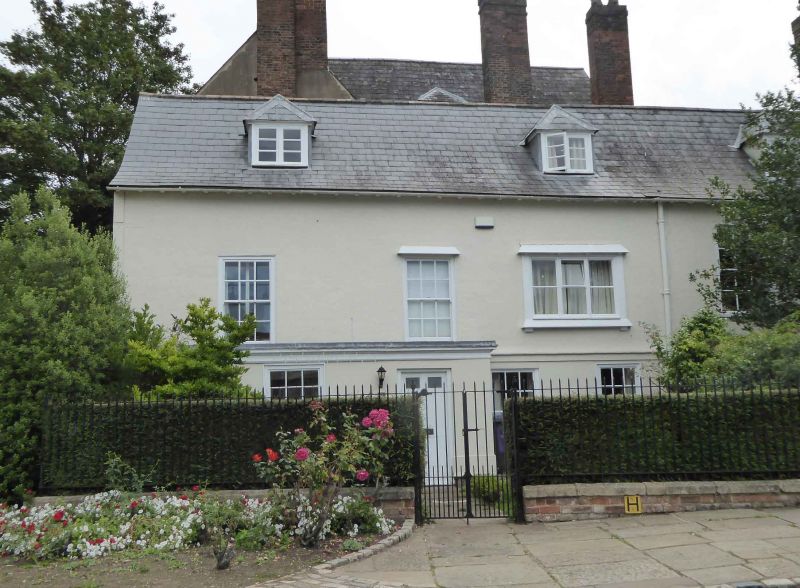 House, now offices. Late C1/ early C17 with C18 and late C19
alterations. Timber frame, rendered brick, end-gabled slate
roof with hipped roof dormers, brick stack at rear. Single
depth, end-gabled range built against the west side of the
former wall which separated the former lay and monastic
cemeteries.
EXTERIOR: two storeys and attic. On the front timber-framing
at first-floor level may be concealed by render and underbuilt
in brick, the outer roof slope raise raised as indicted by
timber-framing in the north gable. On the ground floor to left
is an added, flat roofed projection with crowning cornice; the
right hand end of the projection has a six-panel door with the
upper four panels glazed, and to left are two sashes with
glazing bars in the lower frames, to right of the projection
two similar sashes and a band at first-floor level. On the
first floor in the centre a sash and to left a sash, both with
glazing bars (3x4 panes), and to right a late C19 three-light
casement in projecting timber frame, two dormers each with a
pair of casements.
In the north gable-end wall a central, large timber-framed
panel inserted in late C19 containing at ground-floor level a
pair of sashes and at first-floor level a pair of similar
sashes, between the lower and upper sashes four small framed
panels with decorative diagonal bracing; in the gable exposed
original framing with collar tie and queen posts enclosing
rectangular panels, and diagonal struts in the angles.
INTERIOR: no features of special interest noted in partial
inspection; C16/C17 features concealed under later work.