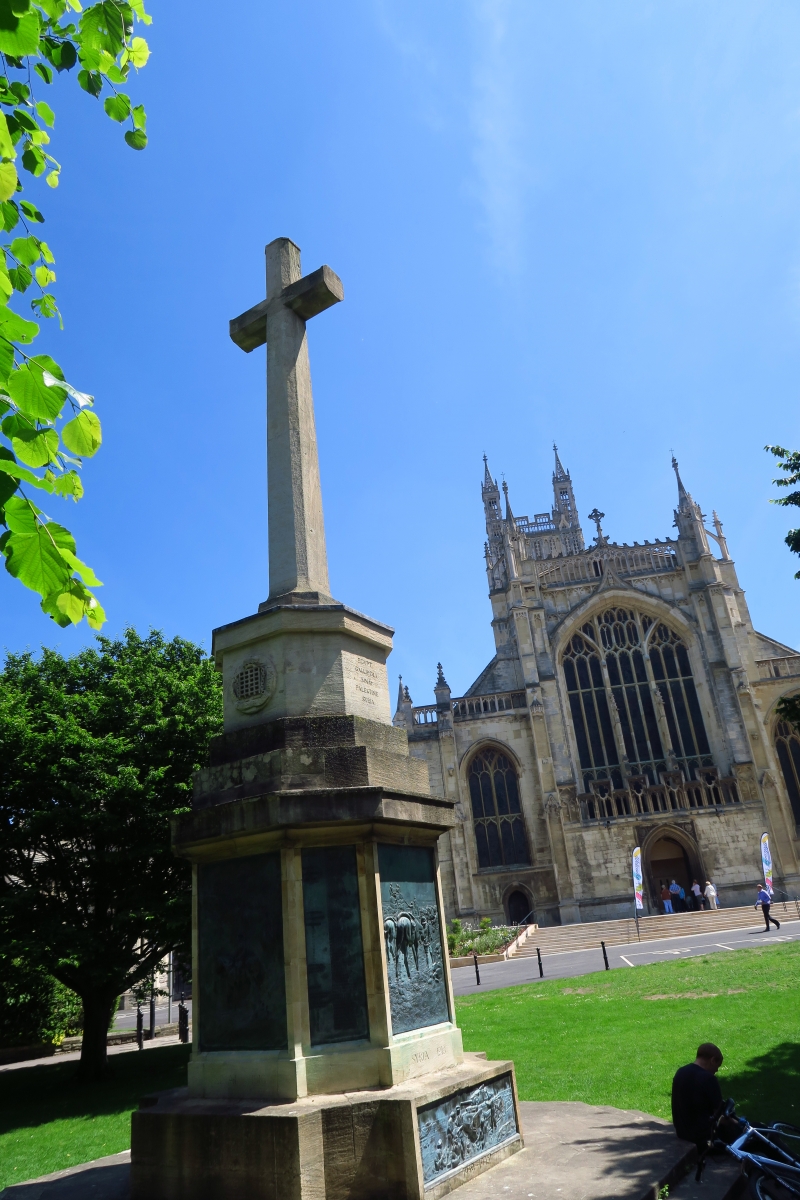 A First World War memorial to the Royal Gloucestershire Hussars Yeomanry, unveiled in 1922, by masons Cash and Wright; with bronze bas-relief panels by Adrian Jones MVO (1845-1938), cast by RL Boulton and Sons. The memorial was altered after the Second World War by the addition of a further relief panel by Edward Payne (1906-1991).

A First World War memorial to the Royal Gloucestershire Hussars Yeomanry, unveiled in 1922, by masons Cash and Wright; with bronze bas-relief panels by Adrian Jones MVO (1845-1938), cast by RL Boulton and Sons. The memorial was altered after the Second World War by the addition of a further relief panel by Edward Payne (1906-1991).

DESCRIPTION
The memorial takes the form of a tall cross having a sword carved in relief on its front face, with the regimental badge in relief on the foot below the shaft of the cross. Other faces of the foot are inscribed: EGYPT / GALLIPOLI / SINAI / PALESTINE / SYRIA. This is set on a high octagonal plinth in the centre of a wider octagonal base or podium surrounded by three steps. A bronze panel, by Adrian Jones, is inset into each face of the plinth: four of the panels are bas-reliefs, each depicting a scene of soldiers of the regiment serving during WWI in campaigns as inscribed: Siniae [sic] 1916, Palestine 1917, Gallipoli 1915, Syria 1918; and alternating with the reliefs are four panels inscribed with the names of the 225 men who died during the First World War. The panels depict specific incidents. Gallipoli shows 21 August 1915, with troops climbing a high cliff behind Lala Baba Hill on the shore, before advancing across the dry bed of the Salt Lake, where they sustained heavy casualties. Sinai is sculpted from a photograph taken during the many months the regiment was stationed in the desert, and shows the soldiers, mounted, descending the steep slope of a sand hill with palm trees behind. Palestine shows the scene in February 1918 when the regiment, after three months of fighting, crossed the River Jordan, sending over rafts and setting up pontoon bridges. The final panel, Syria, encapsulates much of the regiment’s experience, showing as it does, tired and thirsty horses being rested and watered after a long trek through the country.

The plinth stands on a wider base, one face of which is inscribed IN MEMORY OF THE MEMBERS OF THE / ROYAL GLOUCESTERSHIRE HUSSARS / WHO GAVE THEIR LIVES / IN THE WAR 1939 -1945 / AND WHOSE NAMES ARE RECORDED IN / GLOUCESTER CATHEDRAL. The adjacent face carries an inset bronze bas-relief panel added in 1950, sculpted by Edward Payne. The panel is a composite scene with soldiers and tanks. Beneath the dates 1939 – 1945 are carved.

The whole memorial stands on a platform of three wide, shallow steps.

This List entry has been amended to add the source for War Memorials Online. This source was not used in the compilation of this List entry but is added here as a guide for further reading, 10 January 2017.

The war memorial to the men of the Royal Gloucestershire Hussars Yeomanry who died in the First World War was planned in 1919. A very significant site was secured, outside the Cathedral Church of the Holy and Indivisible Trinity, Gloucester, on College Green, which was remodelled to incorporate the memorial. The stone memorial was to be made and carved by Cash and Wright, masons. The Royal Gloucestershire Hussars Yeomanry had fought in France and in the Middle Eastern campaigns, and the memorial commemorated these in particular, with bronze relief panels set into the stone memorial, depicting the regiment and their horses in action in Gallipoli, Sinai, Palestine and Syria, alternating with inscriptions of the names of the men who died in the course of the First World War. As the Gloucester Journal reported in November 1919, “Steps have been taken to secure the services of distinguished sculptors who are to be entrusted with a design which will be worthy to perpetuate the memory of those whose lives we wish to commemorate.” To this end, the sculpted panels were commissioned from Adrian Jones, MVO (1845-1938), a highly distinguished sculptor who, before becoming a full-time artist, had been an army veterinary surgeon. As a sculptor and painter Jones exhibited frequently at the Royal Academy throughout his career; he specialised in work including animals, especially horses, at which he was particularly successful in part due to his veterinary training and his time in a cavalry regiment. He created the dramatic equestrian sculpture “Peace descending on the Quadriga of War”, on top of the Wellington Arch at Hyde Park Corner in London (Listed Grade I), together with a number of other commemorative bronzes, including the Royal Marines National Memorial in St James’s Park (1903, listed Grade II*).

By October 1920 the form and design of the war memorial had been developed to the point where a timber model of the proposed structure was set up on College Green, for the approval of the Dean and Chapter of Gloucester Cathedral. Permission was granted; the memorial was completed as planned, and unveiled by Lt Gen P W Chetwode, Bart, KCB, KCMG, DSO, on Saturday 29 April 1922.

Following the Second World War, the memorial was altered by the addition of a new bronze relief panel on the base, designed by Edward Payne (1906-1991), stained glass artist, painter and sculptor, and son of Henry Albert Payne RWS (1868-1940), stained glass artist, watercolourist and fresco painter, who was strongly influenced by the Arts and Crafts movement and, with his wife, was a member of the important Birmingham Group of artists and craftsmen. Henry Payne and his family settled in the Minchinhampton area of Gloucestershire in 1909, becoming a member of the Sapperton Group of Arts and Crafts designers. Edward worked closely with his father, until Henry died in 1940, and, on his return from service in the Second World War, Edward continued his work as a stained glass artist, painter and sculptor. Edward Payne was in charge of the repairs to stained glass windows in Gloucester Cathedral from the 1960s to the 1980s, and in time two of his own windows were installed in the cathedral as war memorials. He contributed other windows to a large number of churches in the area, including three at St Barnabas in Box, Minchinhampton, the first new church to be built in stone after the Second World War, in whose design Payne also had a hand. The relief sculpture he created for the Royal Gloucestershire Hussars Yeomanry memorial continues the theme of Adrian Jones’ reliefs, showing the men in action. In 1922, the regiment had ceased to be a cavalry regiment, and instead became a tank corps, and Edward Payne’s relief, added in 1950, reflects this change, showing soldiers engaging from a tank rather than from horseback.

The Royal Gloucestershire Hussars Yeomanry war memorial is listed at Grade II*, for the following principal reasons:
* Historic interest: as an eloquent witness to the tragic impact of world events on the regiment, and the sacrifice it made in the conflicts of the C20;
* Artistic interest: a well-executed stone memorial, with the addition of striking and highly accomplished bronze bas-reliefs by acclaimed sculptor Adrian Jones, MVO (1845-1938), showing the men and horses of the regiment in action in the Middle East, including scenes in Egypt, Syria, Palestine and the Dardanelles;
* Group value: with the important group of listed buildings surrounding the green on which it stands: Gloucester Cathedral (listed Grade I), and the numerous other listed buildings forming the cathedral close.