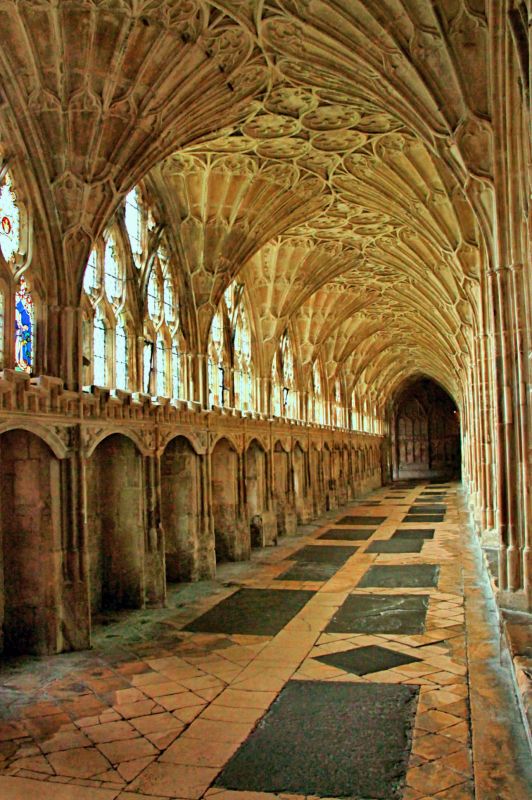 Cloister on the north side of the nave of the Cathedral Church
of the Holy and Undivided Trinity (qv); until 1538 the great
cloister of the Benedictine Abbey of St Peter. Six bays of the
east alley from the transept of the Cathedral Church to the
door of the Chapter House (qv) built c1360, probably by Thomas
of Cambridge, master-mason, for Abbot Horton, and notable as
the earliest recorded use of fan vaulting in England; the
other alleys built 1381-1412 to the same general design, but
with slightly different details, by Robert Lesyngham,
master-mason; restored in C19 and C20.
MATERIALS: ashlar, lead roofs; roof timbers above the south
alley replaced c1960 by pre-stressed concrete construction.
PLAN: a large, square garth with a cloister alley on each
side, each of ten bays between corner bays; the lavatorium in
the cloister projects into the garth at the west end of the
north alley (bays 2-5).
EXTERIOR: the garth wall of the east alley of nine bays with a
narrower tenth bay at the south end, the bays defined by
mostly narrow but also several wider buttresses, all in two
stages, with lower raking offsets and thin strip buttresses
above which offset under a continuous, crowning, moulded
string course with coped parapet; at the bases of the lower
offsets to the buttresses a moulded string course which
continues across the face of the window in each bay as a
boldly projecting transom designed to throw off rainwater; in
each of the nine full-width bays a large eight-light, arched
window with a central super-mullion supporting two major
arches which divide the tracery pattern of intersecting ogee
arches to the lights at springing level and foiled panels
above, the narrow tenth bay at the south end of six-lights
with similar tracery.
In the garth wall of the south alley each of the ten bays,
defined by similar buttresses, is infilled to the level of the
moulded string course at the base of the buttress offsets by
walling pierced by two small two-light windows with traceried
heads which light carrels within the alley; above the string

course in each bay a six-light window with tracery of similar
but less complex pattern than in the windows of the east
alley.
The west alley also of ten bays with full-height windows with
tracery similar to the south range; in the north range, except
for bays which contain the lavatorium, the design of the
windows and buttresses is similar to the west range.
The outer wall of the lavatorium projecting onto the garth is
of four bays defined by buttresses with offsets and crowned by
pinnacles, in each bay two two-light windows facing the garth,
and a similar window at each return end of the projection.
INTERIOR: the design of exceptional interest; generally in
each alley the bays defined by slender wall shafts with
moulded bases and capitals which rise to support the springing
of the conoids of the fan vaulting, on the inner walls in each
bay a blind panel, framed by the wall shafts and vaulting,
reflects the pattern of the opposite window in the garth wall
unless interrupted by a door or window opening.
In the east alley are doors to the Chapter House and former
Monks' Dormitory (qv).
In the south alley within the garth wall are twenty carrels or
desk recesses, two to each bay, each opening with a moulded
segmental-arched head, and all surmounted by a richly
embattled cornice, and with cloister windows above.
In the north alley four bays of the garth wall open through
two arches in each bay into the lavatorium, and within the
lavatorium are eight bays with fan vaulting; along its outer
wall a stone bench for a trough for washing, opposite in the
inner wall a groined recess for towels, in the west corner bay
a C13 doorway with jamb shafts and moulded arch to the former
Refectory; against the north wall a stone bench with scratched
lines for games identified as Nine Men's Morris.
(Welander D: The History, Art and Architecture of Gloucester
Cathedral: Stroud, Gloucestershire: 1991-: 215; VCH: The City
of Gloucester: Oxford: 1988-: 227; BOE: Verey D:
Gloucestershire The Vale and the Forest of Dean: London:
1976-: 219-20).