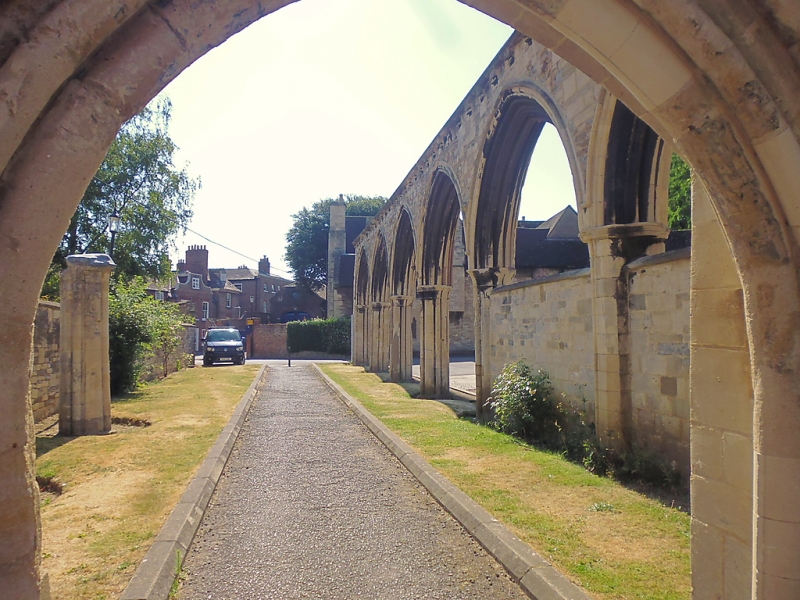 Remains of the Infirmary Cloister (Little Cloister) of the
former Benedictine Abbey of St Peter; item includes the west
alley of the cloister below the east side of Litte Cloister
House (qv). Early C15, except for the garth walls the east and
west alleys demolished c1650, the remains restored in C20.
Ashlar, lean-to possibly lead covered roof above the south
alley.
PLAN: an approximately square garth, originally on each side
an alley of five bays between the corner bays; the south alley
abutting part of the north wall of the former monastic
refectory, above the west alley the east side of the
timber-framed upper floors of Little Cloister House (qv), on
the north and east the surviving garth walls.
EXTERIOR: each bay of the garth walls on the north, east and
south sides are defined by offset buttresses and on the west
side by strip buttresses, a substantial ashlar buttress in the
south-east corner; in each bay a full-width window panel of
three-lights with the mullions intersecting with a moulded
cornice over the panel, in the head of each panel tracery
comprising an arch cut by the mullions and with trefoiled
heads to each light and with a quatrefoil in the head of the
arch, above the arch a pair of foiled lights in each spandrel;
in the south bay of the west alley a segmental-arched doorway
incorporated into the tracery of the panel.
INTERIOR: in the garth walls the window panels framed by
single shafts rising to a continuous rollmoulding with moulded
cornice above, in the south alley exposed roof framing.
Scheduled Ancient Monument.
(Welander D: The History, Art and Architecture of Gloucester
Cathedral: Stroud, Gloucestershire: 1991-; BOE: Verey D:
Gloucestershire: The Vale and the Forest of Dean: London:
1976-: 222).