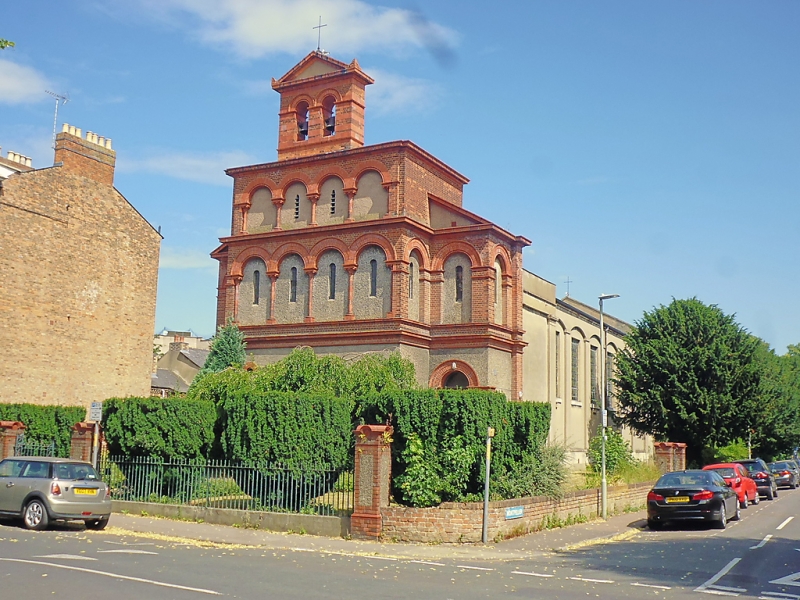 Anglican church. Built 1822-3 by Rickman and Hutchinson; chancel enlarged in 1865; internal alterations and addition of north vestry by Waller, Son & Wood in 1883. West front rebuilt, and interior remodelled 1899-1900 by H A Prothero and G Phillott; some late-C20 alterations and a vestry addition.

Anglican church. Built 1822-3 by Rickman and Hutchinson; chancel enlarged in 1865; internal alterations and addition of north vestry by Waller, Son & Wood in 1883. West front rebuilt, and interior remodelled 1899-1900 by H A Prothero and G Phillott; some late-C20 alterations and a vestry addition.

MATERIALS: it is constructed of stuccoed brick with vermilion terracotta and grey roughcast dressings. The roof is clad in slate.

PLAN: it is orientated north-west to south-east and includes a nave of seven bays, a sanctuary with projecting polygonal apse, north vestry and west gallery. The west front of 1899-1900 comprises an added bay across the width of the nave with a projecting, narrower central block of one bay deep and four bays wide.A flat-roofed extension was added to the north elevation in the late-C20 and is of lesser interest.

EXTERIOR: built in a Neo-classical style with a monumental French Romanesque style west front. The west end has a central projecting block of three stages which reduce sequentially in height and single lateral bays which are lower and mark the end of the nave. The front has an offset brick plinth. The ground floor of the central block has four lancet windows with leaded lights and terracotta voussoirs to the semi-circular arched heads. The flanking bays each has an entrance, approached by stone steps, with pairs of panelled doors and leaded fanlights under a semi-circular arched heads of terracotta voussoirs and brick jambs with roll mouldings of terracotta. On the wall adjacent to each of the entrances is the decorative fitting for a gas light. In addition there is a cast-iron boot scraper to the lower entrance step. The intermediate stage has a deep cornice of brick and terracotta to the central block, its returns, and the recessed side bays. A four-bay arcade of red terracotta is applied to the recessed face between the brick piers at the outer angles and has columns with moulded bases and foliate capitals and semi-circular arches with a continuous dripmould. In the recessed face of each bay is a lancet window with leaded lights. The upper storey of the returns, the lateral bays and their returns have a matching arrangement with a single light in a recessed arch to each face. The lateral bays, which are of two stages, have a pedimental treatment to the sections of the gable which are visible. The four-bay arcade to the top stage of the central block is similar to the intermediate stage but without a drip-mould, and in the two central bays each has a small lancet with louvres. The Greco-Byzantine pedimented double bellcote has twin-arched openings for the bells. The rendered walls of the north and south elevations of the church have plain pilasters supporting shallow blank arches and large rectangular windows, to all but the wider westernmost bay. At the east end of the north elevation is the late-C19 vestry which has a hipped, slate roof. It has shallow blank arches to each side, with a square-headed window in the east wall. Attached to its west elevation is the additional late-C20 vestry (of lesser interest) which has two windows to its north elevation and a plain doorway to the west side. The east end of the church is also rendered with single lancets set high within shallow arches to each bay of the apse. To either side of the apse is a small lancet with louvres, also high in the gable, and a shallow blank arch beneath.

INTERIOR: each of the entrances leads to a vestibule with a pair of half-glazed panelled doors. Timber and glazed screens were introduced to the front of the vestibule and below the balcony in the 1980s. The broad nave has plastered and painted side walls with timber panelling to the lower parts, and the bays are defined by pilasters with simple moulded capitals. Most windows in the nave retain stained glass with an all-over honeysuckle motif contemporary with the original structure. The nave has a flat, panelled ceiling of 1882-3, to which Prothero added a deep plaster cornice with swags, and a narrow, central barrel-vaulted ceiling which terminates in the semi-dome within the apse (qv Christ Church, Cheltenham by the same architect). The tie beams to the barrel-vaulted section are embellished with decorative sun bosses. The organ chamber at the north-east corner of the nave contains an organ of 1866 by John Nicholson of Worcester, it was turned to face west in 1883. The memorial chapel in the south-east corner has a simple timber screen of 1950 with raised panels. A simple, stone font is situated in the south-west corner of the nave. The deep cornice continues through to the chancel. The apse is decorated with wall paintings of 1910-11 by James Eadie Reid, depicting apostles above a frieze of angels, with God the Father flanked by striking red-winged angels. The west gallery and meeting rooms are accessed from a staircase with iron stick balusters and a reeve curtail newel.

FITTINGS: dividing off the choir space at the east end is a low stone Screen with carved consoles and an attached richly-carved circular stone pulpit dating from the 1883-4 restoration by Waller, Son & Wood. The matching reredos, also of 1883-4 is by the same firm and has been moved to the entrance lobby. The pews also date from 1883-4, and the altar table, with painted front, is by J Eadie Reid, 1908.

STAINED GLASS: the stained glass in the nave windows date from 1883-4 and have a repeating anthemion motif within wide foliage borders. The three windows at the east end have been replaced: the north-east by William Morris & Co. (Westminster) Ltd., 1953-4; south-west chapel window by Edward Payne, 1960, and the south-east chapel window by Lavers & Westlake, 1887. The three apse windows of 1908 are by Eadie Reid.

MONUMENTS: there are numerous C19 memorial wall tablets, mainly plain Grecian, by Gloucester and Cheltenham statuaries. The earliest dates from c.1828 by Cooke and J Lewis and is situated in the nave; the largest, with a draped urn, is by G Lewis of Cheltenham, c.1842.

SUBSIDIARY FEATURES: to the front (west) of the church is a low stone plinth with iron railings and a gated entrance. The red brick gate piers have roughcast rendering to their central panels and decorative terracotta caps with a small terracotta panel carved with a cross in relief to each face. There is a pair of decorative gates. To the south-west corner, at the junction between Brunswick Road and Montpellier, is a similar brick pier. Along Montpellier there is a low boundary wall of red brick and a stepped side entrance with a matching pair of gate piers and iron gates to those on the west side.

Christ Church was built at the suggestion of Henry Rider, Bishop of Gloucester, in 1822-3, in order to serve the expanding population of the Gloucester Spa development and the hamlet of Littleworth. The church was designed by Thomas Rickman and Henry Hutchinson and was funded by public subscription and by issuing shares. It was built in a plain Neo-classical style, comprising a nave, small chancel and a west tower. The church was originally dedicated to Holy Trinity, and on a map of 1841 it is called ‘Spa Church’. In 1865 the nave was extended to the east with an apsed sanctuary. In 1877 Holy Trinity was taken over by the diocese and was re-named Christ Church. It was restored in 1883-4 by Waller, Son & Wood at which time the division between chancel and nave was moved westwards and a low stone screen was erected, the west gallery was repositioned and the north vestry was added.

However, the most significant changes to the building took place in 1899-1900, when the west front was rebuilt in a monumental French Romanesque style by the architect Henry Allen Prothero, the new front replacing the original entrance and the bell turret. Prothero and his partner, George Phillott, also altered the interior with the addition of a central barrel vault that extends into the sanctuary apse, which itself was enlarged. Further internal decorative work took place in the early C20 when James Eadie Reid was commissioned to produce the three apse windows (1908) and the wall paintings in the apse (1910-11). Reid did similar work at Christ Church, Cheltenham and the Church of Saint Philip and Saint James, Up Hatherley. In 1950 the southern section of Waller, Son & Wood’s stone screen was removed to make way for a memorial chapel in the south-east corner of the church. the chapel was designed by Harold Stratton Davis, a Gloucester-based architect specialising in church alterations and furnishings. During the 1980s glazing was introduced to separate off the west end and some of the pews were removed.

Christ Church which was built in 1822-3 by Rickman and Hutchinson, enlarged in 1865 and restored in 1883 and 1899-1900, with minor alterations in the mid- and late C20, is listed at Grade II for the following principal reasons:
* Architectural interest: its striking west front of 1899-1900 is a confident and robust composition with careful terracotta detailing, and the interior has considerable spatial quality;
* Architects: the form and internal decoration of the church has evolved in the hands of several notable firms of architects. Prothero’s finely-detailed design for the nave ceiling contributes significantly to the architectural distinction of the church;
* Decoration: of particular note are Reid’s paintings in the sanctuary which combine artistic merit and quality craftsmanship, and the richly-detailed stained glass of various dates.