Blackfriars Church and Part of East Range of Friary 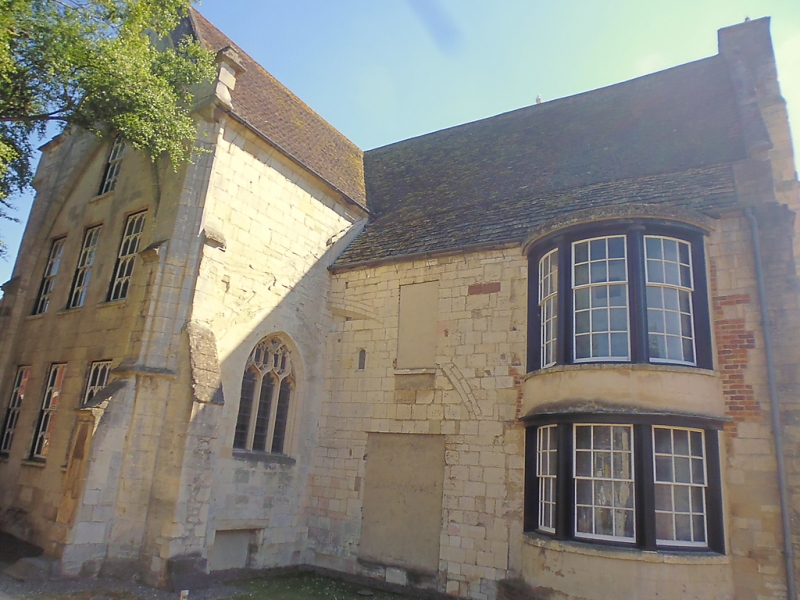 Formerly known as: Nos.7, 9 AND 11 BLACKFRIARS.
Substantial remains of the church and adjoining east claustral
range of the Dominican friary (Blackfriars) founded 1239 by
Sir Stephen de Hermshall (Harnhill) and largely built with
funds and materials donated by King Henry III; consecrated
1284; late C14 alterations principally to church. After
dissolution of the friary the church reduced in size and
remodelled in conversion to house, and the claustral buildings
converted as a cloth manufactory, for Sir Thomas Bell, a
merchant cloth maker and draper; various alterations in C18,
C19 and C20 for multiple domestic and commercial uses; from
c1960 an Ancient Monument in the care of the Ministry of Works
and successor government departments with the implementation
of a programme of conservation continued since 1964 by English
Heritage for public display and use of the building.
Friary buildings of stone rubble with dressed stone features,
added structure in ashlar for conversion to house, roofs
relaid c1970 in plain tile, with stone slate verges to the
roofs of the former church.
PLAN: originally a cruciform church comprising a long chancel,
crossing with north and south transepts, and an aisled nave.
In C16 conversion to house the former chancel and nave were
truncated and closed by gable-end walls with central
projecting chimney-stacks; the north nave aisle completely and
the south aisle partially demolished, and the nave arcades
infilled and partly refaced; a large canted bay window added
at the west end of the north wall; the former chancel
remodelled with new fenestration to form the great hall, and
floors and partitions inserted into the former transepts and
nave to form chambers; the south transept subsequently
demolished. In mid C20, following the removal of internal
post-medieval features, the south side of the former crossing
was closed by a glazed, steel frame screen, c1970. The north
end of the east claustral range abuts the south wall of the
chancel on the east side of the south transept. The southern
end of the east range, including the former chapter house, is
demolished.
EXTERIOR: the north side of the church remodelled 1540-45 as
the main front of the house and altered in late C18 when the
house was divided into two dwellings; two storeys and attic
with a central projecting wing (the former north transept of
the church); to left of the wing two large four-light
mullioned windows inserted to light the great hall (the former
chancel). The gable-end of the central wing has corner
buttresses set back from canted angles; the infill in the
former C14 large gable-end window is pierced for late C18
sashes, three sashes to each of the former two floors and one
lighting the former attic, all of similar size and framed in
mahogany with glazing bars (3x4 panes) and a trefoiled head to
each pane, the window openings now blocked internally; in the
north wall of the wing a reset C14 three-light window with
restored tracery.
INTERIOR: since 1960 all post medieval floors and partitions
removed to expose the proportions of the church and surviving
medieval features. These include portions of the moulded C14
crossing piers, C14 flying arches in the west wall of the
north transept, and in the east bay of the north arcade of the
nave an arch inserted to support the north-west pier of the
crossing when the former central tower was rebuilt; remains of
C13 piers in the nave are largely concealed by C16 infill; in
the chancel evidence of C13 arcading originally framing lancet
windows above a continuous string course on the north wall and
on part of the south wall. The C16 walls blocking the
truncated ends of the former nave and chancel retain moulded
chimney pieces at the former ground and first-floor levels of
the house, on either side on each floor, mullioned windows
with arched heads to the lights. Above the nave and chancel is
a remarkable surviving example of an open timber roof with
C13, close-set scissor trusses. The north end of the east
range has doors and windows of various dates and C13 timber
scissor trusses in the open roof.
Scheduled Ancient Monument in guardianship since 1960.
(BOE: Verey D: Gloucestershire: The Vale and the Forest of
Dean: London: 1976-: 226-227; VCH: The City of Gloucester:
Oxford: 1988-: 290-291).