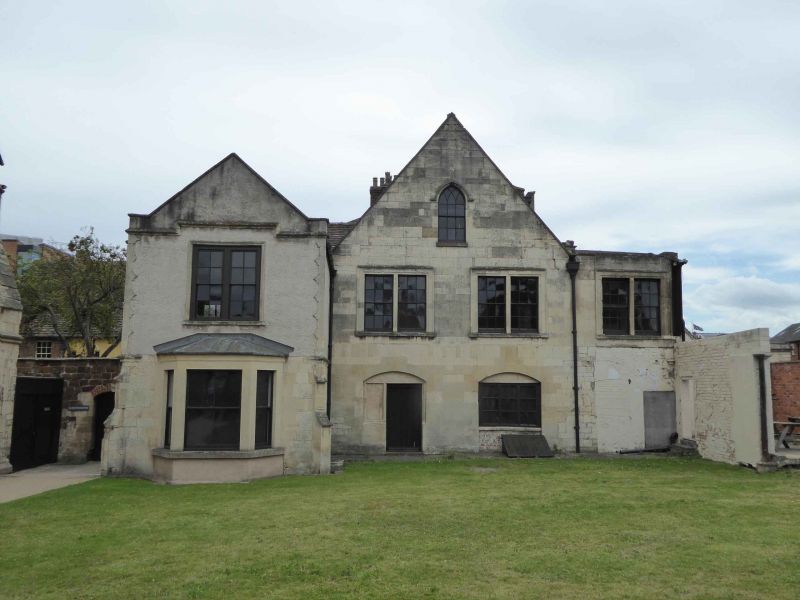 Includes: North End of West Range, Blackfriars LADYBELLEGATE
STREET.
Part of Dominican friary (Blackfriars), the north end of the
west claustral range converted and extended as a house. Mid
C13, remodelled 1540-45 as part of house or as cloth
manufactory for Sir Thomas Bell; late C18 alterations and
additions; now in the care of English Heritage. Stone rubble
with dressed stone features, ashlar, brick, slate roof.
PLAN: north end of C13 range divided from the main part of the
range (the refectory) by C13 cross wall; a small closet wing
added on the west side in late C18 and a gabled wing on the
east side with a further cross wing projecting north.
EXTERIOR: two storeys and cellar; the upper storey now opened
into the former attic. The north gable-end of the range
remodelled as main front of the house with ashlar facing and
coped gable; the ground floor, partly obscured by a temporary
building to the north, has a three-light, stone-framed mullion
window to right; on the first floor a symmetrical pair of
stone-framed mullion windows of two lights with moulded
architraves; a similar two-light window to first floor of wing
to right; each light contains a late C18 sash with glazing
bars (3x4 panes); in the gable a pointed arched window with
hoodmould contains a late C18 sash with intersecting glazing
bars in the head.
INTERIOR: on the ground floor exposed C13 and C16 masonry and
a C19 chimney-piece with a stone surround; exposed above the
first floor a remarkable surviving C13 open roof with
close-set timber scissor trusses within former attic; cellar
formed in late C18.
Formerly listed as No.11 Ladybellegate Street. Now part of
Ancient Monument which includes Blackfriars Church (qv), in
the care of English Heritage.