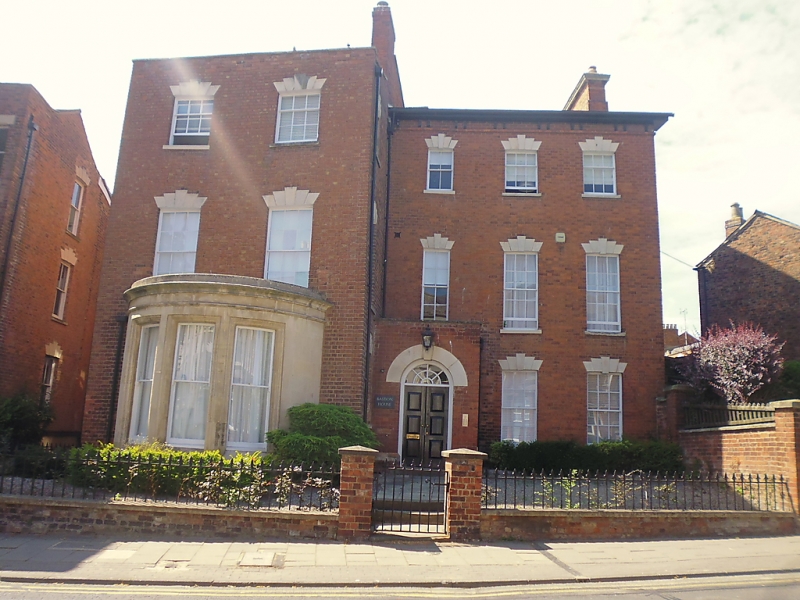 House, now offices. c1820, late C19 alterations. Brick with
ashlar details, slate roof, brick stacks with chimney pots.
Three-storey block with a slightly later, three-storey cross
wing projecting to front left, and a single-storey entrance
porch built into the re-entrant angle; added onto the front of
the wing a single-storey late C19 bow window in ashlar.
EXTERIOR: three storeys, attic and cellar; offset stone
plinth; on the front the main block has boxed eaves supported
on pairs of brackets; a parapet to the front wing; on the
ground floor the entrance doorway to the porch with brick
jambs and a semicircular stone arch set with a raised keystone
has a fanlight with radiating glazing bars; to right of porch
two sashes with glazing bars (3x4 panes); on the first floor
above the porch a narrow sash with glazing bars (2x4 panes)
and to the right two sashes similar to the sashes below on the
ground floor; on the second floor three shorter sashes with
glazing bars (3x2 panes above the porch and 3x3 panes to the
right); on the front of the wing the added, late C19,
single-storey, ashlar bow has a moulded crowning cornice with
frieze band and blocking course and three curved, plate-glass
sashes in openings with moulded stone jambs, flat arched
heads, and sloping sills; the front of the wing on both the
first and second floors has two sashes with glazing bars (on
the first floor 3x4 panes and on the second floor 3x3 panes);
on the return north side of the wing sashes with glazing bars
(on the ground and first floors 2x4 panes and on the second
floor 3x3 panes); all the original sashes in openings with
five raised and stepped voussoirs to flat arched heads and
projecting stone sills. Mid C19 rear block with full-height
canted bay, glazing bar sashes and rusticated quoins.
INTERIOR: not inspected.
House is built on the site of the bastion at the south-east
corner of the defences constructed 1644-51 to defend the City
of Gloucester in the Civil War siege by Royalist Forces.