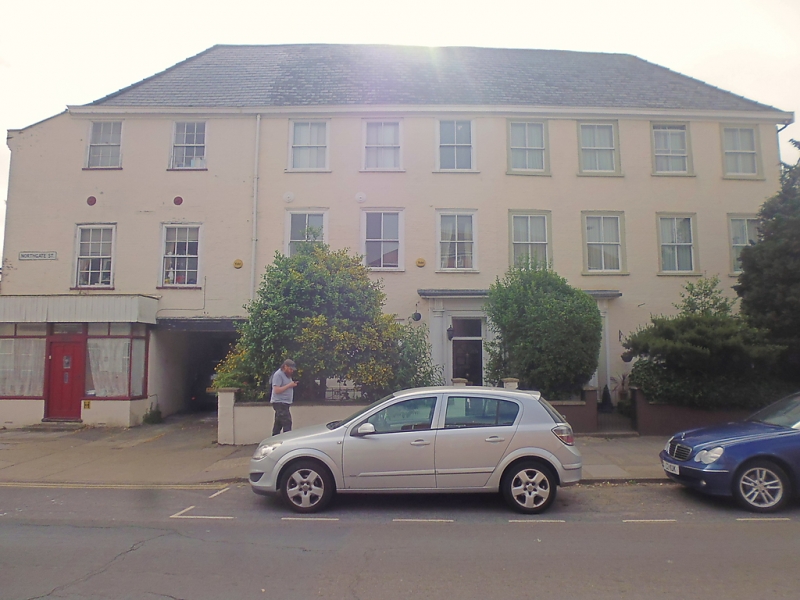 Terrace of 2 late C18 houses, extended to the north early C19
to form 3 houses. Built against a wall of a C14 building.
Colourwashed brick under a slate roof.
EXTERIOR: 3 storeys. No.220 has 2-window range, No.221
3-window range, No.222 4-window range. No.220 to north is
built over the line of the C14 town wall in its north return.
Facade with a C20 shop display window and a passageway to the
right of this. Two 2/2 horned sashes to first floor and 2
similar second-floor sashes, one without horns. No.221 has its
doorcase set to right and No.222 has its door set next to it,
both identical: late C20 6-panelled doors under plain
overlights; panelled reveals. Doorcases with pairs of reeded
columns under stippled block entablatures. Reeded frieze under
hoods. Two 2/2 sashes left of door to No.221 and 3 to each
floor above. Gauged arches and occasional horns. No.222 has
two 2/2 sashes right of the door with gauged skewback arches
and four 2/2 sashes each floor above, occasionally with horns.
Hipped roof. The rear shows evidence of a late C14 building
with 5 pointed-arched windows with brick jambs and a blocked
sixth window, all at first-floor level. Excavations in 1973
showed remains of an arched door to ground floor. Fenestration
now of C20 casements.
INTERIOR of No.222: staircase with 2 turned balusters per
tread, mostly renewed 1973. Interior otherwise late C20 in
character. Roof partly rebuilt.