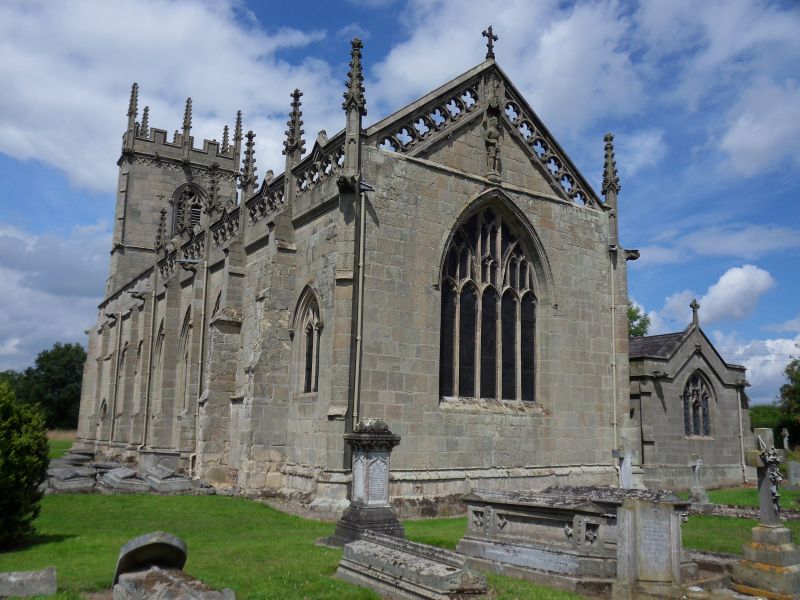 Church. Early C15, restored 1862 by Pountney Smith. Coursed
and squared limestone with plain tiled and Welsh slate roofs.
West tower, nave with single south aisle, chancel.
EXTERIOR: 2-stage west tower with doorway and 2-light
traceried window over in west wall, and paired foiled bell
chamber lights in the upper stage. Stair turret projects from
south wall. Embattled parapet with quatrefoil frieze and angle
pinnacles. Nave of 3 bays divided by pilaster buttresses, with
doorways to north and south. Windows mostly recut on
restoration in late Decorated style, though one window to
north has reticulated tracery of an earlier pattern. Long
chancel, with reticulated traceried windows to south,
partially concealed by chapel added during restoration to
north. Foundations of further range of building visible
towards south east. Plain parapet to nave, openwork quatrefoil
parapet to chancel. Gargoyles, some representing fighting
figures. 5-light Perpendicular east window with statue of
soldier King Henry IV in niche over.
INTERIOR: single space, single span with tall double chamfered
tower arch and hammer beam roof with shields as bosses,
pendants, and traceried panelling between braces and rafters.
Timber screen with traceried panels and ogee central arch
dividing the nave, inserted during restoration and marking a
division of the building made during the C18, when only the
eastern end was in use. Encaustic tiled floor throughout,
possibly by Maw's. Sedilia, squint and blocked doorway in
south wall adjacent to altar, the squint formerly accessed
from vanished southern range. Reredos with high relief
nativity, crucifixion and resurrection in traceried panels.
Emblematic stained glass throughout, and figures of apostles
to chancel, and Mary Magdalene in the east window.
Corbet family mortuary chapel to north, with stained glass
dated 1864, and fragments of C15 glass originating in
Normandy. Corbet tomb to north of chancel, 4 traceried panels
forming vaulted sanctuary. Wood Pieta on north wall resited
from the church at Albright Hussey.
HISTORICAL NOTE: the church was built as a chantry established
by King Henry IV to commemorate the Battle of Shrewsbury
fought nearby in 1403. After 1545, it became the parish church
for the old parish of Albright Hussey, and is now maintained
by the Redundant Churches Fund.