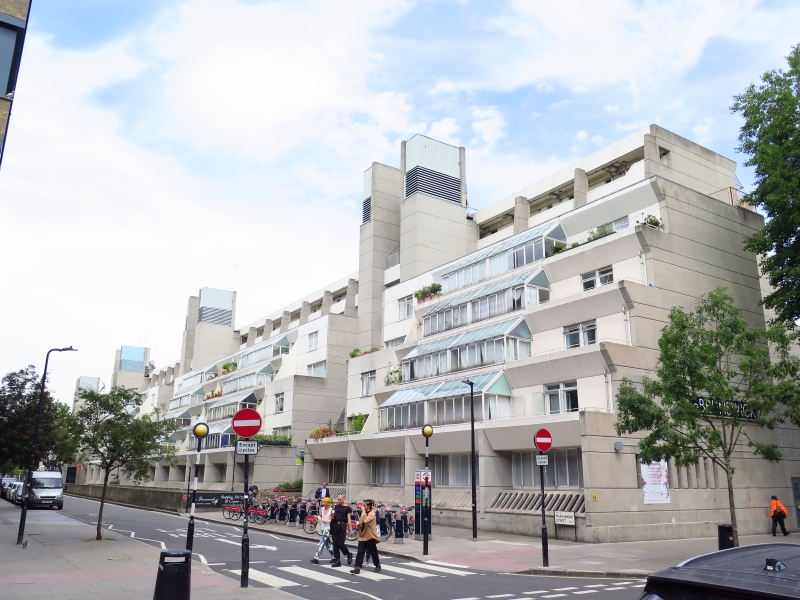 Entry Name: 1-187A O'donnell Court and 1-212A Foundling Court and Renoir Cinema and Shops (The Brunswick Centre) and Basement Car Park and Attached Ramps and Steps and Studios

Two linked blocks of 560 flats, incorporating rows of shops at raised ground level over basement car -parking on two levels, with attached workshops, ramps and steps. 1967-72 by Patrick Hodgkinson for Marchmont Properties and LB Camden, completed by L Brian Ingram and T P Bennett and Partners. The first scheme prepared 1960-3 with Sir Leslie Martin, subsequent scheme developed 1963-5 by Hodgkinson, and modified 1966-8, assisted by F D A Levitt, A Richardson, D Campbell and P Myers. Engineers McAlpine Design Group, and Robert McAlpine and Sons were the builders. Reinforced concrete, some now painted as was always intended, glazed roofs to part of each flat, otherwise roofs are flat. Flat roofs over shops form terraces serving the flats, on which are placed small 'professional studios'.

Complex megastructure of two 'A-framed' blocks, O'Donnell Court and Foundling Court, linked by a raised podium containing shops and a cinema and set over a basement car park on two levels. The outer or perimeter range of five storeys, the inner or main range of eight storeys. Most of the flats on the upper floors have one or two bedrooms, with some studios at the ends, all with glazed living room extending on to balcony, which form a stepped profile down the side of the building. One larger flat and further small flats on the lower floors of the perimeter blocks. The raised ground floor is occupied by a shopping mall, whose projecting form forms two terraces above, linked by a bridge in the early 1990s when steps from the mall were blocked. The professional chambers, intended for functions such as doctor's surgeries, are now leased as offices and workshops. Cinema facing Brunswick Square descends two levels into basement; was originally one screen, but has been subsequently simply subdivided. Basement on two levels has car parking.

The elevations are determined by the plan, with metal windows, and metal balustrading to concrete balconies. Mullions to concealed basement ventilation. Regularly spaced lift-shafts, staircases and ventilator towers reminiscent of Antonio Sant'Elia's scheme of 1914 for Milan Railway Station; there are comparisons too in the formal entrance to the shopping mall opposite Brunswick Square, where the framework of the structure is left open save for the cinema, largely glazed and with glazed doors, sentinel at its entrance. The flats are now entered via modern security doors and the internal 'A'-frame structure is exposed and makes an extremely powerful composition along the landings serving the flats. The internal finishes of the flats, shops and cinema have been inspected, and are not of special interest.

The Brunswick Centre is the pioneering example of a megastructure in England: of a scheme which combines several functions of equal importance within a single framework. It is also the pioneering example of low-rise, high-density housing, a field in which Britain was extremely influential on this scale. The scheme grew out of a theoretical project by Hodgkinson with Sir Leslie Martin for West Kentish Town (St Pancras MB), and his own student work of 1953. This, however, was for a mat of largely four-storied maisonettes using a cross-over or scissor plan, while in section the Brunswick Centre more closely resembled Harvey Court, designed for Gonville and Caius College, Cambridge, in 1957, a design largely developed by Hodgkinson working with Martin and Colin St John Wilson. Brunswick developed the concept of the stepped section on a large scale and for a range of facilities, whose formality was pioneering. It forms an interesting group of reference with Sir Denys Lasdun and Partners' University of East Anglia (desigend 1962-3) and Darbourne and Darke's Lillington Gardens, Westminster (designed 1961). More directly, the housing part of the scheme was taken over in 1965 by LB Camden, and Hodgkinson liaised with the Chief Architect, S A G Cook. His influence on the young architects working for Cook was profound, and can be seen in schemes by Neave Brown, Benson and Forsyth and others built across the borough in the 1970s - and which in their turn were celebrated and imitated on a smaller scale elsewhere. The most celebrated of these schemes is Alexandra Road by Neave Brown, of 1972-8 and listed grade II*, which repeats the use of concrete and the stepped building profile, but achieves greater formality by concentrating solely on the provision of housing, set in a crescent.