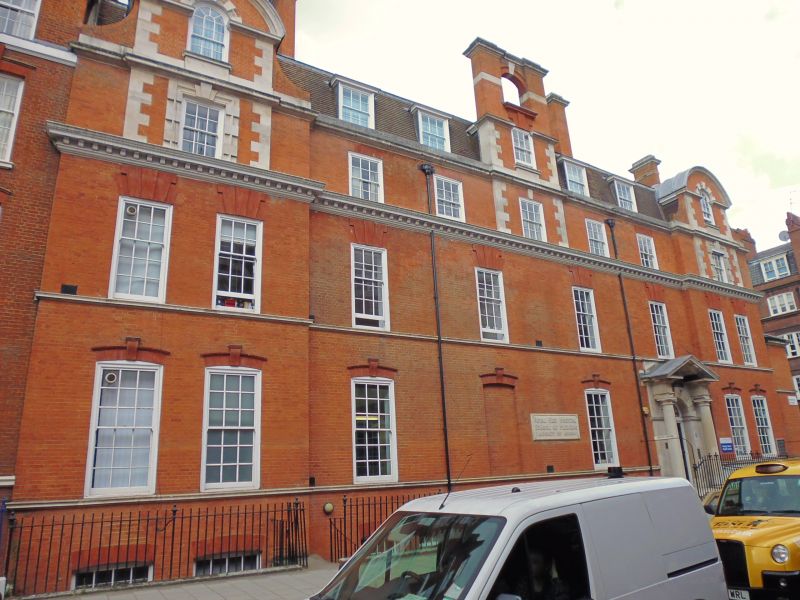 EXTERIOR: To Hunter Street, 3 storeys, attic and basement. 8 windows with slightly advanced end bays. 2 central chimneys banded and linked to form an arch with keystone above a dormer with keystone and section of cornice; dormers to end bays have segmental pediments and barrel roofs, each with a round-arched sash flanked by upswept parapets. Symmetrical design apart from entrance set next to right hand end bay with a Doric doorcase having a broken pediment and round-arched door with patterned fanlight and rusticated voussoirs. Slightly recessed sashes; ground floor segmental-arched with keystone, 1st floor have keystones flanked by lugged voussoirs and continuous sill band, 2nd floor, flat-arched with mutule cornice at sill band level and Gibbs type surrounds to end bay windows. Eaves cornice. Return to Handel Street has stepped and shaped gable with gauged brick detailing, and a 2-storey range below this with broken stone pediment. Then, set back, 9 window bays and a central first floor Venetian style window. Similar stepped and shaped gable to east end with stone banding and gauged brick detailing. To rear of this, facing courtyard, is an advanced squared bay in the corner, with 1st floor wide window under rounded arch with red gauged brickwork surround and corner pilasters, and apron carrying the words: 'LONDON ROYAL FREE HOSPITAL SCHOOL OF MEDICINE FOR WOMEN. Founded 1874. Rebuilt 1897'. The roof in this corner is capped with a cupola and weathervane. Return to Wakefield Street has eight window bays, those to first floor under rounded archesl; those 5 to the courtyard elevation with stone surrounds and gauged brick pilasters. Attached but of lesser interest is the c.1915 range also known as No.2 Wakefield Street.
INTERIOR: Not fully inspected. Metal baluster stairs with scrolled balusters; range along Wakefield Street has metal tension rod truss roof and roof lights; lecture theatre in corner with raked floor and later modifications; C20 modifications throughout for continued institutional use.

HISTORY: The London School of Medicine for Women was founded in 1874, within three years becoming a part of the University of London. The first dean (from 1883-1903) was Dr. Elizabeth Garrett Anderson, the first Englishwoman to qualify in medicine, and an important national figure in medical and women's history. Anderson employed her friend, the notable architect J.M. Brydon for this project, and he has also designed the hospital Elizabeth Garrett Anderson Hospital on the Euston Road (q.v.). The school initially occupied a large house at No.30 Handel Street, but by 1897, with 170 students and leases about to run out, a programme of rebuilding was necessary. The work began on Wakefield Street, which was formally opened in July 1898 and which contained rooms for teaching chemistry, physiology, anatomy and physics. This was funded by Emily Pfeiffer and known as the Pfeiffer wing, with additional funds being contributed after the Princess of Wales agreed to open the building. Work began immediately on the second stage of construction, along Handel Street, which housed 2 lecture theatres, a library, a biological lab and other classrooms, and was completed by autumn 1899. By this time, the old houses on Hunter Street had been demolished and the last stage was built the following year. The school became associated with the Royal Free Hospital during Anderson's deanship, and it was renamed the London (Royal Free Hospital) School of Medicine for Women in 1896.
SOURCES include the following articles: The Sketch, June 15, 1898, p.69; The Daily Graphic, July 12, 1898; Daily News, Sept. 13, 1900; The Builder, April 16, 1898. p.367.

Listed as the former London School of Medicine for Women, rebuilt 1897-1900, under the deanship of the medical pioneer Elizabeth Garrett Anderson to the designs of J.M. Brydon. It has architectural interest for its handsome Queen Anne Style as well as considerable historic importance, for its strong links with Anderson and as an early purpose-built medical school for women.