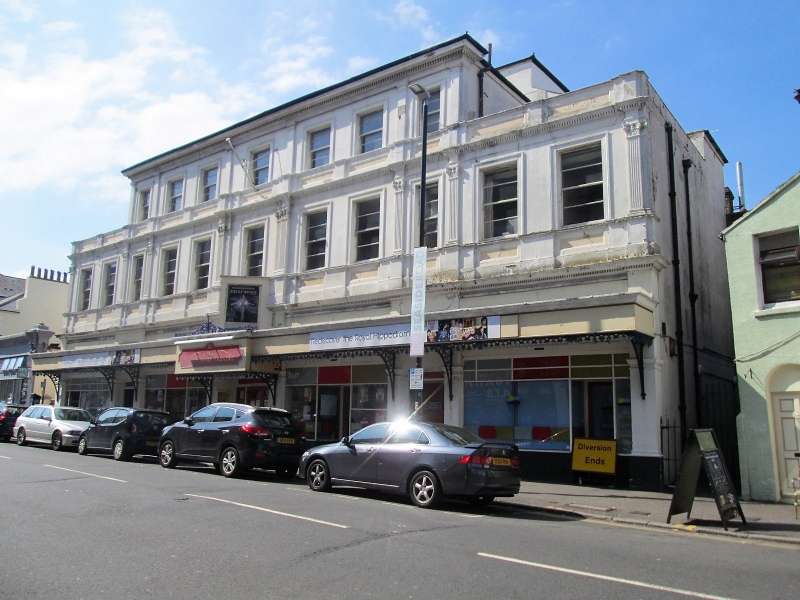 Theatre. Built in 1883 by C J Phipps in Italianate style at a cost of £8000. Box office and shops altered in the 1930s. Some alterations of the 1970s mainly reversed by restoration of c1990. Symmetrical stuccoed front with hipped slate roof (two chimneystacks later removed). Three storeys. The second floor of 7 baya, the first floor of 11 bays and the ground floor designed to incorporate four shops and three entrances. Top floor has dentilled cornice and Tuscan pilasters. Panelled parapets and Composite pilasters to other floors. All windows are late C19 sashes with horns in moulded architraves but with the addition of 1930s horizontal glazing bars. Ground floor has a metal canopy supported on eight large cast iron brackets with central decorative cast iron scrollwork. This was not part of the original design but added soon afterwards following criticism in the local press. Entrances now have 1930s panelled doors. Three 1930s wooden shopfronts with wooden fanlights, shopfront to left later removed.
INTERIOR: Foyer has round-headed entrance arch with stylised capitals and smaller identical arches leading to Stalls and Dress Circle. Box Office window 1930s with chrome surround and 1930s lettering to the glass. Staircase to right with mahogany handrail and section of gilded balusters at the top. Auditorium has panelled proscenium arch supported on two stage boxes, the upper ones with partly fluted Composite columns and a bowed box, the lower ones piers with anthemion mtifs and swags to panels . The upper box and mouldings were restored to the original design c1990 following alterations of the 1970s. Flat circular ceiling with large ceiling rose with plaster mouldings of shell and floral motifs and ribs. Two horseshoe balconies, each supported on six slender iron columns by C W Grove of Leamington; stall columns plain, Dress Circle columns with plumed capitals and central floral design. Arches on square piers with decorated capitals at the back of the Dress Circle lead to a circulation area supported on two Composite cast iron columns. Dress Circle Bar (surviving one of three) redecorated c1990. Stalls and Balcony seats of traditional style. Dress Circle seats mid C20. Original stage with orchestra pit extant but boarded over. The fly floors are original and also the wooden hooks for hanging the hemps. One Dressing Room (Clark) retains original reeded boarding to ceiling and walls and cast iron fireplace.
HISTORY: This theatre was originally called the Theatre Royal and the name was changed to the Royal Hippodrome in 1904. There was originally a manager's flat which no longer exists. It is one of the earliest Variety theatres remaining in the country and most of the famous Variety and Vaudeville artistes from the 1880s onwards have performed here.