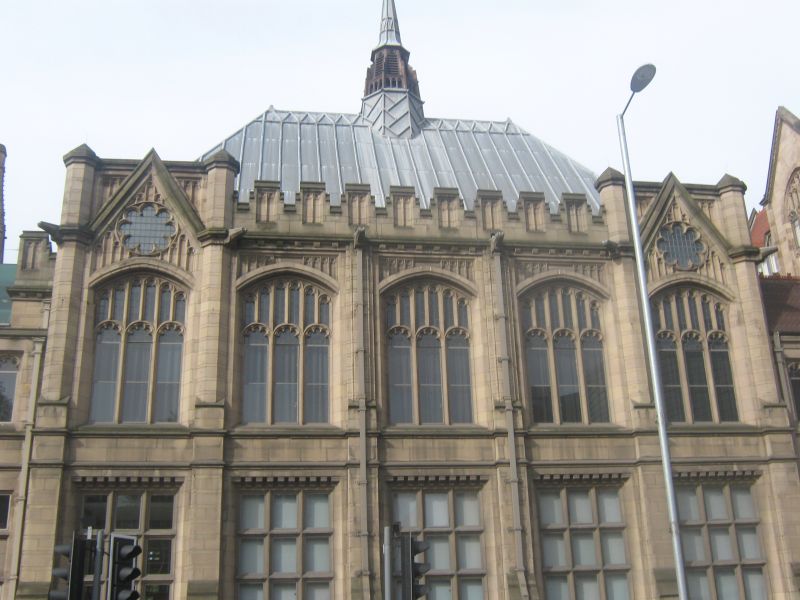 Extensions to the Manchester Museum. Designed 1911 and 1918 by Paul Waterhouse, and built 1911-1927. Paul Waterhouse died in 1924, and the contract was completed by his son, Michael. Sandstone ashlar, with roofs of lead and red tiles. Linear plan in 3 portions, the earliest to the left and the latest to the right. Gothic Revival style. The earlier portion, in Hotel de Ville style, 2 storeys and 5 bays, symmetrical, has buttresses, an embattled parapet to the 3 centre bays and slightly higher square parapets to the end bays penetrated by gablets, and a steeply-pitched lead-clad hipped roof with a fleche; large double-transomed 9-light windows at ground floor, large segmental-pointed 3-light windows at 1st floor with arched lights and 6-light Perpendicular tracery, and gablets in the end bays containing multifoils. Attached at the left end is a 2-storey entrance archway and bridge over the entrance to Coupland Street. This has a large 2-centred arch and three 3-light windows above, the centre under a gable, and incorporates a porter's lodge and curator's room. The central portion, 2 lower storeys and 3 bays, with gabled centre flanked by pilaster buttresses, has windows at ground floor like those to the left, and 3-light windows at 1st floor, all with cusped heads. The central window has Perpendicular tracery rising into the gable The right-hand portion is a cross wing with a facing gable. 4 storeys and attic in one wide gabled bay, with octagonal tourelles at the corners finished with arcaded pinnacles flanking the gable. The lower half is a giant segmental-headed arch with a projecting gabled porch which has a 2-centred arched doorway moulded in 2 orders with shafts, and is otherwise filled by a 7-light window with 14-light Perpendicular tracery; the upper half has mullioned 2, 3 and 2-light windows to the next 2 floors, a band of blind arcading between these, and an attic window with 2-centred arched centre and blind-arcaded surround. The rear of this range has mainly flat-headed windows in a grid pattern, and a central gable with a pointed arched traceried window, flanked by hipped dormers.
SOURCES:
Manchester Museum Annual Reports, 1912, 1923, 1925, 1926, 1927
Signed drawings by Paul Waterhouse, 1911 and 1918.