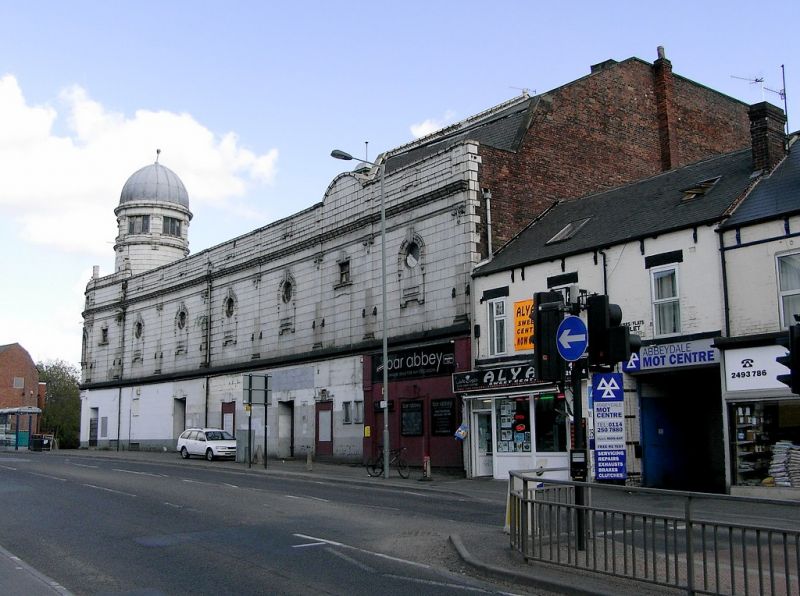 PLAN: Principal frontages to north-west and north-east sides with main entrance to north corner. Secondary entrances to both principal frontages. Auditorium to centre of building with stage and dressing rooms to south-west end, foyers and public rooms to ground, first and second floors at north-east end, along with attic. Basement snooker hall and bar (formerly ballroom and billiards rooms).

Rear elevations: Blank to south-west side. Exit and loading doors to south-east side, multi-paned and 1-over-1 sash windows, some openings blocked-up. Later ramps access the ground floor level.

HISTORY: Abbeydale Picture House was constructed in 1920 for the Abbeydale Picture House Ltd to the designs of Dixon & Stienlet of North Shields. The building was opened on the 20 December 1920 by the Lord Mayor of Sheffield. The original seating capacity within the auditorium is unknown (the original plans were for 1,800, although these figures were normally exaggerated), but records show that in 1934 the capacity was 1,560. A ballroom and billiards hall were originally contained within the basement, and above the entrance foyer was a first floor lounge and cafe; both opened in 1921. The cinema also originally had an orchestra, which was replaced by a 'Clavorchester' organ (now removed) in 1921.

The stage was enlarged in 1928, the ballroom and billiards room altered, and the dressing room facilities were upgraded in anticipation of introducing cine-variety. However, variety was discontinued following the advent of talking pictures in 1930. In 1949 the cinema was extensively redecorated, although it is not known what this actually entailed. A panoramic screen was installed in 1954, and Cinemascope was introduced in 1955 following the building's acquisition by Star Cinemas.

The stalls closed in October 1974 and the final programme was held on the 5 July 1975. The auditorium was later used as a furniture showroom and warehouse, which ceased trading in 1991. In 1983 the ballroom was converted into a snooker hall and the original sprung dance floor was replaced with concrete. Since 1991 the building has been largely unused except for the basement snooker hall and bar.

REASONS FOR DESIGNATION:
Abbeydale Picture House is listed at Grade II for the following principal reasons:
* It is a good example of an early 1920s mid-sized suburban cinema with both cinema and theatre facilities, designed by the cinema architects, Dixon & Stienlet of North Shields
* The imposing Neo-Baroque exterior, which also incorporates Art Deco influences, is relatively unaltered and is highly detailed with faience tiled principal elevations, square and oculus windows with moulded surrounds and double keystones, and a corner turret with stained glass windows and a domed roof
* The Classical style interior retains many original and early features, including plaster decoration throughout, the auditorium with its barrel-vaulted coffered ceiling and balcony to three sides, the original proscenium arch, a rare 1950s iron safety curtain displaying local advertisements, and the former ballroom's ribbed and raked ceiling
* The original layout remains largely intact, including the main circulatory spaces and access routes.