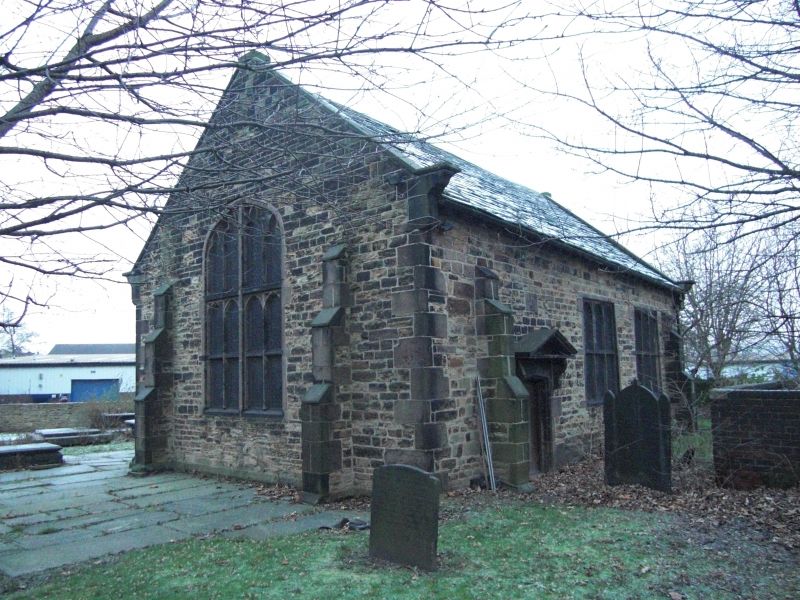 Also known as: Hilltop Chapel ATTERCLIFFE COMMON.
Chapel. c1629. Probably built for the Bright family of
Carbrook Hall. Remodelled c1770 and rebuilt and further
remodelled 1909 by JD Webster. Restored 1991. Squared dressed
stone with ashlar dressings and stone slate roof.
Chamfered plinth, quoins, coped gables with kneelers. Single
storey, single unit. East end has a 4-light transomed lancet
with cusped heads, flanked by single buttresses. West end
blank. South side has to right a shallow Tudor arched doorway
with slate pediment on curved brackets, flanked to left by a
monument bracket and to right by an obelisk tablet with
cartouche. To left, a transomed triple lancet with
round-headed lights under flat head. Beyond, on either side,
single buttresses. North side has to left an oval headed
doorway with similar pediment, and above it a datestone
inscribed "1629 TA HB". To right, 2 transomed triple lancets
similar to the south side.
INTERIOR rendered and has late C18 strutted king post roof
with double purlins.
(The Buildings of England: Pevsner N: Yorkshire: The West
Riding: London: 1967-: 469; Early C19 drawing, post-1817, in
minister's keeping).