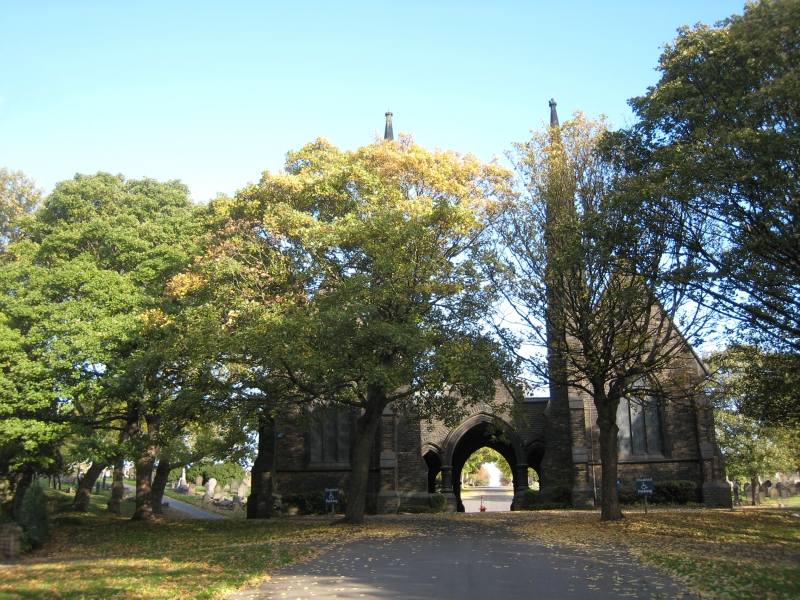 Cemetery chapels, one now used as a store. Dated 1880. By
Holmes & Johnson. Rock-faced stone with ashlar dressings and
steep pitched slate roofs with 2 shouldered coped side wall
stacks. Gothic Revival style. Symmetrical layout with central
entrance bay flanked by chapels with side porches.
EXTERIOR: chamfered plinth and eaves, buttresses, coped
parapets and gables with crosses. Western entrance has a
moulded central arch and smaller flanking arches with round
piers and hoodmoulds. Above, shouldered gable with clock. On
either side, a thin buttressed bell tower with octagonal bell
stage topped with an octagonal spire. To left, dated
foundation stone. Chapel west ends have angle buttresses and
3-light pointed arched windows with Geometrical tracery and
hoodmoulds. The east end has the same design without the bell
towers. The chapels' outer sides have 4 quatrefoil windows and
to east, single gabled porches with single lancets in the
gables, with hoodmoulds. On the east sides, a chamfered cusped
flat-headed doorway. Entrance bay interior has a 3 bay wooden
arcade with turned posts and roll moulded segmental pointed
arches. Strutted common rafter roof. On either side, 2
chamfered doorways with hoodmoulds and double doors.
INTERIOR: rendered chapel interior has string course and arch
braced principal rafter roof with traceried spandrels and
corbels. 2 double doors with depressed segmental heads and
moulded flat canopies with single shafts. On the other side, a
doorway with hoodmould into the porch.
The partnership of Holmes & Johnson existed from 1869-1887,
though SF Holmes died in 1882.
(Researches by G Hague, Sheffield City Council).