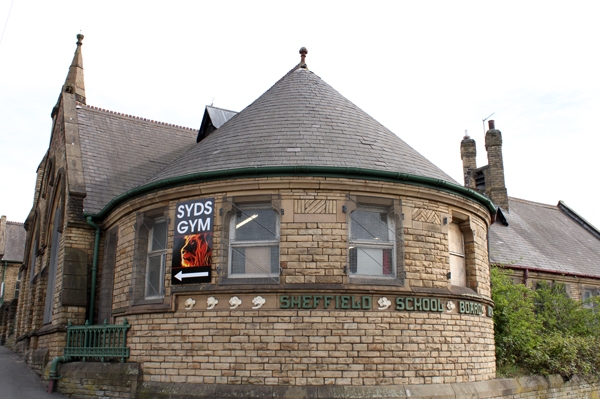 Board school, now district community association premises,
with boundary wall and railing. Dated 1874. By Innocent &
Brown. For the Sheffield School Board. Mid and late C20
alterations. Coursed squared stone with ashlar dressings and
gabled and hipped slate roofs with decorative ridge tiles.
Various lozenge shaped ridge stacks. Gothic Revival style.
EXTERIOR: plinth, sillband, moulded eaves, coped gables.
Single storey plus basement; 8 window range. L-plan. Recessed
centre with 3 through-eaves dormers with coped gables, each
with a shouldered single light casement. Between them, two
2-light shouldered casements. To right, a half-hipped
projecting wing with a pointed arched doorway to left, with
hoodmould and shouldered fanlight. To its right, a shouldered
2-light window, and a basement opening below it. At the
corner, a projecting buttress with a pointed arched inscribed
panel, topped with a round bellcote with cusped lancet opening
and octagonal spire with finial.
To right again, set back gable to cross-wing, with a tall
central lancet with transom and hoodmould, flanked by larger
pointed arched recesses with shouldered double lancets, with
transoms and linked hoodmoulds. Gable has finial and 5 slit
ventilators.
To left, 2 gables linked by a parapet with lancet opening.
Smaller right gable has a graduated 3-light pointed arched
window with transoms. Larger left gable has a shouldered
2-light pointed arched window, flanked by shouldered single
lancets, all with transoms. To left again, a set back range
with a large through eaves dormer to right, with single
lancet.
Right return has to left a rounded projection with inscribed
band and conical roof with finial. 6 shouldered windows. To
right, four 2-light shouldered windows.
Left return has a gable with pointed arched recess containing
a graduated 4-light pointed arched window. To its left, a
dormer with a single window.
INTERIOR not inspected.
SUBSIDIARY FEATURES: outside, to right, a stone boundary wall
with stepped ashlar coping and 3 sections of cast-iron railing
and a pair of cast-iron gates. To left, a similar wall topped
with cast-iron railing, and a pair of square gate piers with
flat caps and cast-iron gates.
This building is one of a number designed by Innocent & Brown
for the Sheffield School Board, and is amongst the earliest in
England to be built after the 1870 Education Act.
(Researches by G Hague, Sheffield City Council; Innocent &
Brown: Illustrations of Public Elementary Schools (etc):
Sheffield: 1873-: RIBA LIBRARY).