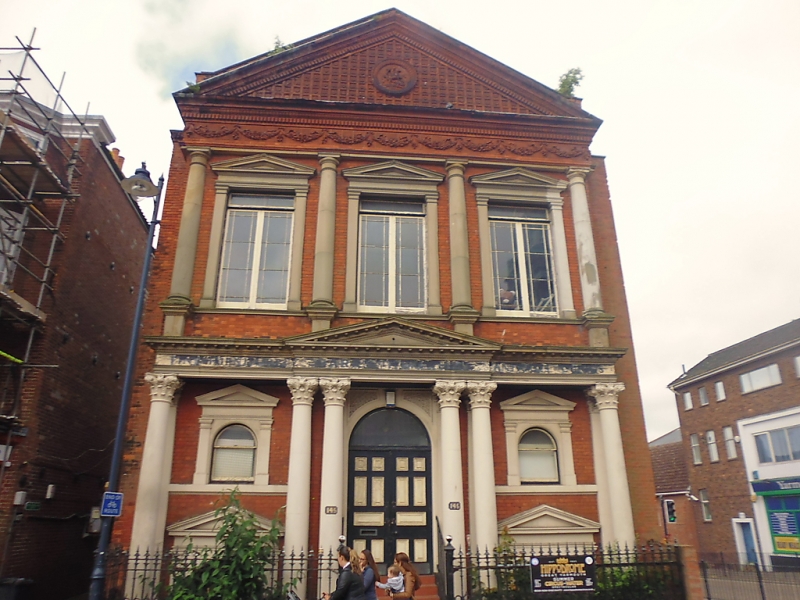 Formerly known as: No.145 St George's Church Rooms KING
STREET.
Church rooms to Church of St George (qv), now a furniture
showroom and warehouse. 1891. By Charles Baker. Partly rebuilt
1953. Red brick with York stone and terracotta dressings.
Concrete tile roof.
EXTERIOR: 2 storeys and basement. Facade faces east; 3-window
range. Basement windows with pediments. Ground floor with an
entablature supported on unfluted Composite Order columns
arranged in 2 pairs in the centre and single columns at the
ends. Behind are wall pilasters. Round-arched central door
with vermiculated spandrels and one round-arched window right
and left within pedimented surrounds. The entablature has a
central pediment. First floor with 3 casement windows under
pediments separated by 4 Tuscan Order columns which rise to a
terracotta frieze. The frieze has swags of fruit and flowers.
Full-width pediment above set with terracotta fleuron and
rosette tiles and, in the centre, an equestrian tile.
INTERIOR: basement disposition of 3 classrooms and offices
still discernible. 2-bay entrance narthex with a
stick-baluster staircase at north-east corner. Upper floor has
been divided into 2 floors. Gallery at east end with cast-iron
balcony railings and a pair of cast-iron columns with
Corinthian capitals. West end of main room with large archway.
Roof structure of arched braces rising to king posts.
SUBSIDIARY FEATURES: to east, cast-iron, with ball finials to
the standards, ornate finials to the shafts and scrolls over
the bottom rails. North return rebuilt 1953.