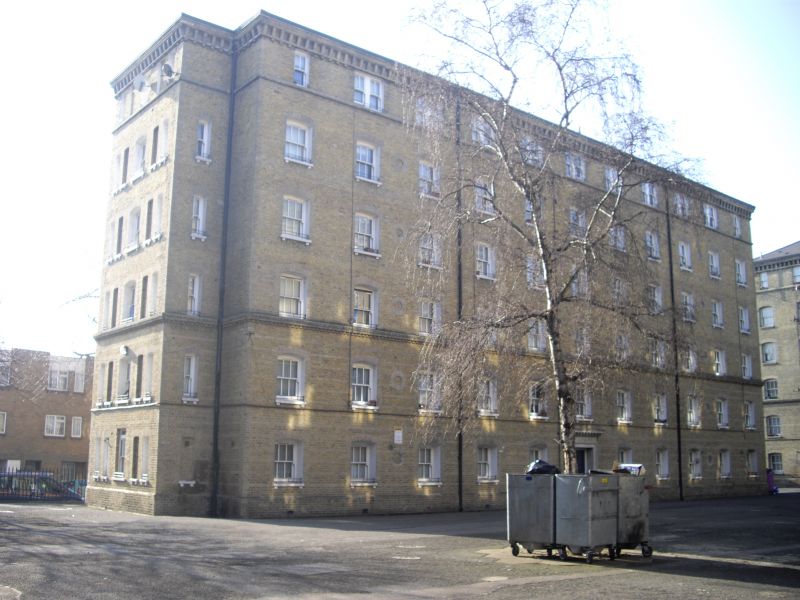 Part of estate built for the Peabody Trust in 1866 to the designs of Henry Darbishire. Four large blocks of similar appearance and materials, arranged so as to form a rectangular courtyard. Brick in English bond with hipped slate roofs and tall brick stacks. Rectangular plan, the long sides having an eleven-window range. Six storeys divided into three horizontal bands: a two-storey base, a three-storey middle section, and a top storey treated as an attic. Sill bands mark these divisions and there is a deep bracketed cornice on top. Brick banding on the ground storey. Blind brick roundels are placed between the second and third-window ranges and between the ninth and tenth-window ranges. The short returns have rectangular projections (originally common kitchens) set with narrower windows. All windows are timber sashes with glazing bars. Central door modernised for security. In the rear of each block was an open stairwell, which has been infilled in yellow tiles since the war. Interior retains staircase with cast-iron balustrade. Cast-iron railings and gatepiers to street.

Peabody flats were austere housing blocks for the 'artisan and labouring poor of London' built by a Trust set up by the American philanthropist, George Peabody. Born in 1795 in Massachusetts, he spent most of his later life in London after a successful career in shipping. In March 1862 he gave o150,000, later raised to o500,00 to endow a fund `to ameliorate the condition of the poor and needy of this great metropolis and to promote their comfort and happiness'. The fund was not restricted to the provision of housing but the Trustees decided that a proportion of the Trust should be applied to the provision of `cheap, cleanly, well-drained and healthful dwellings for the poor.'