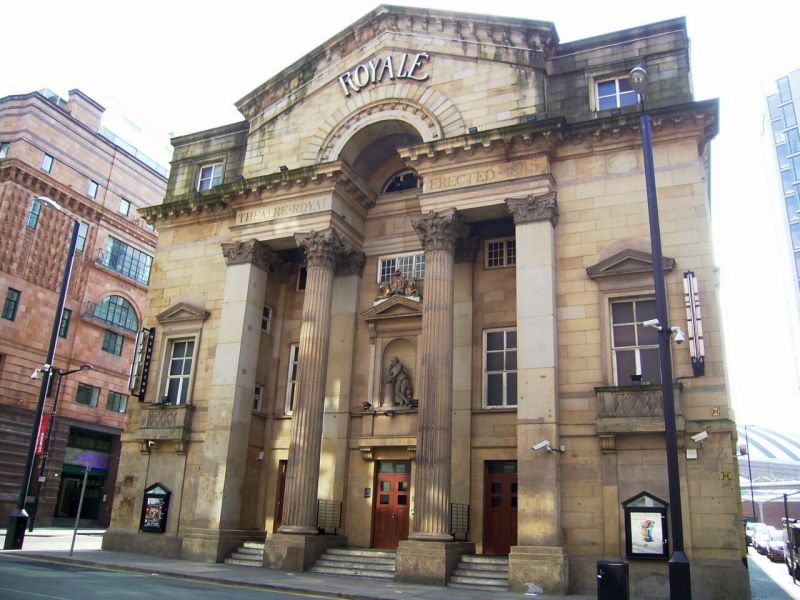 Theatre, now night club. 1845, by Irwin and Chester; altered
1875 by Edward Salomons; exterior restored and interior
remodelled 1989. Sandstone ashlar (roof not visible).
Rectangular plan on island site (except for south-east corner
occupied by other premises). Classical style. Two storeys and
attic; monumental facade of 3 unequal bays, symmetrical, with
plinth, modillioned cornice, attic treated as parapet and
gabled in the centre. The centre, which breaks forwards
slightly, is treated as a giant recessed portico with fluted
Corinthian columns distyle in antis, the entablature
interrupted by a central semicircular arch breaking into the
gable above, and the frieze inscribed "THEATRE.ROYAL"
"ERECTED.1845"; and contains steps up to 3 altered doorways, a
pedimented aedicule in the centre with a statue of Shakespeare
leaning on a pedestal, tall windows flanking this, low windows
to the floor above, and a lunette under the arch. The narrower
side bays have windows at 1st-floor level with pedimented
architraves, and square wndows to the attic. The return sides
have (inter alia) alternating rectangular panels and windows
to the main floor with fluted friezes to the panels and
semi-circular blank arches over the windows. Interior:
altered, but retains balcony of 1875. History: Manchester's
oldest surviving theatre.