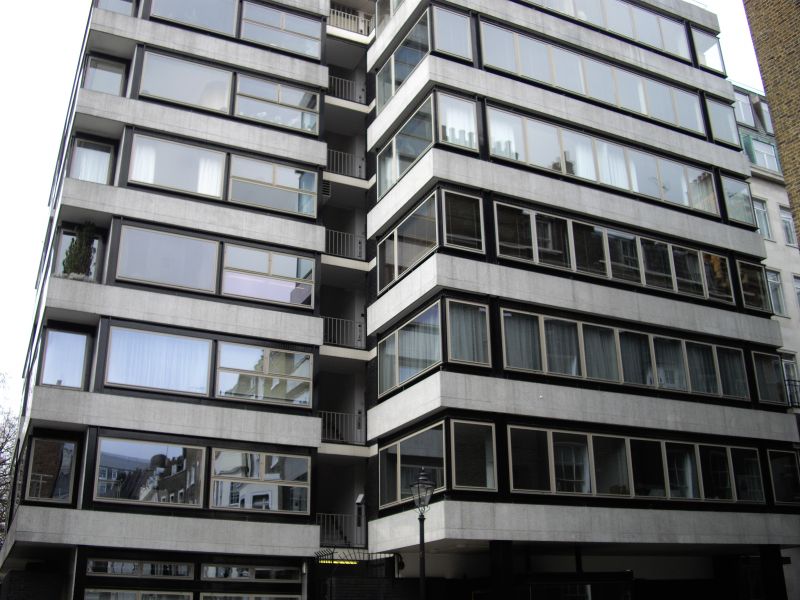 Block of eight luxury flats. 1959-60 by (Sir) Denys Lasdun and Partners; Alexander Redhouse partner in charge; Graham Lane, Lyall Anderson and Maya Hambly assistant architect; Ove Arup and Partners, engineers. Reinforced concrete structure clad with Baveno grey granite with white vitreous mosaic on the soffits. Window subframes of pressed grain-blasted bronze sections. External ducts faced with blue engineering bricks. Rectangular site plan. Three storeys of smaller rooms to the north are set against two floors of high-ceiling living rooms on the corner overlooking the park. Basement garage and caretaker's flat, one small flat with garden on ground floor. The main accommodation consists of four large and two smaller flats on the first to sixth floors, and a penthouse flat above with its own roof garden on top. The four large flats have split-level planning, the small flats are set on one level only. The building is supported on a concrete service core, with floor slabs and posts in the centre of each elevation expressed externally. On the park front the split levels are expressed by bands of granite, and set-back vertical divide between the section on south-west corner which has the higher floor heights. Cantilevered balconies with thin metal balustrade. On side elevation the vertical distinction between the higher and lower areas is denoted in brick. Entrance front of six storeys marked bay granite bands. Vertically set windows with set back weatherings on right-hand side, to the left, horizontally set windows, part divided, over ground floor entrance. Penthouse set back behind terrace, board-marked, with cantilevered roof slab over. All windows double-glazed. Interiors spatially complex, but designed to be as flexible as possible for services. Main staircase and the staircases within the larger flats cantilevered and with open treads. Built on the site of two Georgian houses, which were destroyed in the War. The aim of the design 'was to produce a building of our time which would, in terms of urban renewal, concern itself with the relationship between buildings of historic interest and modern architecture' (Architectural Design, November 1961, p.511). It forms a spectacular group, contrasting but sympathetic, with the adjoining grade I Spencer House. Ian Nairn considered it 'a triumphant justification of putting completely modern buildings right next to the eighteenth century. It is a real tour-de-force and only a very few British architects could have brought it off' (Architects' Journal, 29 June 1961, p.968). The feat can be seen in the context of Denys Lasdun's ideas on 'grain' and city planning. Though at the opposite end of the market from his earlier flats in Claredale Street (of which Keeling House is already listed), the idea of retaining the existing urban character of an area while injecting a thoroughly modern design is common to both. The idea of the 3:2 split-level plan derives from Melnikov and in Britain from Wells Coates's No. 10 Palace Gate, on which Lasdun had worked as an assistant. He had also worked with Berthold Lubetkin, whose 2:1 plan for Highpoint II was a less sophisticated method of gaining extra space in luxury accommodation. No. 26 St James's Place was awarded the RIBA London Architecture Bronze Medal for 1960. 'A building which does not look mean in scale when compared with its spacious neighbours. A fine abstracted composition which, nevertheless, answers and expresses the requirements of the way the building should work', Sir Philip Powell, in Architects' Journal, 15 January 1964, p.153. St James's Place is of significance as Lasdun's first mature work, in which the balance of contrasting planes and strong horizontals that are the language of his work achieve a cohesion and confidence, aided here by the exceptional materials at his disposal.