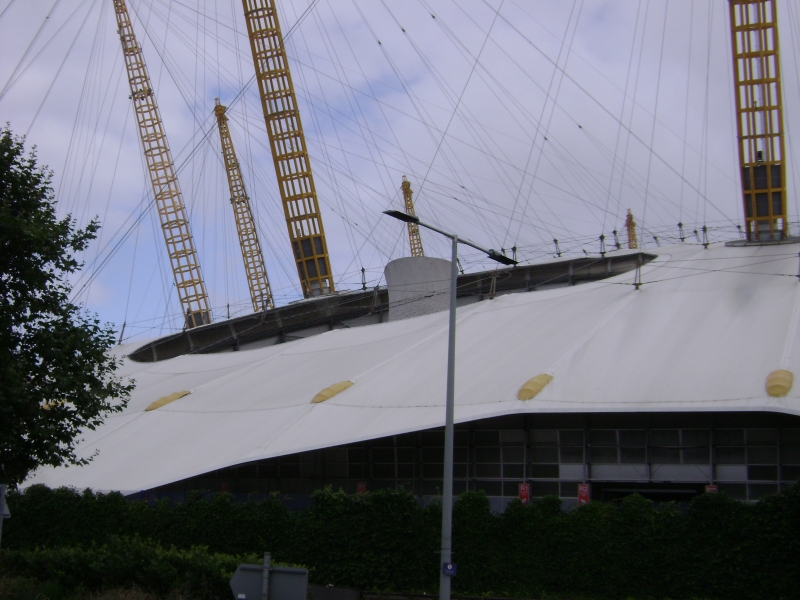 II
Ventilation tower for the forced air and exhaust equipment serving the southward Blackwall Tunnel. Designed 1961-2, built 1964-7 by the London County Council's Architect's Department Special Works Division, subsequently that of the Greater London Council, group leader Eric Hayes, job architect Terry Farrell. The engineers were Flint and Neill, working with the Cement Gun Company and the LCC/GLC's Engineer's Department. Sprayed concrete (gunite) shells supported on stressed cables from a reinforced concrete slab, over perimeter walls of blue brick and glass. The shell roof is supported from the slab, which contains instruments. The concrete grillage holding this includes a spiral stair and a crawl-way ducting system linking the electrical installation to the motors from the switch room and transformers, and contains an airlock access to the tunnel below. The instruments measure the air pollution. The shells, coated with bitumen and cement paint to prevent corrosion, were an early use of gunite as a building material, rather than a repair material, chosen because it reduced the need for expensive shuttering.

The ventilation towers were the principal work of Terry Farrell when he was briefly employed at the LCC between September 1961 and March or April 1962. Their curved form was inspired by Oscar Niemeyer's work at Brasilia, then first appearing in the architectural press. Farrell compares the romantic structure of these very industrial buildings with the rugged machine aesthetic subsequently adopted for housing and office buildings in the Poplar area, and the curved forms of the two ventilation towers makes a strong contrast with the nearby Reuter's Building and Robin Hood Gardens. They remain unique in Farrell's built oeuvre, which was subsequently to be more inspired by contemporary American architecture, and in particular by the work of Louis Kahn, under whom he subsequently studied at the University of Pennsylvania.

Included as a work of striking architectural quality. The southbound Blackwall Tunnel itself, and the Millennium Dome erected around it in 1997-9, are not included in the listing.