A Grade II Listed Building in Loftus, Redcar and Cleveland 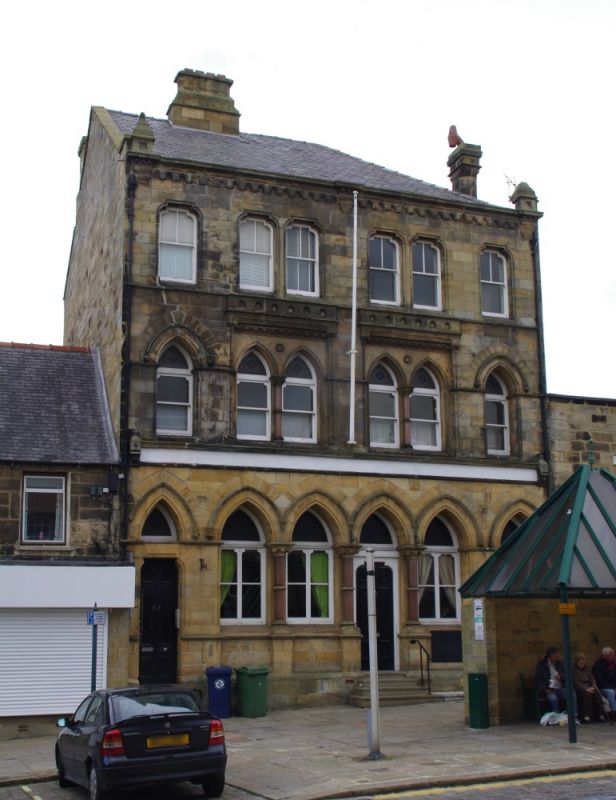 Bank with bank managers' accommodation above, now vacant. 1877-8. Designed by Alfred J Martin of Darlington and built by J Dickenson of Saltburn for the National Provincial Bank of England. Ashlar with Welsh slate roofs. 3 storeys. Half hipped roof has moulded central stack and single tall stone stack to right.
Street front has chamfered plinth. Ground floor has 4 central linked pointed arches, flanked by single similar arches. Central arches have off-centre doorway with double panel door in shouldered archway with upper Gothic overlight. Single polished marble column to right and 2 similar columns to left all with elaborate carved capitals, executed by Farmer & Brindley of London. All these windows have casement windows with pointed overlights. The outer right arch has another casement and the outer left arch a door with overlight. All these arches have moulded hoods with label stops. Stone bands above define fascia board with moulded corbels at either end, this also forms a continuous cill band to first floor windows. First floor has 2 pairs of pointed arched windows with polished marble columns between in sunken surrounds with sash windows and overlights, set in sunken surrounds with false linking balconies. Either side single pointed arch windows with sashes and overlights, impost bands and moulded hoods with stops. Top floor has similar window arrangement with sash windows in shouldered surrounds and continuous cill band. Moulded eaves cornice has central and corner corbels, those outer ones with pyramidal caps.