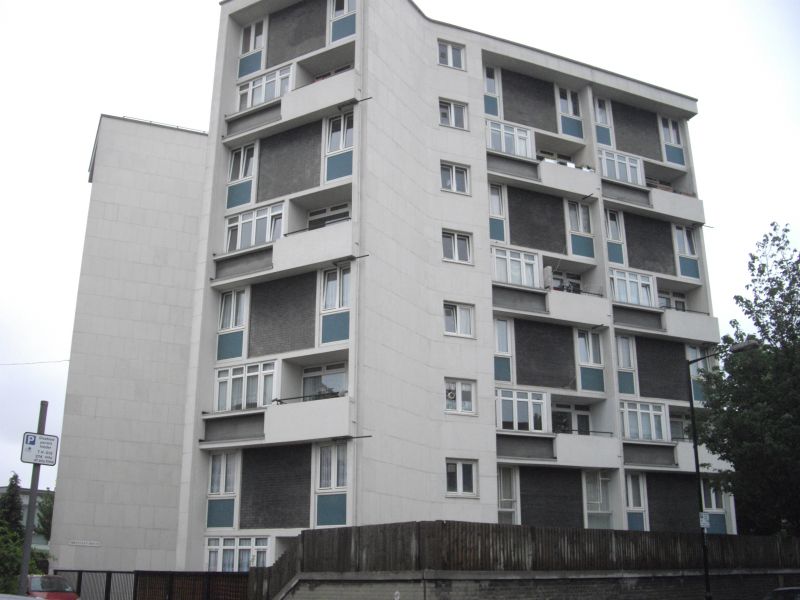 Block of 24 maisonettes. Designed 1952-3, built 1956-8 by Denys Lasdun (Fry, Drew, Drake and Lasdun) Margaret Rodd assistant architect. Ove Amp and Partners engineers. Reinforced concrete cross-wall construction with ends formed of pre-cast permanent shuttering and some brick cladding. Eight floors (four maisonettes) high over basement; six units per floor set in butterfly plan of two ranges, the rear unit in each group of three set at right angles to the other pair. The ranges set around central lift tower and staircase treated as a distinct element in the composition and linked to the housing only by access landings. This plan form, refined became known as the "cluster" block. Original-style doors abutting original metal windows to hallways. All other windows renewed in UPVC, save those to No.2 which has full set of original windows with opening casements and glazed panels under each. Projecting copings and balconies. All maisonettes have an L-shaped lounge with balcony and kitchen on ground floor, and two bedrooms and bathroom over; their fittings not of special interest.
HISTORY: Bethnal Green Metropolitan Borough was one of the most progressive housing authorities in London, 'whose dynamic policy of providing new housing was constrained by the limited amount of land available within the borough. Faced with a need to build on an awkward collection of small sites at a high density but with a housing committee reluctant to sanction extensive lifts or building high, Lasdun's combination of eight and four-storey blocks found on the St Simon Zelotes and No. Usk Street No.2 sites was an efficient compromise.
The taller blocks are significant in introducing a nascent form of "cluster block", which anticipated his fully refined and mature work at Claredale Street (1957-9, also listed.), before Lasdun visited America in 1954 and before Kevin Lynch's article on 'The Form of Cities' was published there the same year and made the phrase popular. The concept is related also to Lasdun and Lynch's theories of the 'grain' of cities. A cluster block could be fitted into a small site as here without disturbing the existing street pattern or character. By clustering his flats in separate elements around a detached core Lasdun broke down the bulk of his blocks, while segregating the noisy service functions from the flats to either side. The flats thus gained in privacy, yet their grouping ensured that the traditional neighbourliness of the old slums was transported here. The concept was also efficient here: the separate service tower removes the need for a secondary escape stair, whilst Lasdun ensured he provided the maximum accommodation permitted round a single lift. Maisonettes were a particularly efficient and popular method of providing generously proportioned housing within government defined budgets in the mid 1950s.
Trevelyan House forms a group with Sulkin House (item 10065) (also listed, though it was started slightly later) and three lower blocks by Lasdun, one incorporating a nursery; smaller flats were provided in the adjoining development by Yorke Rosenberg Mardall to which the scheme is also related. In 1958 the two developments became collectively known as the Greenways Estate. Trevelyan and Sulkin Houses were intended to be landmarks: 'In their primary job of giving identity tl1ey certainly succeed, buzzing like alarm clocks in a part of London which is being steadily drained of its character' wrote Ian Nairn. Included for their important and early contribution to new ideas in urban housing, and for their sculptural architectural form.
Source: (Bethnal Green Housing Committee Minute Books: Vol. XVII-XXVI: 1951-1958; Architectural Review: January 1954; Architectural Design: April 1956; 125-27; Architectural Design: February 1958: 62)